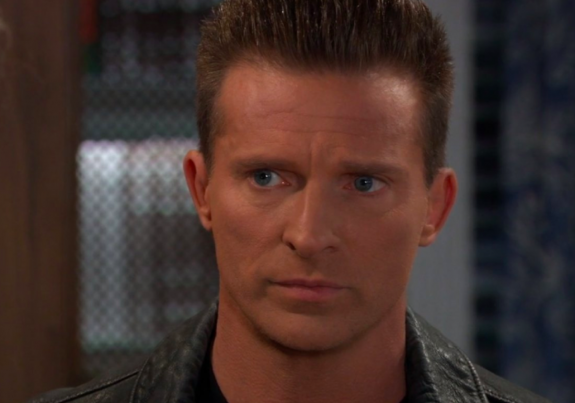 Jason talks to Peter. Jason wonders what Franco Baldwin (Roger Howarth) might remember. Peter excuses himself to visit Liz Baldwin (Rebecca Herbst). Liz tells Peter she owes him a debt of gratitude. Peter pumps Liz for information about Franco. Liz decides to check in on Franco.

General Hospital’s Anna Devane (Finola Hughes) is with Liz checking on Franco. Liz and Anna discuss Peter saving Franco. Jason approaches Anna and tells her Peter is the reason Sam McCall (Kelly Monaco) is in prison. Jason tells Anna that Peter helped Shiloh Archer (Coby Ryan McLaughlin) escape. Peter hired the hitman that tried to kill Andre Maddox (Anthony Montgomery). Anna thinks Jason just wants to get back at Peter for holding him for five years. Jason tells Anna that Peter is targeting Sam. Anna doesn’t know what Jason wants her to do. Jason says Anna knows but will she do it.

General Hospital’s Ava Jerome (Maura West) is at Sonny’s Corinthos’ (Maurice Benard) house. Avery Corinthos (Ava and Grace Scarola) wanted to see Ava. Ava thanks Sonny and Carly for taking care of Avery. Carly reminds Ava of using Mike Corbin’s (Max Gail) disease to get access to Avery. Ava tells Carly she hopes Lucas Jones (Ryan Carnes) is ok. Ava decides to have an auction. Ava tells Trina Robinson (Sydney McKayla) what she needs her to order. Ava plans to auction off the portrait as well. Ava calls Sonny again and thanks him. Ava thinks she and Sonny are in a good place. Sonny offers to set up a new visit soon.

General Hospital’s Sonny tells Carly the baby sang herself to sleep. Carly tells Sonny she knows what happened with Mike last night. Sonny and Carly argue over Jasper Jacks (Ingo Rademacher). Carly can’t tell Sonny what she found out. Carly refuses to tell Sonny the secret. Jax texts Carly and she leaves although Sonny asked her not to. Carly and Jax meet Nik who says they have a lot to discuss. Carly tells Nik that Ava knows he’s alive. Nik admits to haunting Ava.

General Hospital’s Valentin and Charlotte are on the docks. Charlotte sees Nikolas Cassadine (Marcus Coloma) and tells him she knows who he is. Nik tells Charlotte that he saved her mother once too. Valentin later asks Charlotte who she was talking to. Charlotte claims to have spoken to a stranger. Valentin tells Charlotte she knows not to speak to strangers. Valentin talks to Curtis about not speaking to Nina. Curtis says he will do better.

As always, more detailed spoilers and a full collection of pictures for the week in question will appear here on Hollywood Hiccups, when there could be more clues and hints over exactly what’s going on. General Hospital airs weekdays on the ABC network.