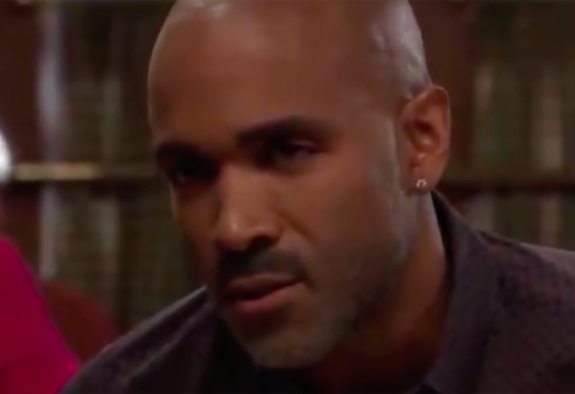 General Hospital (GH) spoilers for Monday, December 16, tease that there’ll be more concerns about Charlotte Cassadine’s (Genie Francis) well-being. After Charlotte confided about her “secret bodyguard,” Laura Webber (Genie Francis) guessed maybe Charlotte had invented him as a way to cope with PTSD. That’s obviously something Lulu Spencer (Emme Rylan) should know about, so it seems Laura will pass along some updates on Monday.

GH Spoilers: Charlotte Cassadine Will Make People Concerned For Her Well Being

Afterward, Charlotte will seem as chipper as ever when she speaks with Lulu and Dustin Phillips (Mark Lawson). She’ll create some uncomfortable moments when she asks if they’re going to have a sleepover, but that’s just the kind of thing kids do! Over with Nikolas Cassadine (Marcus Coloma), he’ll get a warning from Jasper “Jax” Jacks (Ingo Rademacher). Jax will snap that Nik needs to stop interrupting so he can make it happen.

“It” could mean getting their hands on the portrait, which contains the much-talked-about codicil. Jax knows Nikolas has a tendency to blow up every plan he’s involved in. He really needs him to stay as far away from the gallery as possible! Speaking of the gallery, a bidding war is set to play out there soon. Valentin Cassadine (James Patrick Stuart) will be brimming with confidence as he apparently approaches Jax.

General Hospital spoilers say Jax will be determined to outbid him, but Valentin will suggest they should let the best man win. Of course, they shouldn’t count out a woman! Laura will show up to join the auction chaos eventually – and she’ll be willing to pay half a million dollars for the world’s creepiest painting.

As for Nina Reeves (Cynthia Watros), she’ll raise a glass and “cheers” to Ava Jerome’s (Maura West) plan. Curtis Ashford (Donnell Turner) will catch Nina and perhaps wonder why she’s so chummy with Ava now. The wheels will start turning as Curtis grills Nina, so we’ll see what he can figure out.

Speaking of figuring things out, Anna Devane (Finola Hughes) is finally facing doubts about Peter August (Wes Ramsey). She tried to tell Jason Morgan (Steve Burton) he had it all wrong, but it’s easy to see that she was rattled. When Anna subtly confronts Peter, he’ll put on the same old innocent act. Monday’s GH preview shows Peter saying, “You don’t think I’m lying to you, do you?”

Anna may suggest she believes Peter’s side of the story, but she just wouldn’t be Anna Devane if she didn’t dig for the truth! This isn’t over, so Peter had better watch his back. Meanwhile, Andre Maddox (Anthony Montgomery) will reveal Franco Baldwin’s (Roger Howarth) DNR order to Elizabeth Baldwin (Rebecca Herbst) and Cameron Webber (William Lipton). They’ll have concerns about losing Franco, but he’ll thankfully wake up soon.

That’ll just leave Liz and Cam to find out if Franco is Franco again or if he’s still “Drew Cain.” General Hospital spoilers hint that Franco will indeed be back to his old self for Christmas, so stay tuned. We’ll keep you posted as other GH news comes in. Stick with the ABC soap and don’t forget to check back often for the latest General Hospital spoilers, updates and news.