General Hospital Spoilers: Nelle Plays It Cool! Will She Be Granted Parole? 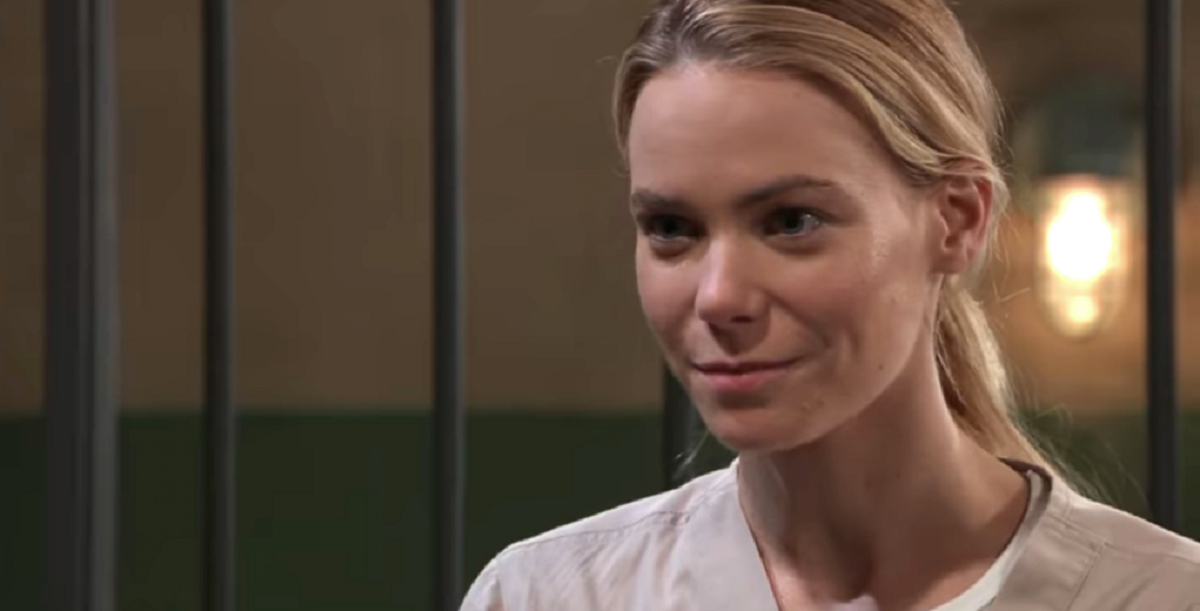 General Hospital (GH) spoilers tease that Nelle Benson (Chloe Lanier) will play it cool in an upcoming episode of GH! Nelle has been in Pentonville Prison waiting on parole. It was not granted the first time, but she is still working on it with the help of Attorney Martin Gray (Michael E. Knight).

She was imprisoned for the attempted murder of Michael Corinthos (Chad Duell), the father of her son, Jonah Corinthos (Erik and Theodore Olson) after Michael and Nelle’s ex-lover, Detective Harrison Chase (Josh Swickard) caused her booby-trapping of Michael’s car to backfire on her, including setting up a secret recording of her admitting to trying to kill Michael.

She also had some other charges along with that main charge. However, through good behavior, Nelle has managed to win herself some freedoms – inside the prison, such as being able to walk about freely as she has been doing various jobs, including the prisoners’ laundry. In that way, she was able to make friends with Ryan Chamberlain (Jon Lindstrom) with whom she formed a strong bond over hatred of Carly Corinthos (Laura Wright), the Quartermaines, and both “having a kidney stolen”.

She also apparently married Shiloh Archer (Coby Ryan McLaughlin) behind the bars of the prison, having made herself the beneficiary of Oscar Nero Quartermaine’s (Garren Lake Stitt) ELQ shares when Shiloh was killed; or so she thought. Shiloh was not in the loop when Oscar changed his will, donating his shares to start the Kilimanjaro Foundation, which was to help teenagers to learn to mountain climb and be able to climb Mount Kilimanjaro.

On the night she escaped the crashed car, with Michael unconscious, she went into labor! Sonny Corinthos (Maurice Benard) rescued Michael, but Nelle, as she ran from the scene, thinking the car was going to blow up, had her water break! Luckily, or perhaps not so luckily, Liesl Obrecht (Kathleen Gati) who was a fugitive at the time for the kidnapping and torture of Peter August (Wes Ramsey) was also in the area.

General Hospital Recap Monday, December 9: Franco is going to have the procedure – Ava has a surprise visitor https://t.co/lcBUAwvTxp pic.twitter.com/N6GKIFlgaO

Liesl helped Nelle by delivering her baby and then disappeared into the woods. Nelle was lucky; and she was lucky again when a devastated Brad Cooper (Parry Shen) was also driving down the same road, and stopped to assist Nelle and her newborn by offering to pick them up.

Nelle learned that Brad and Lucas Jones’ (Ryan Carnes) newly adopted son, Wiley Cooper-Jones (Erik and Theodore Olson) had sadly died of sudden infant death syndrome, and the dead baby was in Brad’s back seat. Nelle told Brad what had happened with Jonah coming early and that she knew the police were after her. She didn’t want Jonah to go to the Corinthos family and so she gave Brad Jonah and she took Wiley, solving both their problems and she waited with the dead baby until she and he were picked up and she told Michael that their son was stillborn.

Now Nelle is the cellmate of Samantha McCall (Kelly Monaco), the birth sister of Lucas, or half-sister since they only share Julian Jerome (William DeVry) as their birth father. When Lucas and Brad were in a serious car crash, which actually was Julian’s fault since he cut a wire to the electronic braking system of Brad’s car, intending to kill Brad, of course someone had to notify Sam that her brother had been seriously injured and in a coma. Chase was tasked with that, and Nelle, off her guard and off her game, overreacted as she immediately wanted to know about Wiley!

Chase kept telling her to shut up until Sam herself asked about Wiley, and was reassured that Wiley had been with Michael and not in the car at the time. Then Nelle realized she’d better try to cover and asked about her good friend Brad. Other General Hospital spoilers tease that Chase made a discovery, possibly of the tampering with Brad’s car, and Commissioner Jordan Ashford (Briana Nicole Henry) shows no mercy, and then Julian loses his temper, likely because Brad throws him under the bus and tells police that Julian has been trying to kill him!