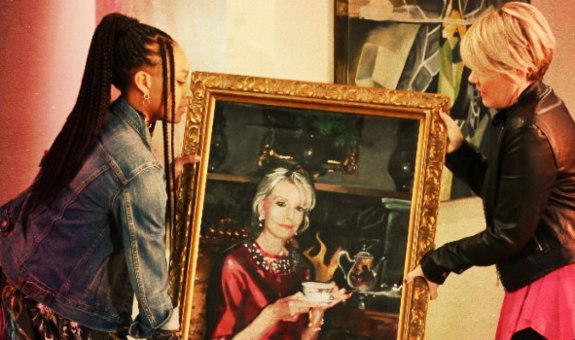 Laura wants to talk to Valentin about his daughter. Laura asks Valentin about the bodyguard, he has no idea what she’s talking about. Valentin would tell Lulu is he hired someone. Laura tells Valentin his daughter is convinced she has a secret bodyguard. Nike tells Jax he is determined to take the portrait home no matter what. Jax questions Nik’s plan. Jax arrives to see Nina and Ava talking. Curtis asks what Nina and Ava are toasting.

Trina talks to Laura about the portrait. Trina wishes Laura good luck. Valentin asks about what Jax is bidding on. Jax plans to win the portrait. Curtis claims to have proof that Valentin is lying about Sasha Gilmore (Sofia Mattsson) and he can prove it. The bidding begins for the portrait. Curtis is shocked that Nina doesn’t seem surprised by his evidence. Nina tries to stop Jax from bidding on the portrait. Nina pulls Jax away, Laura bids in his absence. Laura wins the painting as it bursts into flames.

General Hospital’s Cameron Webber (William Lipton) joins his mother Liz Webber (Rebecca Herbst) as they wait for Franco Baldwin (Roger Howarth) to wake up. Liz and Cameron are shocked when Andre Maddox (Anthony Montgomery) tells them that Franco signed a DNR. Cameron wonders how long they have to wait on Franco to wake up. Andre runs to Franco’s room as his eyes begin to flutter. Andre says Franco is closer to consciousness. Franco opens his eyes.

General Hospital’s Peter August (Wes Ramsey) is waiting outside Franco’s door. Andre invites Peter in the room and thanks him again. Andre says this is twice that someone has tried to stop this procedure. Anna Devane (Finola Hughes) talks to Hamilton Finn (Michael Easton) but can’t join him for dinner. Anna watches Peter from outside Franco’s room. Andre and Peter join Anna in the hallway.

General Hospital’s Lulu Spencer (Emme Rylan), Dustin Phillips (Mark Lawson), and Lulu’s kids go to the Metrocourt for ice cream. Charlotte Cassadine (Scarlett Fernandez) asks if Lulu is having a sleepover with Dustin. Charlotte tells Lulu that Nina used to sleep over all the time. Dustin gives the kids money for ice cream.

Dustin and Lulu discuss their relationship. Dustin thinks they are getting serious. Lulu says they skipped a few steps. Dustin will wait however long it takes. Lulu asks Dustin if he wants to have a sleepover. Charlotte is determined to prove her bodyguard exists. Charlotte jumps into the water to prove she has a bodyguard.

Chase tells Finn that Willow has a lot going on. Finn asks Chase about Nelle Benson (Chloe Lanier). Finn offers to listen to Chase. Chase tells Finn about the pregnancy scare. Willow and Maxie talk outside. Maxie is trying to keep her mind off Lucas. Maxie talks about Peter moving in with her. Chase tells Finn he’s not ready to be a father. Finn tells Chase he will be a good dad when the time comes.

Chase tells Finn that thinking she was pregnant brought back a lot about being pregnant with Wiley Cooper-Jones (Theo and Erik Olson). Maxie tells Willow about her custody battle for her daughter. Willow excuses herself to visit the hospital. Chase tells Finn he understands this is hard on Willow. Finn says Anna still struggles with giving away Peter.