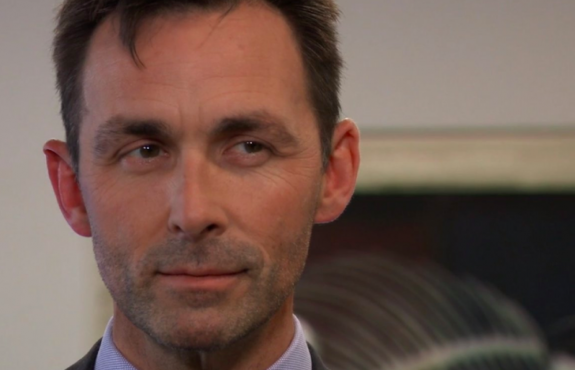 General Hospital (GH) spoilers for Tuesday, December 17, tease that Dustin Phillips (Mark Lawson) will leap into action. GH fans know Rocco Falconeri (O’Neill Monahan) accused Charlotte Cassadine (Scarlett Fernandez) of lying about her secret bodyguard, so she decided to prove she was right. Unfortunately, that means jumping into the water by the pier – which left Rocco standing there in horror.

GH Spoilers: Lulu Spencer Will Be In Panic Mode

Lulu Spencer (Emme Rylan) will obviously be in panic mode, but Dustin will try to keep a cool head. He’ll immediately ditch his jacket as he prepares to leap in. Dustin will urge Lulu to call 911 while he dives under the surface and hopefully pulls Charlotte out. It won’t be long until Valentin Cassadine (James Patrick Stuart) gets updates, but he’ll have some gloating to do first.

Previous General Hospital spoilers insisted Valentin would achieve victory at the auction. He indeed got that victory, but it came in a stunning way. When Valentin missed his chance to deliver a higher bid, Laura Webber’s (Genie Francis) final bid managed to win. The real shocker came moments later when the portrait suddenly caught on fire!

Valentin naturally assumes the codicil was destroyed, so he’ll be on cloud nine in Tuesday’s episode. He’ll contend that the portrait is gone along with its many secrets. However, Ava Jerome (Maura West) and Nina Reeves’ (Cynthia Watros) plan is far from over. They wouldn’t just get rid of the codicil like that, so some trickery has undoubtedly occurred.

Someone will get suspicious of Ava soon after Valentin’s public gloating. Maybe Jasper “Jax” Jacks (Ingo Rademacher) will accuse Ava of making sure that portrait burst into flames. Tuesday’s preview video shows Ava asking, “Now why would I do a thing like that?” Ava will smirk to confirm she’s still got a few tricks up her sleeve, so stay tuned.

As for Nikolas Cassadine (Marcus Coloma), he’ll get busted in the backroom. Trina Robinson (Sydney Mikayla) will discover Nik in the restricted area and immediately start grilling him. She’ll wonder who this guy is and what he’s doing back there. Nikolas will have to be smart about how he handles this confrontation!

Other General Hospital spoilers say Peter August (Wes Ramsey) will talk to Anna Devane (Finola Hughes). He’ll suggest that it “all depends on who Franco is when he wakes up.” Peter is certainly hoping Franco Baldwin (Roger Howarth) has returned to normal. The last thing he needs is him waking up as a “Drew Cain” with intensified Drew memories.

In Franco’s room, Elizabeth Baldwin (Rebecca Herbst) will try to figure out how much he recalls. Franco’s eyes just fluttered open, so it’s almost time for the moment of truth. Liz will ask Franco if he remembers her as he gazes over in a daze. Fortunately, it seems Franco will indeed remember Liz soon enough. It might take a little while for his brain to catch up, but the “Friz” family is on the verge of a happy reunion.