The Bold and the Beautiful Spoilers: Tuesday, December 17 – Liam & Steffy Get Zoe On Board – Thomas Changes His Scheme To Get Hope 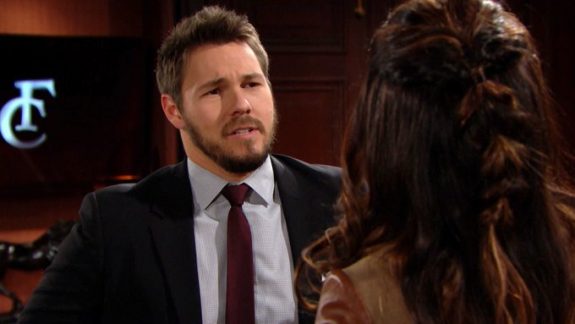 The Bold and the Beautiful spoilers for Tuesday, December 17, tease that Liam Spencer (Scott Clifton) will have to be very persuasive when it comes to floating his big idea to Steffy Forrester (Jacqueline MacInnes Wood) and Zoe Buckingham (Kiara Barnes). As B&B viewers know, Liam wants Steffy to rehire Zoe at Forrester Creations, and he wants Zoe to work undercover to find out the details on Thomas Forrester’s (Matthew Atkinson) intentions with Hope Logan (Annika Noelle).

Steffy is currently not on board with the idea, and it looks like Liam will have to make a pretty good case for his plan. He might have some difficulty getting Zoe on board as well, since working against Thomas probably sounds like a risky plan. Right now, Zoe is very apologetic, but Steffy is still angry about how Zoe kept the Beth Spencer (River Davidson and Madeline Valdez) secret to protect her father, Reese Buckingham (Wayne Brady).

Well, according to B&B spoilers, Steffy will ultimately rehire Zoe at Forrester Creations, but it won’t happen on the spot. However, it does appear that Liam and Steffy will be able to get Zoe on board to help them expose Thomas’ true motives. According to B&B spoilers, Zoe will be willing to do whatever it takes to get her job back, and so she’ll agree to help them get to the bottom of whatever Thomas might be up to.

Meanwhile, on Tuesday’s new episode of B&B, Thomas will have a change of plans in his scheme to get closer to Hope. As B&B viewers know, Thomas most recently came up with the idea for a fashion showdown to give Hope a reason to have to work with him on Hope For The Future. But his scheme didn’t work out as planned, since Hope rejected the idea of them working together on the line.

But that rejection won’t keep Thomas down. He’ll decide to change gears and do something totally unexpected. B&B spoilers indicate that Thomas will figure that Hope might reverse her decision and ultimately decide to work with him if she thinks that he’s no longer obsessed with her.

And so, Thomas will go to great lengths to make it looks like he’s now pursuing a romance with Zoe. According to ongoing B&B spoilers, Thomas will even stage a romantic dinner for two that he’ll make sure Hope sees. Hope will of course think that the dinner is meant for her, and when she protests, Thomas will let it be known that the setup is actually for another woman.

Thomas’ plan will be for Hope to think that he’s moved on with someone else, and that he’s no longer obsessed with her. He’ll be hoping that this might make Hope feel more comfortable about working with him on Hope For The Future. It will be yet another scheme, and it will apparently begin on Tuesday’s episode as Thomas approaches Zoe. Of course, whether he lets Zoe in on the plan, or whether he just leads her to believe that he’s genuinely interested in her remains to be seen.

Of course, Thomas won’t know that Zoe is actually in cahoots with Liam and Steffy, so there will be quite a bit of deception going on as Thomas woos Zoe and Zoe tries to get information on what Thomas is really up to.