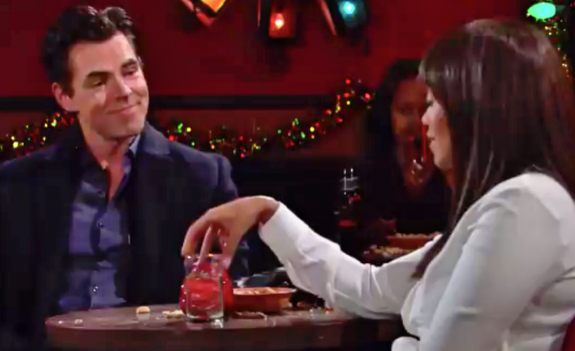 The Young and the Restless (Y&R) spoilers for Wednesday, December 18, tease that Theo Vanderway (Tyler Johnson) will pitch ideas to Summer Newman (Hunter King) and Jack Abbott (Peter Bergman). They’ll like his ideas, and Jack will say that he should focus on closing his big deal. Theo will say that the meeting is tomorrow, but Kyle Abbott (Michael Mealor) will arrive and say that the meeting was actually today, and that he missed it.

Theo will be horrified and won’t know how this happened. Kyle will say that he’ll take care of it, but Theo will insist on handling it and will get on the phone and fix the situation. Now alone with Kyle, Theo will accuse Kyle of setting him up, as he had the meeting date confirmed. Kyle will argue that he’d never sabotage him at Jabot’s expense.

Meanwhile, out in the lobby area, Summer and Jack will talk about Theo and Kyle’s difficult relationship. Jack will think that it’s a good opportunity for Theo to learn and will tell Summer to take a step back. Kyle will later tell Summer about Theo’s accusation, and she’ll tell him that they need to get out of there.

Next on Y&R, at the Grand Phoenix, Kyle will surmise that summer suspects that he switched Theo’s meeting to an earlier date. She’ll say that she’s going to stay neutral, and Kyle will guess that Jack advised her to take a step back. He’ll insist that he wants her thoughts, so she’ll share that she doesn’t think that he dealt with Theo constructively. She’ll remind Kyle that it’s his job to bring out the best in Theo, and that he should stay above Theo’s game.

Back at Jabot, Theo will tell Jack that he’s ready for his meeting. Jack will point out that they may be family, but that in this building he’s a marketing executive and will not get special treatment. Theo will assure Jack no more mistakes.

Next on Y&R, Billy Abbott (Jason Thompson) will tell himself to keep on smiling as Victoria Newman (Amelia Heinle) prepares for work. He’ll tell her at breakfast that he’s found a consulting position that may have him going to Chicago on occasion. He’ll suggest that they celebrate upstairs, but she’ll have to go to work.

Elsewhere in Crimson Lights, Billy will sit with Amanda. They’ll talk about Billy’s new consulting job before things turn to the nature of their relationship. Amanda will wonder if Billy is looking to have an affair, but he’ll deny it. Turns out, that’s not what either of them are looking for.

Next on Y&R, Victor will pay Victoria a visit at Newman Enterprises. Though their conversation she’ll realize that he misses his work, but Victor will assure her that he won’t try to come back. Victor will ask about how she and Billy are doing, and she’ll say that they couldn’t be happier together. Victor will note that Billy is now a “house husband” and he’ll let Victoria know how much he loves her.

Back at home, Billy will offer to take Victoria away to Chicago, but she’ll refuse. Billy will be disappointed, but he’ll cover by saying that he was just kidding. He’ll then text Amanda the definition of “friend.” She’ll text him back, thanking him for the vocabulary lesson as he smiles.

The Young and the Restless Spoilers: Elena Makes A Decision About Amanda https://t.co/kuMRmVjW1C pic.twitter.com/ITp3cS9zmk

Young And The Restless Spoilers: Elena Dawson Finds The Dossier

At Devon Hamilton’s (Bryton James) penthouse, he’ll prepare to leave for a meeting, but before he goes, he’ll warn Elena Dawson (Brynti Sarpy) to keep her distance from Amanda Sinclair (Mishael Morgan) for the time being. After Devon leaves, she’ll find the dossier on Amanda that Victor Newman (Eric Braeden) provided.

Meanwhile, Devon will see Amanda at the Grand Phoenix and they’ll argue over familiar territory. He’ll wonder whether he should bring a lawsuit against her and whether her potential clients would be upset by her connection to the will scam. She’ll ask if he’s threatening her, and Devon will say that he plans to get answers. Amanda will insist that she’s not liable for what happened, since he decided to give his money away.

Later, at Crimson Lights, Elena will talk with Nate Hastings (Sean Dominic) and she’ll say that she’s concerned that he may have been wrong about Amanda this whole time. Nate will be express his own concern that she’s becoming obsessed. He’ll wonder where all of this is coming from, and he’ll even say that perhaps Devon is looking for an excuse not to let it go. Elena will say that Amanda has secrets and could be dangerous.

Finally, on Wednesday’s new episode of Y&R, Devon will return home and notice that the dossier has been moved. He’ll quickly leave.