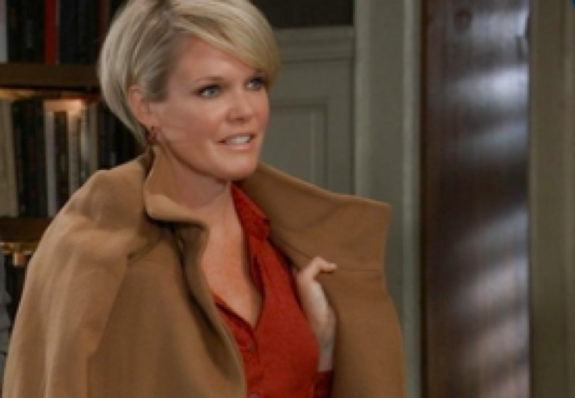 General Hospital (GH) spoilers for Wednesday, December 18, tease that Kevin Collins (Jon Lindstrom) will offer some guidance. GH fans know Charlotte Cassadine (Scarlett Fernandez) is adamant that her secret bodyguard is real. She even showed Laura Webber (Genie Francis) the pic of Nikolas Cassadine (Marcus Coloma) on her mom’s phone and insisted that was the bodyguard in question.

Laura should remain doubtful and will probably think it’s more proof that Charlotte concocted the story. She’ll get some advice from Kevin, who’ll share his thoughts with Lulu Spencer (Emme Rylan) as well. Curtis Ashford (Donnell Turner) will be on hand during this meeting, so he could learn some facts that’ll be important later.

As for Lulu, she’ll insist she has to speak with Valentin Cassadine (James Patrick Stuart) NOW. Laura and Lulu might consider the idea that someone really is lurking around Charlotte. They may not think it’s presumed dead Nik, but they could wonder if it’s a guy who looks like him. Lulu and Laura might decide any other explanation’s more plausible than the truth!

Speaking of the truth, that’s exactly what Nina Reeves (Cynthia Watros) will want from Liesl Obrecht (Kathleen Gati). Once Liesl confirms Nina’s ready to hear it, she’ll most likely confirm Valentin’s role in the fake daughter scheme. Liesl may choose to spill everything she knows and hope Nina will forgive her silence.

Of course, Nina already felt certain that Valentin was heavily involved in all this, but hearing the details could cement her decision to destroy him. As for Sasha Gilmore (Sofia Mattsson), she’ll deal with some work drama thanks to Lucy Coe (Lynn Herring). Lucy will set up a Face of Deception meeting that leaves Sasha flustered, so they could end up clashing about that on Wednesday.

Other General Hospital spoilers say Sonny Corinthos (Maurice Benard) will open up to Jason Morgan (Steve Burton). After another argument with Carly Corinthos (Laura Wright), Sonny will be even more worried about his wife. He’ll tell Jason his troubles and wonder what’s really going on.

Sonny doesn’t like all the secrecy – and Carly doesn’t either. That’s why she’ll push Jasper “Jax” Jacks (Ingo Rademacher) to rat Nik out on Wednesday. Carly will contend that Jax needs to call the cops and turn Nikolas in, but that’s something he won’t be willing to do.

At the gallery, Ava Jerome (Maura West) will hold a gun on Nik and grow increasingly agitated. She’ll want to know where Nikolas has been and why he nearly drove her off the deep end. Ava betrayed Nikolas by recanting her statement against Valentin, but he was a full-blown monster to her at Shadybrook. She’ll definitely have a huge problem with the way Nik exploited Kiki Jerome’s (Hayley Erin) memory.