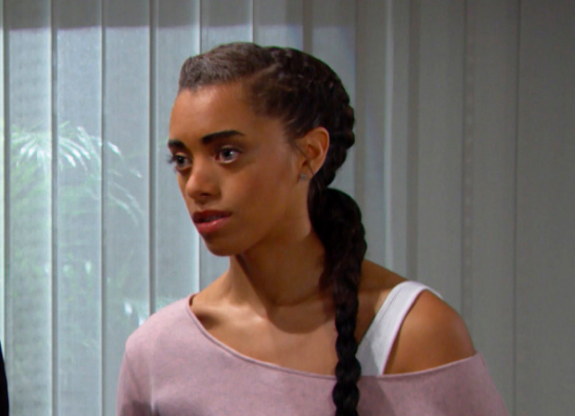 The Bold and the Beautiful spoilers for Wednesday, December 18. tease that Hope Logan (Annika Noelle) will be stunned by what she’s just seen. As B&B viewers know, she just walked into the Forrester design office and saw a romantic setup, with the lights down low and candles everywhere. She mistakenly assumed that the setup was designed by Thomas Forrester (Matthew Atkinson) for her, and she let Thomas have it.

But soon, Zoe Buckingham (Kiara Barnes) walked in the office and Hope realized that the romantic setup was actually set up by Thomas for Zoe. Now Hope is in utter disbelief, and on Wednesday’s B&B episode, Hope will get to witness Thomas profess his affection for Zoe some more.

According to B&B spoilers, Thomas will tell Zoe the he wants to move forward in a relationship with her, and the two will then share a passionate kiss. We’ll see whether Hope is present for that exchange, but given that Thomas is determined to demonstrate for Hope that he’s moved on from her, she just might see the whole thing.

Of course, all of this is part of a manipulative plan on Thomas’ part. He wants to convince Hope that he’s no longer interested in her, so that she’ll end up wanting what she can’t have. It’s all a big plot to get Hope to want to work with Thomas on her Hope for the Future line for the fashion showdown, which of course was Thomas’ idea.

At any rate, the whole situation is going to put Zoe in an awkward position. As B&B viewers know, Zoe really seems to like Thomas, and she’d like to be in a relationship with him. But Thomas doesn’t really want Zoe – she’s just part of his scheme to make Hope decide to bring him on board as her designer.

Still, Zoe will probably believe that Thomas’ desire for her is real, and that could put Liam Spencer’s (Scott Clifton) own devious plot into peril. As B&B viewers know, Liam has a big plan. He wants Steffy Forrester (Jacqueline MacInnes Wood) to rehire Zoe at Forrester Creations, and he wants Zoe to spy on Thomas for them.

Zoe is on board with the plan, but she’s also made it crystal clear that she’s hoping that Thomas is no longer obsessed with Hope and that her efforts to find dirt on Thomas don’t turn anything up. And now that Zoe is going to become romantically involved with Thomas, that’s going to complicate things greatly.

Specifically, Thomas probably won’t open up to Zoe about his true feelings for Hope given that he’s going to be romantically wooing her. He’ll want Zoe to think that their relationship is real, so one wonders if Zoe will ever be able to get any dirt on Thomas for Liam and Steffy.

Even so, Liam will keep pressuring Steffy to rehire Zoe and make his plan complete. As B&B viewers know, Steffy hasn’t been keen on the idea of rehiring Zoe at Forrester Creations, but on Wednesday’s B&B episode, she’ll do just that. It appears that Zoe will again apologize to Steffy about her part in the Beth Spencer (River Davidson and Madeline Valdez) ordeal, and Steffy will make the decision to rehire her.

This will be a major decision for Steffy, and ongoing B&B spoilers say that she’ll eventually face some pushback for the decision, since Zoe was previously fired from Forrester Creations for a good reason. Still, by the end of Wednesday’s episode, Zoe will have her job back, and Liam’s plan will be set in motion.