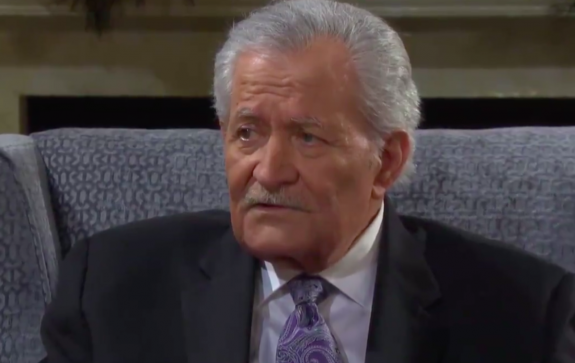 Days of Our Lives (DOOL) spoilers for Thursday, December 19, tease that Ciara Brady’s (Victoria Konefal) secret visits to see Ben Weston (Robert Scott Wilson) won’t be so secret anymore. Victor Kiriakis’ (John Aniston) suspicions will be raised, which probably means Xander Kiriakis (Paul Telfer) will tip him off. Xander may mention Ciara’s shady behavior and warn Victor that his granddaughter’s up to no good.

DOOL Spoilers: Victor Kiriakis Will Do A Little Digging Into Ciara Brady

Victor will do a little digging and find out that Ciara isn’t as done with Ben as she claims. Days of Our Lives spoilers say Vic will confront Ciara about staying in touch with her incarcerated ex – at least the man she claims is her ex. Victor will naturally assume that’s not the case, and DOOL fans know he’ll be right. Ciara is very much still in love with Ben and has been fighting tirelessly to clear his name.

Days of Our Lives spoilers say Ciara will be on the hot seat, so she’ll have to think fast and come up with another explanation. She’s come too far to blow this now! Ciara has to stick to the plan and uncover the evidence she needs to get Ben off the hook.

Other Days spoilers say Sonny Kiriakis (Freddie Smith) will get some support from Evan Frears (Brock Kelly. Since Will Horton (Chandler Massey) recently pushed for a divorce, Sonny will be pretty glum on Thursday. He can’t find a way forward with Will, but it’s still tough to think of ending his marriage.

Days Of Our Lives Spoilers: Evan Frears Will Do His Best To Lift Sonny Kiriakis’ Spirits

However, Evan will do his best to lift Sonny’s spirits – or at least assure him he’s not alone. Days of Our Lives spoilers say Sonny and Evan will share some close moments as their bond grows. It sounds like Sonny’s on the verge of a new beginning, but everything could change due to a major twist that’s likely brewing down the road.

In the meantime, Days of Our Lives spoilers say Kate Roberts (Lauren Koslow) will encounter Kayla Brady (Mary Beth Evans). As you might expect, their interaction will be pretty prickly. Kate has a knack for pushing the buttons of people she doesn’t like – and she certainly doesn’t like Kayla.

This will only intensify the rivalry between Kayla and Kate, which should set up what’s to come. Since Kate is hiding the truth about “Steve Johnson” aka Stefano DiMera (Stephen Nichols), that’s bound to infuriate Kayla eventually. As for what else is happening on Thursday, Days of Our Lives spoilers say “Hope Brady” aka Princess Gina Von Amberg will be in a real jam. She’ll face questions from Rafe Hernandez (Galen Gering), who just showed up at the secret lair.

After Stefano makes his getaway, “Hope” will get caught with a gun in her hands. She’ll claim she was following the same tip Rafe got, and he’ll buy that story. Rafe will also take a look around and see signs of Stefano everywhere.

Next, Abe Carver (James Reynolds) will appear and get updates on the situation. He’ll thank Rafe and “Hope” for filling him in before he takes off. That’ll give Rafe another chance to snoop and will lead to him discovering Princess Gina’s tiara. Of course, “Hope” can’t admit it’s hers, so she’ll try to get Rafe believing that it’s for Stefano’s Queen of the Night, Marlena Evans (Deidre Hall).

It sounds like another great episode’s coming up. We’ll keep you posted as other Days news and rumors emerge. Stick with DOOL and don’t forget to check back often for the latest Days of Our Lives spoilers, rumors, updates and news.