General Hospital Rumor: Is Harmony Really Reformed? Will She Try To Kidnap Wiley? 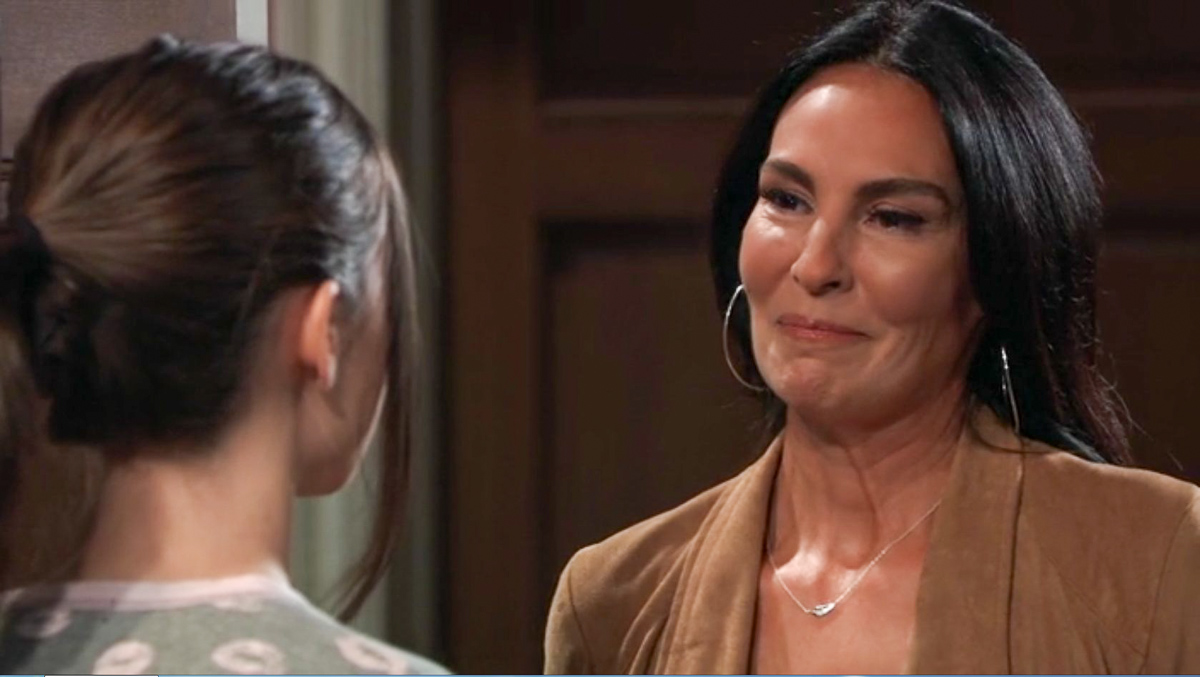 General Hospital spoilers tease that Lorraine “Harmony” Miller (Inga Cadranel) may not be as reformed as she claims she is – she showed an awful lot of interest in her “grandson” Wiley Cooper-Jones (Erik and Theodore Olson) in a recent General Hospital episode. Might she try to kidnap Wiley?

General Hospital viewers will recall that when Harmony talked to her daughter, Willow Tait (Katelyn MacMullen) in a recent episode of GH, they discussed her taking back her Dawn of Day name, “Harmony” instead of going by her real name of Lorraine. Harmony told Willow that she wants to be her true self, and that’s why she went back to “Harmony” instead of Lorraine, and that included being the mother that Willow deserves if she will let her.

Then she wanted to meet her grandson, and Willow had to remind her that Wiley was adopted, and she did not want to do anything to disrespect Wiley’s adoptive parents, Dr. Lucas Jones (Ryan Carnes) and Brad Cooper’s (Parry Shen) boundaries, considering they were kind enough to let her be in his life. Of course, Willow does not yet know Wiley’s true identity of Jonah Corinthos, and that Willow’s real son died.

Even though she denies it, perceptive General Hospital viewers see significance in the taking back of the name “Harmony”. This was the name that she took on as one of Shiloh Archer’s (Coby Ryan McLaughlin) inner circle, in fact she was his first initiate into the trust. General Hospital viewers will recall that initiation into the trust, which was the inner circle of women that Shiloh had who he slept with, was considered a high honor.

Shiloh’s women for the most part worshipped and obeyed him, until Willow, who fled the cult when she found herself pregnant with his baby. If Harmony has returned to her Dawn of Day brainwashing, she may want to reclaim “his son”, meaning Wiley, to carry on Shiloh’s name now that he is dead, and eventually his “ministry” and legacy when he grows up – regardless of what her daughter says!

General Hospital Spoilers – If Harmony Miller Wants To Revive The Cult, She Will Need Funds

As General Hospital viewers will recall, all of Shiloh’s funds and all of his offshore accounts which Harmony managed were either seized or spent when he was arrested, which is why he wanted to reclaim the money that he received from kidnapping and selling Drew Cain (Billy Miller) out of Afghanistan to Helena Cassadine (Constance Towers) years ago.

Drew found the money, which was in the car that he had bought and given Oscar Nero Quartermaine (Garren Lake Stitt) and he retrieved it, intercepting it before Cameron Webber (William Lipton) sold it to someone, and it was this bag of money that he had with him when his plane was sabotaged at the orders of Peter August (Wes Ramsey) and went down in the Gulf of Aden. What is unsure is if the money was retrieved, since it was never found with the plane wreckage, as well as any bodies, including Drew’s. Could it be possible that the pilots Peter hired were Dawnies, and they have the money waiting for Shiloh’s “widow” to reclaim?

The only problem is which “widow”? Harmony or Nelle Benson (Chloe Lanier)? Shiloh may have stipulated that Oscar’s ELQ shares would go to Nelle, but that ship sailed when Shiloh was out of the loop and didn’t know Oscar changed his will for them to go to fund The Kilimanjaro Foundation, which he founded to help young people be able to climb Mount Kilimanjaro. Shiloh may have earmarked the dirty money to go to Harmony should something happen to him and should it ever be found and retrieved, since that was the whole reason Franco Baldwin (Roger Howarth) was force fed Drew’s memories to begin with!