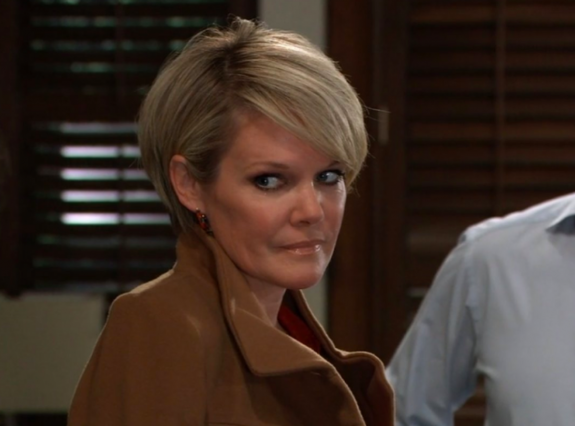 General Hospital (GH) spoilers for Thursday, December 19, tease that some hot drama’s coming up. We should point out that due to impeachment news coverage, the episode that was originally supposed to air Wednesday has been pushed back to Thursday. Now let’s get to all the action happening in Port Charles.

GH Spoilers: Ava Jerome Will Continue To Hold A Gun On Nikolas Cassadine

At the gallery, Ava Jerome (Maura West) will continue to hold a gun on Nikolas Cassadine (Marcus Coloma). She’ll have some harsh words about Nik’s decision to fake his death, but he’ll point out that she betrayed him by recanting her statement. Ava won’t think that matters much since Nikolas clearly wasn’t murdered. Besides, Nik lied and let his loved ones suffer.

As for the codicil that supposedly burned, Ava will suggest Nik should’ve thought about that before he chose to gaslight her. She’ll rant about Nikolas making him believe Kiki Jerome (Hayley Erin) was damned, so Nik will admit he’s not proud of it.

General Hospital Rumor: Could Claudette Be On Her Way Back; And Could She Also Be A Cassadine And Band With Nina And Ava?

Ava won’t particularly care if Nikolas is truly ashamed or not. She’ll ultimately reveal that the codicil is still in her possession, but there are terms to be met if Nik wants it. Over with Sonny Corinthos (Maurice Benard), she’ll open up to Jason Morgan (Steve Burton). Sonny will suggest Carly Corinthos (Laura Wright) is caught up in whatever trouble Jasper “Jax” Jacks (Ingo Rademacher) is in.

As for Carly, she’ll rant about having to keep Jax’s secrets for him. Carly will think it’s time for Jax to call the cops and turn Nikolas in. Jax will still believe a reversal of fortune is coming for Valentin Cassadine (James Patrick Stuart), but Carly won’t have much faith in a plan that hinges on Ava.

At the Metro Court, Lucy Coe (Lynn Herring) will get Michael Corinthos (Chad Duell) and Sasha Gilmore (Sofia Mattsson) to help her with a new investor. After Lucy insists Sasha is the new Face of Deception, Michael will talk her up before joining Sonny nearby. The investor will be impressed by “THE Sonny Corinthos” as well.

GH spoilers say the meeting will go well, so Sasha will agree to some negotiations. Once Michael advises Sonny about Mike Corbin (Max Gail), he’ll assist in Sasha’s deal. Michael will push for a 50-percent stake in Face of Deception, but he’ll eventually drop that number to 30 percent. Lucy will think Michael’s a shark for driving such a hard bargain, but she’ll be pleased to reach an agreement.

Back with Jason, he’ll find Carly after her conversation with Jax. They’ll discuss Carly’s secret, so she’ll admit she’s afraid Sonny will have Jax deported. Jason will want Carly to fill him in so he can fix this, but she won’t want him keeping secrets from Sonny, too. If everything isn’t out in the open by New Year’s, Carly will promise to spill.

Sonny will spot Jason and Carly whispering, so he’ll decide to take matters into his own hands. He’ll get on the phone with somebody he hopes can help him. Meanwhile, Lulu Spencer (Emme Rylan) will speak with Kevin Collins (Jon Lindstrom), Curtis Ashford (Donnell Turner) and Laura Webber (Genie Francis). She’ll ultimately determine she needs to go talk to Valentin about this custody case in person.

Once Lulu arrives at Wyndemere, they’ll have an ugly confrontation about how Charlotte’s being raised. Lulu will think Valentin’s trying to turn her into a spoiled brat, but he’ll think Lulu treats Charlotte like an extension of her ego. Since they won’t be able to resolve the conflict, they’ll see each other in court.

General Hospital Spoilers: Curtis Ashford Will Find Jax Jacks And Tell Him About The Custody Battle

Curtis will find Jax to tell him about the custody battle that’s brewing. He’ll think they need dirt Lulu can use against Valentin, so Jax will have a mission for Curtis. General Hospital spoilers say Jax will want Curtis to locate Claudette Beaulieu (Bree Williamson), who served as Charlotte’s surrogate.

Over with Nina Reeves (Cynthia Watros), she’ll manage to pry the truth out of Liesl Obrecht (Kathleen Gati). Liesl will note that she didn’t fake the DNA test herself, but she saw Valentin take the sample from dead Madeline Reeves (Donna Mills). Dr. O will suggest she thought Sasha was good for Nina. She’ll be apologetic as she offers a hair follicle Valentin used as part of his plot.

Afterward, Valentin will meet up with Nina and mention how Charlotte’s going to need her more than ever. General Hospital spoilers say Nina will look deep in thought. She’ll undoubtedly remain torn as her own scheme moves forward in the coming weeks. We’ll give you updates as other GH details emerge. Stick with the ABC soap and don’t forget to check back often for the latest General Hospital spoilers, rumors, updates and news.