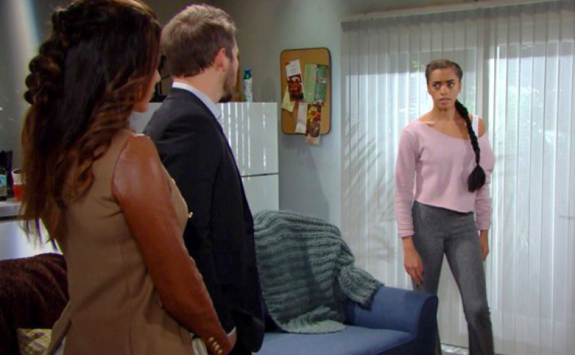 The Bold and the Beautiful spoilers for Thursday, December 19, tease that the action is really heating up on the CBS soap. But before we get to that, we have a quick programming note. Wednesday’s episode of B&B was preempted due to the televised impeachment debate in the US House of Representatives, so Wednesday’s episode is now scheduled to air on Thursday.

And we’ve got the scoop about what will happen on Thursday right here. First off, Hope Logan (Annika Noelle) will remain stunned by what she’s just witnessed. As B&B viewers know, she thought that the romantic setup in the Forrester design office was put together by Thomas Forrester (Matthew Atkinson) for her. But she was shocked when Zoe Buckingham (Kiara Barnes) stepped into the office, having been summoned there by Thomas for a romantic interlude.

‘The Bold and the Beautiful’ POLL: What Goals Will Thomas Achieve?

Now Hope is utterly speechless. She was sure that Thomas was still obsessed with her and had planned the romantic setup for her. But now she’ll have to acknowledge that Thomas has moved on and is pursuing a romantic relationship with Zoe. Of course, B&B viewers know that this is all a big ploy by Thomas and that he’s really playing hard to get with Hope.

Thomas’ ultimate goal here is for Hope to think that he’s moved on with Zoe, so that she’ll then feel comfortable in working with him as her designer on the Hope For The Future line. Thomas knows that Hope is desperate for a designer right now, and he thinks that the only way she’ll agree to work with him is if she believes he’s no longer obsessed with her.

B&B viewers can expect Thomas to really play up the scene for Hope. He’s already taken Zoe by the hand and professed that he’s moving on with her. It looks like Hope will get an eyeful as Thomas does even more to try to convince her that he’s really serious about moving on with Zoe. We’ll see if Hope buys it.

Meanwhile, on Thursday’s new episode of B&B, Steffy Forrester (Jacqueline MacInnes Wood) will come to a decision. As B&B viewers know, Liam Spencer (Scott Clifton) has been pressuring her to get on board with his big plan, which is to quietly find out what Thomas’ intentions are with Hope. He wants Steffy to rehire Zoe, so that Zoe can secretly spy on Thomas.

Well, Steffy hasn’t been too thrilled with the thought of rehiring Zoe, but on Thursday’s episode she’ll do exactly that. Exactly what finally convinces her to take the plunge remains to be seen, but B&B spoilers are clear that Zoe will get her job back at Forrester Creations.

Of course, now that Zoe will be rehired, she’ll also be officially on board to spy on Thomas. Yet she’ll also be in a new relationship with Thomas. It seems like a real mess, and it’s unclear exactly where Zoe’s loyalties will ultimately lie. Zoe has stated that she hopes Thomas isn’t still obsessed with Hope, and that she really likes him, so you never know with whom she’ll ultimately side. Be sure to tune in on Thursday to catch up on everything happening on B&B right now. Check Hollywood Hiccups often for updates, news, rumors, and spoilers!