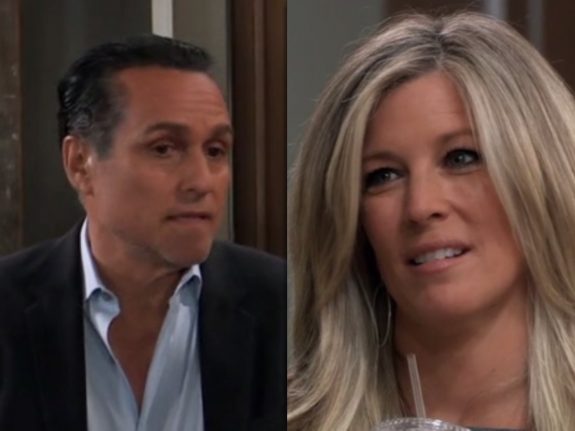 General Hospital’s Jason Morgan (Steve Burton) arrives Sonny Corinthos (Maurice Benard) asks him about the shipments. Sonny wants Jason to check things again to make sure everything is ok. Jason says he will check the routes again. Sonny wants to know what is going on with Carly.

Sonny asks if Carly has asked for Jason’s help. Sonny talks about fighting with Carly. Sonny says Jasper Jacks (Ingo Rademacher) is into something and Carly is protecting him. Jason asks if Sonny and Carly have fought about anything else. Sonny says they have been fighting over Mike Corbin (Max Gail). Sonny talks about the treatment that was suggested. Sonny wonders what Jason thinks about Mike’s situation. Jason tells Sonny to put himself in Mike’s place.

General Hospital Spoilers: Jason Morgan Will Do Anything For Jocelyn Jacks, Even Help Jax Jacks

General Hospital’s Carly meets Jax at the hospital. Carly thought this was supposed to be over tonight. Jax tells Carly about the painting burning. Jax says the codicil is gone or Ava Jerome (Maura West) has it. Carly wants Jax to call the cops. Jax says Valentin will be brought down soon. Carly demands answers. Jason asks what is going on. Jax tries to lie and Carly backs him up. Jax leaves and Carly says Jax is in trouble. Jason knows and wants to know what is going on.

Carly tells Jason that Jax is into something illegal and Sonny cannot find out. Carly is not going to tear her family apart. Sonny sees Carly and Jason talking and walks away. Carly refuses to tell Jason what is going on. Carly won’t tell Jason anything until New Year’s. Sonny makes a call, Carly is in trouble.

General Hospital’s Liesl Obrecht (Kathleen Gati) comes to check on Charlotte Cassidine (Scarlett Fernandez). Valentin Cassadine (James Patrick Stuart) and Nina Reeves (Cynthia Watros) assure Liesl that Charlotte is fine. Valentin goes to check on Charlotte. Nina tells Liesl she knows about her involvement in faking the DNA tests. Nina wants Liesl to tell her how she helped and why. Liesl asks Nina if the truth is more important than the family she always wanted. Liesl tells Nina she didn’t help but knows how Valentin faked the original test.

Liesl tells Nina what happened at the funeral. Nina cries and says Liesl knew all alone that Sasha Gilmore (Sofia Mattsson) was fake. Lulu Spencer (Emme Rylan) arrives and wants to speak to Valentin. Lulu says they have to do better for Charlotte. Lulu tells Valentin that Charlotte doesn’t trust them to keep her safe. Liesl tells Nina she was happy with Sasha as her daughter. Liesl offers a way to make amends. Liesl gives Nina locks of her mother’s hair to run tests again. Lulu and Valentin argue over Charlotte. Valentin says they need to let the family court handle this. Lulu promises to prove Valentin doesn’t need to be near Charlotte. Valentin joins Liesl and Nina and hugs Nina. Valentin says Charlotte needs Nina more than ever. Nina needs to make a call before going upstairs.

General Hospital’s Lulu is talking to Kevin Collins (Jon Lindstrom) about Charlotte when Curtis Ashford (Donnell Turner) joins them. Lulu may need Curtis to dig up dirt on Valentin for a custody hearing. Kevin says this bodyguard is Charlotte’s cry for help. Lulu insists on going to speak to Valentin. Laura thanks Curtis for helping them. Laura tells Kevin the imaginary bodyguard is Nikolas Cassadine (Marcus Coloma).

Laura says Charlotte was surprised her bodyguard didn’t show up. Jax joins Curtis and asks what his plan is for moving forward. Kevin says Charlotte could think of Nik was a flawed prince. Charlotte could want her parents to stop hating each other and Nik could make that happen. Jax wants Curtis to find the woman who carried Charlotte.

GH Spoilers: Ava Jerome Admits To Having The Codicil

General Hospital’s Nikolas shows up at the gallery. Ava Jerome (Maura West) pulls a gun on Nik and tells him she knew he would show up. Ava wants an apology for starters. Nik goes on to explain what happened after he was shot. Ava wonders why she should believe anything Nik says. Ava says the prince turned out to be a liar and a user. Ava will decide how the fairytale ends. Ava gets to decide how this ends. Nik berates Ava for not helping Spencer Cassadine (Nicholas Bechtel).

Nik tells Ava where he was while he recuperated. Nik says Valentin never needed the papers he signed Nik talks about the codicil. Ava asks how long Nik has her watched. Nik was having his mother watched. Nik could have been handing everything to Valentin if he appeared. Ava says it’s too bad the codicil was destroyed. Ava tells Nik she has the codicil. Ava puts the gun down and tells Nik he can start by thanking her. Ava says she did this for Spencer. Nik wants the codicil now, Ava refuses.

General Hospital’s Lucy Coe (Lynn Herring) is talking to someone about Deception. Michael Corinthos (Chad Duell) and Sasha arrive and Lucy tells Sasha to go along with her. Lucy introduces Sasha as the face of deception. Lucy introduces Michael to her potential investor. Sonny arrives and Michael goes to speak to him. Sonny wants to know what Michael would do if he was in Mike’s place. Michael would have to weigh the options. Michael asks what Carly thinks.

Sonny says he and Carly are having problems right now. Michael says Carly will always have Sonny’s back. Lucy says deception is back. Sasha wants to stake in the company. Sasha wants Michael to be her agent. Lucy doesn’t want to give Sasha part of the company. Michael insists on thirty percent or no Sasha. Lucy agrees, Michael will have the papers drawn up.

As always, more detailed spoilers and a full collection of pictures for the week in question will appear here on Soap Opera Spy, when there could be more clues and hints over exactly what’s going on.