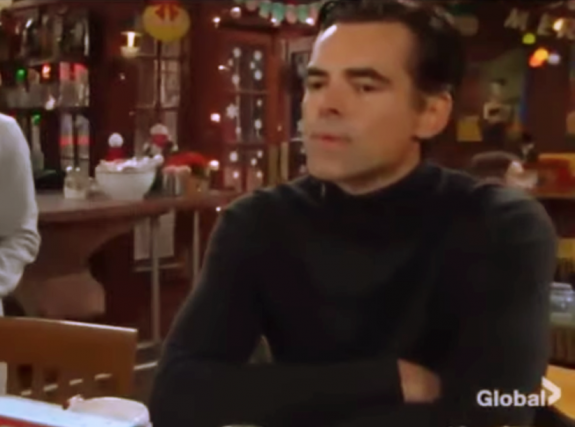 The Young and the Restless (Y&R) spoilers for Tuesday, December 24, tease that Kyle Abbott (Michael Mealor) and Lola Abbott (Sasha Calle) will decorate their tree at home. Kyle will bring up Theo Vaderway (Tyler Johnson), which they’ll decide not to talk about. They’ll discuss the holiday and Kyle will mention missing his mom before bringing up Theo again.

This will upset Lola, and as Kyle gets milk for their cookies, Lola will get a selfie of Theo along with some food from Society. She’ll smile and start to respond, then gaze at Kyle and put down her phone. Theo will be disappointed that she didn’t respond.

The Young and the Restless News: Brytni Sarpy And Bryton James Are Star-Crossed Lovers

Next on Y&R, at Society, Summer Newman (Hunter King) will approach Theo from behind as he’s sitting at the bar, and she’ll note that he was hoping it was Lola, but Theo will say he doesn’t know what she means. Summer will sit and Theo will start in on Kyles sabotage.

Summer will think that he shouldn’t obsesses over Kyle, and he’ll say that Summer still has a major thing for Kyle. Summer will protest, and through their conversation Summer will realize that Theo likes Lola.

Theo will say that he and Lola are just buddies, but Summer will call him out and say that he wants Lola, and that he’s never going to get her. She’ll advise that he focus on his work now and forget women for a while, and maybe reflect on what he really wants his future to look like. Devon Hamilton &Elena Dawson Plan A Trip

Next on Y&R, at Devon Hamilton’s (Bryton James) penthouse, Elena Dawson (Brytni Sarpy) will share her work schedule and time off with Devon, and Devon will announce that he wants to take her to London for the holidays – something that’s been on her bucket list. They’ll sit and talk about how much they mean to each other, then make travel plans. Elena will wonder whether he’ll be able to put Amanda Sinclair (Mishael Morgan) out of his mind.

During their conversation, it will come out that Billy hasn’t been seeing his therapist because she had a family emergency back home, and he doesn’t get along with her replacement therapist. Billy will assure Jack that he has been talking to someone, though, and Jack will embrace Billy and offer to lend an ear anytime he wants.

Next on Y&R, at the Grand Phoenix, Nick Newman (Joshua Morrow) will catch Phyllis Summers (Michelle Stafford) in the lobby wrapping gifts. They’ll share a few laughs before talking about holiday plans with Summer. Nick will wonder why she’s being so nice to him, and she’ll tell him that she has compassion and that it’s the holidays, prompting Nick to smile. They’ll continue to have a semi-flirty conversation.

Before he goes, Nick will suggest that they spend time together with Summer over the holidays. Phyllis will be up for it, and she and Nick will be carrying on happily when Chelsea Lawson (Melissa Claire Egan) walks in and spots them, annoyed. After Phyllis goes, Chelsea and Nick will say that they’re glad about their time together the other night. Nick will ask about Connor, and Chelsea will report that he’s doing well lately.

Nick will bring up spending time together at Christmas, and she’ll wonder if Adam Newman (Mark Grossman) will be on his guest list…after all, Phyllis is. Chelsea will say that Connor and Adam need to be together on Christmas, which Nick won’t like. Chelsea will press him to invite Adam, and Nick will agree so he can spend Christmas with Chelsea.

Meanwhile, at Crimson Lights, Phyllis will sit down next to Billy. They’ll talk about being expats of Jabot, and Billy will compliment Phyllis for being in control of her own life and destiny. She’ll say that she detects a note of envy. He’ll share that he got a consulting job, and she’ll think that he could do better than being a mere consultant, and he’ll get miffed. Phyllis will go on, and as they talk, they’ll almost talk about the incident with Summer, which will be a turn in the conversation.

Ultimately, she’ll tell him to “be Billy Abbott” and as he’s leaving, he’ll think to himself that he doesn’t know who the real Billy Abbott is anymore. On the patio at Crimson lights Paul Williams (Doug Davidson) will join Chance Chancellor (Donny Boaz). After some small talk, Chance will bring up private investigating. He’ll say that working uncover isn’t right for his anymore. Paul will note that PI work is slower than what he’s used to, which Chance will like the sound of.

Phyllis will then come up behind Chance and wonder what he was talking to Paul about. Chance will sigh. Phyllis will needle him about Vegas some more, and she’ll follow him, telling him that the more he shuts him out, the more she persists.

Finally, on Tuesday’s new episode of Y&R, at the dive bar, Billy will get asked to play some cards. He’ll initially say no, then agree to play one hand. He’ll throw some cash down on the

table and start playing. After one hand, he’ll bow out, telling himself that was easier than he thought. Be sure to tune in on Tuesday to catch up on everything happening on Y&R right now. CheckHollywood Hiccups often for updates, news, rumors, and spoilers!