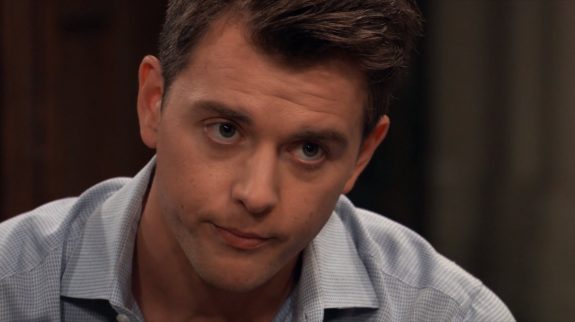 Julian and Liz discuss Franco’s time as Drew Cain (Billy Miller). Liz approaches Franco and tells him how much she missed him. Franco puts on his wedding ring and they start to leave. Jordan Ashford (Briana Nicole Henry) arrives and shows Franco a picture of the gunman. Franco doesn’t recognize the man and suggests Jordan ask Drew. Franco questions everyone’s reaction to the suggestion. Liz tells Franco they have a lot to discuss about Drew. Liz wants to talk to Franco at home and they leave.

Franco arrives home, Liz explains that Aiden Spencer (Jason David) has gone to visit his father. Franco wants to know about Drew. Liz explains that Drew is missing and presumed dead. Franco is sad to learn of Drew’s death. Liz tells Franco how hard it was to see him as Drew. Franco kisses Liz, she pulls back. Liz tells Franco that when he was Drew he slept with Kim Nero (Tamara Braun).

Michael tells Willow about A.J. Quartermaine’s (Sean Kanan) death and how he took Avery to hurt Sonny Corinthos (Maurice Benard). Michael says it took a while but he forgave Sonny. Michael talks about an investor that turned him down when he saw him playing with Avery. Willow would have invested in him.

Maxie talks to Anna about the life she is building with Peter. Anna hugs Maxie and tells her she’s happy for her. Maxie says Peter has moved past all his baggage. Maxie and Peter leave. Anna tells Finn she should take his advice about Peter. Finn goes to check on Violet Barnes (Jophielle Love).

Nelle gets word that she is being sent back to prison. Martin tried to block Nelle’s transfer. Brad visits Nelle and tells her this is all her fault. Martin introduces himself to Michael as Nelle’s attorney. Michael warns Martin about Nelle.

General Hospital’s Brad Cooper (Parry Shen) is talking to Lucas Jones (Ryan Carnes). Brad wonders if he should give Wiley back to Michael. Brad says they would have made a good team if Brad hadn’t chosen to lie to him. Julian joins Brad in Lucas’ room. The doctor says the swelling is down in Lucas’ brain but he is still in a coma. Lucas needs to remain in a medically induced coma. Lucas needs to be placed in an assisted living facility. Lucas is to be moved today. Brad is upset and leaves the room.

Julian talks to Lucas and tells him he will wake up. Amy talks to Brad and tells him how much everyone loves Lucas. Amy tells Brad that Nelle is a patient there. Jordan tells Julian the tests couldn’t determine what happened to the car. Michael gets a call from Amy who asks him to bring Wiley to visit Brad. Michael arrives at the hospital and asks where Brad is. Michael talks to Brad about Lucas before telling him Wiley is there. Nelle approaches Willow as she holds Wiley.