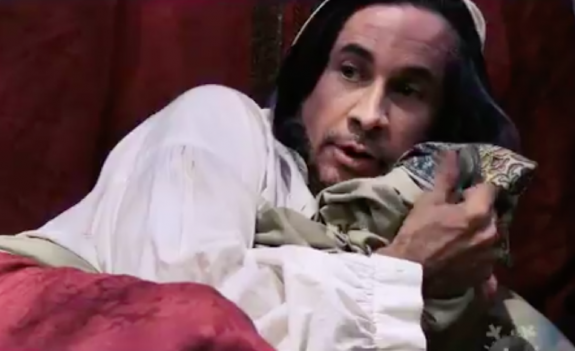 General Hospital (GH) spoilers for Monday, December 23, tease that an exciting episode is on the way. GH will get in the holiday spirit with a special Christmas episode centered on Hamilton Finn (Michael Easton). Before we get to that, let’s set the stage for Finn’s shocking dream.

GH Spoilers: Christmas Episode Will Be Centered On Hamilton Finn

For starters, Tracy Quartermaine (Jane Elliot) will return to Port Charles, so you can expect to catch your first glimpse of her on Monday. It’ll be wonderful to see Tracy back in PC – and hear whatever witty insults and comments she makes along the way! Monica Quartermaine (Leslie Charleson) has had her fair share of issues with Tracy over the years, but she’ll be happy to see her after all this time.

General Hospital Rumor: Harmony Needs A Job, Jax Needs An Accountant; A Back Door Into Funding A New Dawn Of Day?

Tracy’s been in Amsterdam, but she’ll claim she wanted to come home and spend the holidays with the Quartermaines. The truth will be a lot more complicated than that! General Hospital spoilers say the real reason for Tracy’s visit will be revealed later, but she’ll just enjoy catching up with everyone for now.

As for Monica, she’ll read A Christmas Carol by Charles Dickens at GH. All the children will gather around and listen intently to Monica’s tale. Violet Barnes (Jophielle Love) will be on hand to enjoy the story, but there’ll be some parenting struggles for Finn on Monday. Anna Devane (Finola Hughes) will do her best to help Finn, but he’ll still wonder if he has what it takes to be a good dad.

Over with Robert Scorpio (Tristan Rogers), he’ll slip a candy cane in Finn’s coat pocket and insist he’s a real Scrooge. Liesl Obrecht (Kathleen Gati) will also pipe up that Christmas is a time to put aside their differences and spread goodwill. All of his will set up Finn’s dream, which will involve his own version of A Christmas Carol. He’ll be Ebenezer Scrooge while Franco Baldwin (Roger Howarth) is apparently transformed into Bob Cratchit.

General Hospital Spoilers: Sonny Feels Betrayed! Carly Working Against Him Behind His Back! https://t.co/Al1zE2oGT9 pic.twitter.com/i7trzfQzxu

That means Elizabeth Baldwin (Rebecca Herbst) and her boys will become the rest of the Cratchit family – including Aiden Webber (Jason David) as Tiny Tim apparently. Liesl will be a spirit guide as Finn deals with a night of difficult lessons. He’ll learn the meaning of Christmas and get some help embracing the challenges of fatherhood.