The Bold and the Beautiful Spoilers: Monday, December 23 – Ridge Hopes For Another Chance With Brooke – Thomas Confident In His Ruse 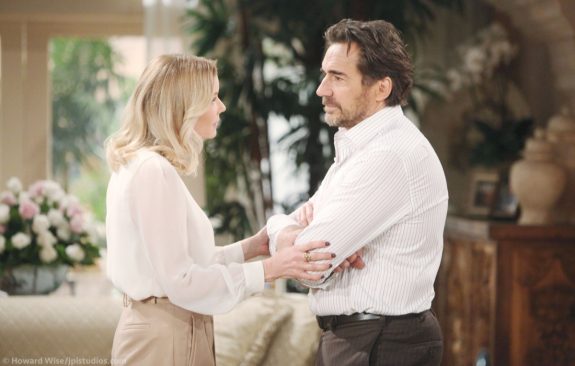 The Bold and the Beautiful spoilers for Monday, December 23, tease that Ridge Forrester (Thorsten Kaye) will have a proposition for Brooke Forrester (Katherine Kelly Lang). As B&B viewers know, they’re currently in the middle of a conversation at the Forrester mansion. Brooke arrived to see Ridge after she learned from Eric Forrester (John McCook) that Zoe Buckingham (Kiara Barnes) had been rehired at Forrester Creations, and she was livid.

But it looks like Ridge will have something else on his mind. Now that he knows that Thomas Forrester (Matthew Atkinson) has moved on with Zoe, it seems that he’ll think there could be renewed hope for his marriage with Brooke. It seems that Ridge will tell Brooke that there’s still hope for their union – perhaps he’ll even reveal that he hasn’t filed the divorce papers yet.

‘The Bold and the Beautiful’ Spoilers: Liam Determined To Stop Thomas – Hope Believes Problem Is Manageable

The Bold and the Beautiful spoilers say that Ridge will give Brooke another chance to save their marriage. He’ll probably explain that since Thomas has moved on with Zoe, then that means that Brooke can relax about Thomas obsessing over Hope Logan (Annika Noelle). After all, if Thomas is interested in new woman, then he can’t be obsessed over Hope, right?

Well, it’s seriously doubtful that Brooke will consider Thomas reformed just because he’s interested in Zoe for the time being. It looks like Brooke will once again refuse to give Thomas a break, and she’ll continue to insist that he’s “sick” and a danger to Hope. That doesn’t bode well for “Bridge’s” marriage.

Meanwhile, on Monday’s new episode of B&B, Thomas will press forward with his big plot to convince everyone that he’s moved on with Zoe. As B&B viewers know, Thomas needs to be in a relationship with Zoe so that Hope will continue to work with him on her line for the fashion showdown. He was successful in getting Hope to agree to work with him, and he wants it to continue.

Bold And The Beautiful Spoilers: Thomas Forrester Feels Confident In His Plan

Of course, what Thomas really wants is for Hope to eventually fall in love with him and turn her back on Liam Spencer (Scott Clifton), and in his warped mind, he actually believes that this is possible. According to B&B spoilers, Thomas will be feeling good about his plan on Monday’s episode. He really seems to think that he’s got a shot with Hope, and he’s currently oblivious to the fact that Zoe is working against him.

In fact, one wonders whether Thomas will eventually figure out that Zoe is working as a spy for Liam and Steffy Forrester (Jacqueline MacInnes Wood). Thomas is a pretty sharp guy, but he’s currently so focused on his own ruse with Zoe that he doesn’t realize there’s another ruse in place right under his nose. We’ll see if he ever figures out the plot in place against him.