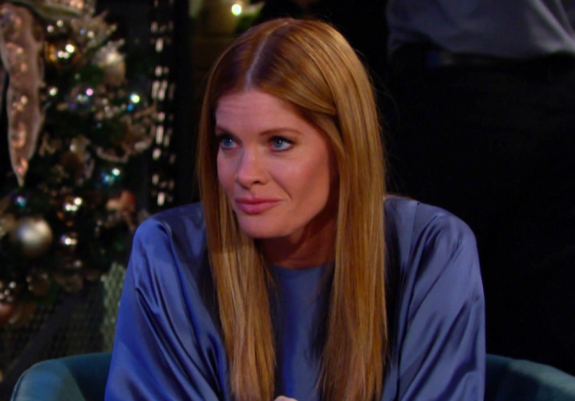 The Young and the Restless (Y&R) spoilers for Wednesday, December 25, tease that Rey Rosales (Jordi Vilasuso) and Sharon Newman (Sharon Case) will be hanging decorations when Faith Newman (Alyvia Alyn Lind) arrives with Mariah Copeland (Camryn Grimes). Summer Newman (Hunter King) will be on hand as well as everyone greets Faith and catches up.

Faith, Mariah, and Summer will head to the patio, where they’ll talk about the boy that Faith is currently into and they’ll happily get reacquainted. When Faith steps away, Mariah will wonder how things are going at Jabot, and Summer will take the opportunity to tell Mariah that she’s matured and moved on from Kyle Abbott (Michael Mealor).

Next on Y&R, Sharon and Rey will discuss Connor Newman (Judah Mackey), who will be on Sharon’s mind. Sharon will assure Rey that he doesn’t have to worry about Adam Newman (Mark Grossman) because she’s not about to put what they have in jeopardy. When Faith returns, Sharon will hug her again and think that she’s the luckiest mom in the world.

The Young And The Restless Spoilers: Kevin Is Given The Ultimate Christmas Gift From Chloe

Next on Y&R, Phyllis Summers (Michelle Stafford) and Amanda Sinclair (Mishael Morgan) will chat, and Amanda will apologize for how she handled Phyllis’ request for representation. Phyllis will be gracious and offer friendship. Later, Amanda will spend some time with Nate Hastings (Sean Dominic) and they’ll discuss their friendship and holiday plans. Nate will wonder if she’s met any men, and she won’t tell him about her friendship with Billy Abbott (Jason Thompson).

Meanwhile, at Society, Chance Chancellor (Donny Boaz) will talk with Adam. He’ll announce that he’s staying in Genoa City, even though he knows that he’s a reminder for Adam of things they’d both like to forget. They’ll discuss what went down in Vegas a bit, noting that it’s hard to forget. Phyllis will arrive and see the men talking, as they see her. After Adam leaves, Phyllis will offer to buy Chance a drink and will say that she wants to be friends.

Chance will deduce that Phyllis is just looking for something to use against Adam, and Phyllis will implore Chance to help her by telling her about what happened in Las Vegas. She’ll want Chance to fill in the blanks about the jam he was in, which she overheard him talking with Adam about earlier. Chance will tell her to go toy with someone else, as he knows her kinds and just isn’t interested.

Next on Y&R, Christine Williams (Lauralee Bell), Lauren Baldwin (Tracey E. Bregman), Michael Baldwin (Christian LeBlanc), and Paul Williams (Doug Davidson) will join together for a meal at Society. Michael and Paul will argue, first about their racquetball game, then about a case, before they get to their dinner and conversation. They’ll discuss Fenmore “Fen” Baldwin (Zach Tinker) and offer a toast to the fact that he’s doing well in recovery.

Finally, on Wednesday’s new episode of Y&R, back at Adam’s penthouse, he’ll call someone in Las Vegas and ask if “she” is still getting the payments, noting that silence is expensive but essential.