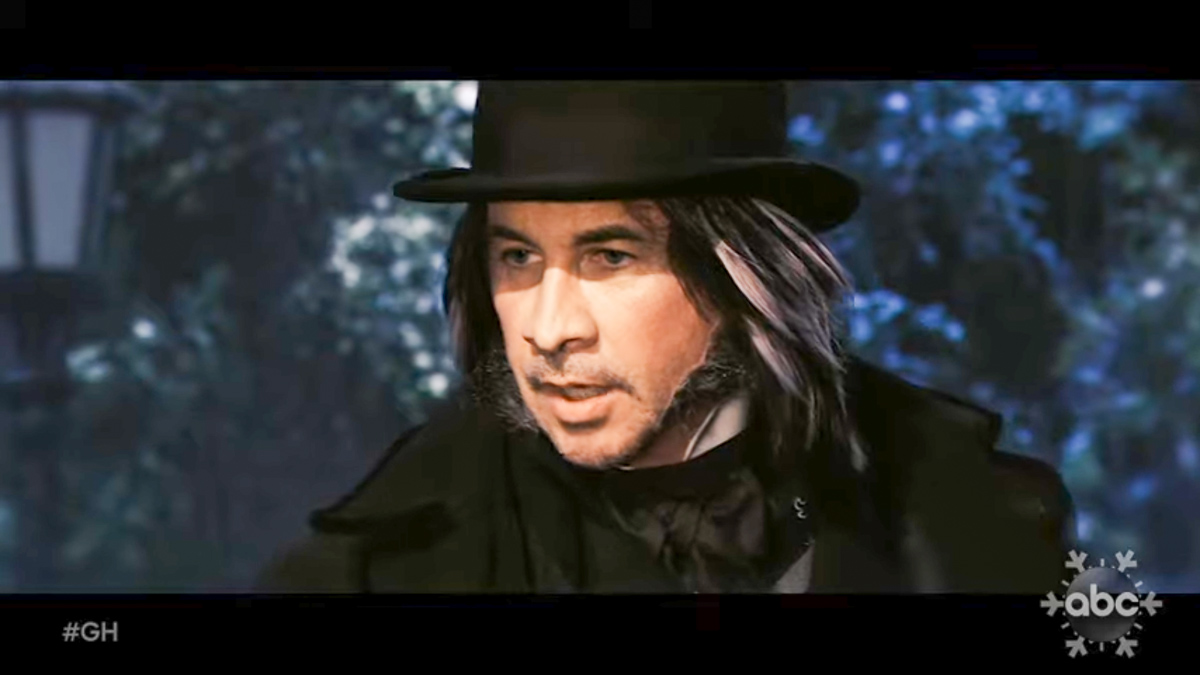 Of course, this is Christmas week in Port Charles, and there will be Christmas events. Monday starts off with Dr. Monica Quartermaine (Leslie Charleson) warming up Santa’s throne and reading “A Christmas Carol” by Charles Dickens to the children who are gathered waiting for Santa. Dr. Hamilton Finn (Michael Easton) makes a remark he worries that his daughter, Violet Barnes (Jophielle Love) may have heard and Anna Devane (Finola Hughes) gives him some advice about showing some Christmas spirit while Robert Scorpio (Tristan Rogers) calls him a Scrooge! He will have a nightmare in which he IS Ebenezer Scrooge! Once Santa arrives, Danny Morgan (Porter Fasullo) will visit him and Monica will be happy.

Tracy Quartermaine, (Jane Elliot) returns for the holidays this week, after being away from Port Charles for two years. The last time General Hospital viewers saw Tracy, she ran into Luke Spencer (Anthony Geary) in Amsterdam, where Tony Geary actually lives now since he retired. Whether Tracy will bring news of Luke is uncertain, but she too will be at the General Hospital Christmas party where family and friends who haven’t seen her in a long time will welcome her back with open arms. Tracy and her granddaughter Brook Lynn Ashton (Amanda Setton), said to be very much alike should provide some drama with their interactions!

Nelle Benson (Chloe Lanier) remains out of Pentonville Prison and in General Hospital as of Friday’s episode, where she unexpectedly encountered Willow Tait (Katelyn MacMullen) holding Wiley Cooper-Jones (Erik and Theodore Olson) who of course is really her son with Michael Corinthos, (Chad Duell) who had brought the tot to General Hospital to cheer Brad Cooper (Parry Shen) up. Nelle will play it cool although she will be insistent later in the week. Julian Jerome (William DeVry) will lose his temper, and this could have something to do with Nelle encountering Wiley. Willow doesn’t know what Nelle looks like but Julian does!

Anna and Finn will have a difference of opinion as she continues to puzzle over the Peter August (Wes Ramsey) puzzle, having found that he and the gunman who tried to kill Dr. Andre Maddox (Anthony Montgomery) and Franco Baldwin (Roger Howarth) worked at the same DVX shell company at the same time. Connected to this situation, Franco continues to deal with grief over what happened to Drew Cain, (Billy Miller) also because of Peter and his poor judgment, and Elizabeth Baldwin (Rebecca Herbst) will be understanding, while Maxie Jones (Kirsten Storms) will help Peter.

Sonny and Carly Corinthos (Maurice Benard, Laura Wright) will continue to bicker although he will console her this week, possibly over the situation with her adoptive brother, Lucas Jones (Ryan Carnes) still remaining in a coma and being put in Turning Woods, the same facility where Sonny’s father, Mike Corbin (Max Gail) is at for his Alzheimer’s. Josslyn Jacks (Eden McCoy) will be confused and the Corinthos family will now have two family members to visit at Turning Woods!

That’s all for this week’s Five Key Takeaways from General Hospital. Stay tuned to the show, and keep checking General Hospital spoilers frequently for all the latest news, updates, and developments!