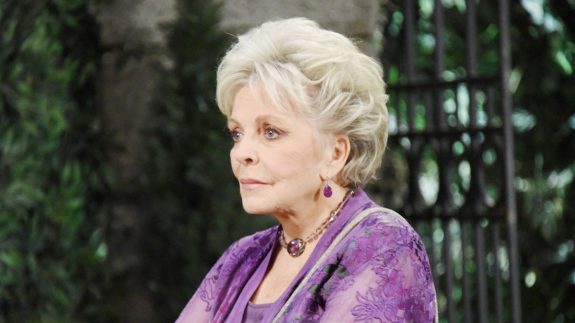 Days of Our Lives (DOOL) spoilers for Tuesday, December 24, tease that Julie Williams (Susan Seaforth Hayes) will fear the worst. As the minutes turn to hours, Julie will remain guest-less at the Horton tree-trimming party. She’ll start to worry that no one’s going to show up, which would certainly make for a pretty disappointing holiday.

Fortunately, everyone will make it over to the Horton house sooner or later. Days of Our Lives spoilers say Julie will be ecstatic when she opens the door and welcomes in the whole gang. It won’t be long until hearts are full and all the ornaments are on the tree.

Days Of Our Lives Spoilers: Soap Vet Judi Evan’s Suffers Tragic Passing of Her Only Child

DOOL Spoilers: Hattie Adams And Eve Donovan Will Get The Christmas Present They’ve Been Waiting For

Over with Hattie Adams (Deidre Hall) and Eve Donovan (Kassie DePaiva), they’ll get the Christmas present they’ve both been waiting for. Hattie has been counting down the days to her release, and Eve’s been counting on Abigail DiMera (Kate Mansi) to prove her innocence. The security footage didn’t reveal the true culprit, but at least Eve’s name was cleared. She’ll be a free woman along with Hattie this Tuesday, so they’ll have to figure out their next move.

Days of Our Lives spoilers say Hattie will stay in Salem to stir up trouble, but Eve will decide to move on. She’ll think it’s best if she leaves town and starts fresh somewhere else. However, Eve will want to thank Abigail before she goes. She’ll stop by the Horton gathering and express her deep gratitude over Abby’s search for the truth.

Of course, DOOL fans know Abigail hasn’t found the truth just yet! The security footage was doctored again, but at least Eve won’t be stuck behind bars for a crime she didn’t commit. As for Princess Gina Von Amberg aka Hope Brady (Kristian Alfonso), she’ll have to remain on high alert. The clues should begin adding up for Rafe Hernandez (Galen Gering) eventually.

Days Of Our Lives Spoilers: Xander Kiriakis Cooks Up A Surprise

In the meantime, let’s talk about Xander Kiriakis (Paul Telfer) and a surprise he’s cooked up for Sarah Horton (Linsey Godfrey). Will it be something Xander sends to Boston or could this be a glimpse of the Christmas we missed? At some point, Days will give us fake flashbacks of what happened during last year’s holiday season, which was skipped due to the time jump. That means Xander’s surprise for Sarah could be in his memories.

Whatever the case, it looks like a fun holiday episode’s in store on this Christmas Eve. We’ll give you updates as other Days news and rumors emerge. Stick with DOOL and don’t forget to check back often for the latest Days of Our Lives spoilers, rumors, updates and news.