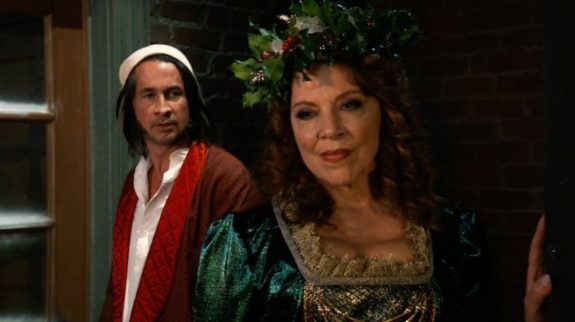 General Hospital (GH) recap Monday, December 23, 2019, reveals Monica Quartermaine (Leslie Charleston) reads the Christmas story. All the children are gathered around her as she reads the story.

Tracy approaches Finn and hugs him. Curtis Ashford (Donnell Turner) arrives and tells everyone the roads are closed. Ned Quartermaine (Wally Kurth) and Tracy watch as Monica continues. Monica finishes the story and everyone claps. Curtis tells them the roads have been cleared. Brook Lynn Ashton (Amanda Setton) thinks Tracy wants to leave, she decides to help out. Finn asks Anna to go by Felicia’s party after all. Violet says that was the best story ever.

General Hospital Spoilers: The Ghost Of Christmas Past

General Hospital’s Finn imagines himself as Scrooge. Scrooge is asked to donate to the poor, he declines. Scrooge’s nephew (Wes Ramsey) arrives and Scrooge sends him away refusing his dinner invitation. Scrooge’s assistant, Bob Cratchet, (Roger Howarth) leaves for home. Scrooge gives him the day off but tells him to be early the day after Christmas. Scrooge’s employee (Donnell Turner) asks for donations for the poor, Scrooge refuses. Scrooge is visited by his old partner Marly (Jane Elliot) who tells him he has a chance to change things. Scrooge is warned of the three spirits.

The ghost of Christmas past (Eden Mccoy) takes Scrooge back to the past. Scrooge’s girlfriend, Belle (Katelyn MacMullen) wants to dance, Scrooge refuses. Scrooge’s coworker (Chad Duell) invites her to dance, she agrees. Scrooge goes back to work despite his boss’ warning. Scrooge’s girlfriend breaks up with him. An older Belle (Finola Hughes) is with a character played by Tristan Rogers.

General Hospital’s Finn, as Scrooge, gets a visit from the Ghost of Christmas Present (Kathleen Gati). Scrooge has learned a lesson that is working. Scrooge wants to learn from this lesson. Scrooge watches the party at his nephew’s house. Finn’s nephew’s wife (Kristen Storms) guesses that he is playing Scrooge. The employee is married to a woman played by Briana Nicole Henry. Scrooge then visits Bob’s house and watching them rejoice. Scrooge wants to know if Bob’s son dies. The spirit tells him something must change if he is to be saved.

General Hospital Spoilers: The Ghost Of Christmas Yet To Come

General Hospital’s Finn, as Scrooge, gets his third visitor. The Ghost of Christmas Yet to come (Maura West), arrives. Scrooge visits his grave after his funeral. Scrooge’s nephew says good riddance to him. The housekeeper (Leslie Charleston) gives Scrooge’s possessions to the poor. Bob comes home from visiting his son’s grave as well. Bob’s family is in debt to Scrooge.

Scrooge asks if this can be changed. Scrooge sees that this is his grave his nephew was standing by. Scrooge begs for a chance to change his life. Scrooge kisses his housekeeper who informs him it is Christmas Day. Scrooge visits everyone who he had turned down earlier. Scrooge arrives at Bob’s home and double’s his salary after giving him a turkey. Scrooge is invited to join them for dinner.