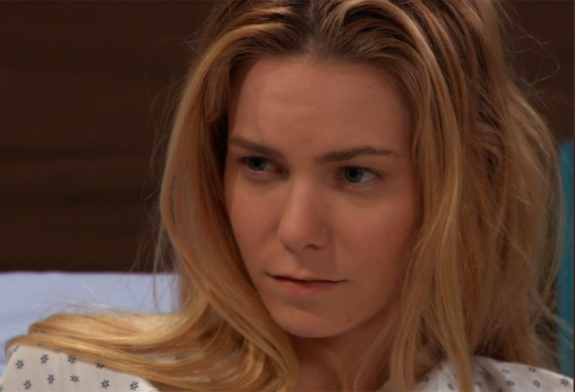 General Hospital (GH) spoilers for Thursday, December 26, tease that some tricky situations are on the way. We should point out that Christmas Eve and Christmas Day will bring encore episodes of GH. General Hospital will be back with a brand-new one on Thursday. Now let’s get to all the drama.

GH Spoilers: Anna Devane Will Have A Big Decision To Make

For starters, Anna Devane (Finola Hughes) will have a big decision to make. GH fans know Anna recently discovered a link between Peter August (Wes Ramsey) and the gunman he killed. They both worked at EuroTech, a company that served as a DVX front, at the same time.

When Hamilton Finn (Michael Easton) gets updates, he’ll ask what Anna’s going to do now that she knows. It’ll lead to difference of opinion, but Finn will be adamant that someone else could get hurt if Anna doesn’t pipe up. As for Peter, he’ll be on edge after Maxie Jones’ (Kirsten Storms) warning. Maxie will point out that Jason Morgan (Steve Burton) isn’t going to rest until he knows who this bad guy is.

Peter will grow increasingly concerned about the threat Jason poses, which could mean danger for Jason eventually! GH fans know there’s no line Peter won’t cross when it comes to covering his tracks. As for Finn, he’ll tackle a Daddy crisis. Violet Barnes (Jophielle Love) will wonder if Mommy’s going to be back in time for Christmas, so Finn will face a difficult task. He’ll do his best to explain that Mommy loves Violet and must’ve had a good reason for leaving.

Meanwhile, Julian Jerome (William deVry) will open up to Brook Lynn Ashton (Amanda Setton). They’ll talk about Leo before Brook Lynn offers to show him some pictures. She’ll have photos of when Julian was kept out of Leo’s life, so he’s grateful for this Christmas present.

Over with Nelle Benson (Chloe Lanier), she’ll ask Willow Tait (Katelyn MacMullen) if she can hold “Wiley Cooper-Jones” (Erik and Theo Olson). Willow will look a bit uneasy despite not knowing who Nelle is. She’ll nearly let Nelle hold “Wiley,” but Michael Corinthos (Chad Duell) will rush over and put a stop to it. Nelle will needle Michael about how their son would’ve loved Christmas, but he’ll be eager to get away from his manipulative ex.

At the Quartermaine manson, Tracy Quartermaine (Jane Elliot) will show up and express dismay over the redecorating. Across town, Franco Baldwin (Roger Howarth) will be apologetic over sleeping with Kim Nero (Tamara Braun). He’ll be horrified by what he did when he wasn’t in his right mind, but Elizabeth Baldwin (Rebecca Herbst) will offer reassurance.

It won’t be long until Cameron Webber (William Lipton) and Jake Webber (Hudson West) are back to welcome Franco home for the holidays. It’ll be a wonderful “Friz” family Christmas this year! At Turning Woods, Gladys Corbin (Bonnie Borroughs) will be there to take Mike Corbin (Max Gail) on an outing. She’ll leave Sonny Corinthos (Maurice Benard) miffed by their plans to head to the track.

Soon after Mike will have an outburst over his missing wife, Yvonne Godfrey (Janet Hubert). General Hospital spoilers say Mike will shout about them taking Yvonne away. He’ll end up ripping into Marcus Godfrey (Nigel Gibbs), but Sonny will get him to calm down. That’ll set up a conversation about Yvonne’s rapid deterioration, which led to Marcus putting her in a hospital and letting her be fed through a tube.

Gladys won’t think that’s the right call. She’ll talk about helping a friend who had Alzheimer’s die with dignity and allowing her to leave the world in peace. Later, Mike will urge Sonny to invite Gladys to celebrate the holidays with the family.