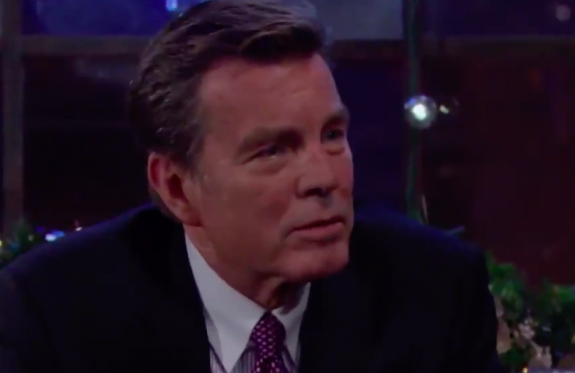 The Young and the Restless (Y&R) spoilers for Tuesday, December 24 tease that Kyle Abbott (Michael Mealor) and Lola Rosales (Sasha Calle) will light their Christmas tree and talk about the family that they miss. Kyle talks about his mother and how much she would like Lola.

Lola admits that she misses Miami and she wishes she could spend time with Mia Rosales’ (Noemi Gonzalez) new baby. Lola notices that Kyle brings up Theo Vanderway (Tyler Johnson) several times and wonders why he’s obsessing over his newfound cousin.

Summer Newman (Hunter King) spots Theo at The Society and checks in with him. Theo complains that Kyle tried to sabotage him at Jabot. He goes on to say that all the smart and beautiful women fall for Kyle.

The Young and the Restless Spoilers: Sharon and Rey Headed For A Break Up – Will Rey Move On With Victoria?

Y&R spoilers state that Summer realizes that he means Lola and she blurts out, “You want Lola? That’ll never happen.”

Summer muses that Theo wants Kyle’s life and suggests he backs off. She encourages him to focus on his own job and developing a life for himself.

Chance Chancellor (Donny Boaz) sits down and chats with Paul Williams (Doug Davidson). Y&R spoilers tease that Chance inquires how tough investigating cases are on relationships, hinting that he’s ready to settle down. Paul asks if he’s sure he’s ready to put roots down as he has a habit of leaving town on a whim.

Meanwhile at Billy Abbott’s (Jason Thompson) house, Jack Abbott (Peter Bergman) shows up to check on him. Jack overhears him talking to a client and he’s thrilled he’s working again. Billy complains that he’s trying to figure out who he is without Jabot.

Billy tells his brother that his family will be going out of town to Telluride for the holidays. Jack thinks family time will be good for him as he has been worried about him. Of course, Billy is dismissive, shouting that Jack has nothing to worry about.

Nick Newman (Joshua Morrow) spots Phyllis Abbott (Michelle Stafford) and questions where Chelsea Newman (Melissa Claire Egan) is. Phyllis snaps back for him to check Adam Newman (Mark Grossman). Of course, Nick did not like that comment and questions if she was going to spend Christmas with him and their daughter.

Chelsea shows up and Phyllis leaves as Nick pressures her about spending time together with the boys.

The Young and the Restless Spoilers: Michael And Lauren Get A Surprise Just In Time For The Holidays @celebratesoaps #YR #YoungandRestlesshttps://t.co/hYrQVNs9eN

Phyllis meets up with Billy as he shares news of his new job. She thinks he is too good for the job and urges him not to shortchange himself. Y&R spoilers state that Billy is proud of Phyllis for standing her ground on being fired from the hotel.

After Phyllis leaves, Billy looks confused as he is trying to figure out who he is without Jabot. It’s clear he’s feeling very lost.

Across town, Lola arrives home and gets a text from Theo asking her to meet him for a drink. She looks at Kyle and puts her phone down. At Society, Summer watch Theo stare at his phone waiting for Lola to respond to him.

Billy joins a poker game at the dive bar. He moves away quickly, but it’s clear his old habits are about to come out to play.

Keep watching CBS to find out what will happen next on The Young and the Restless.