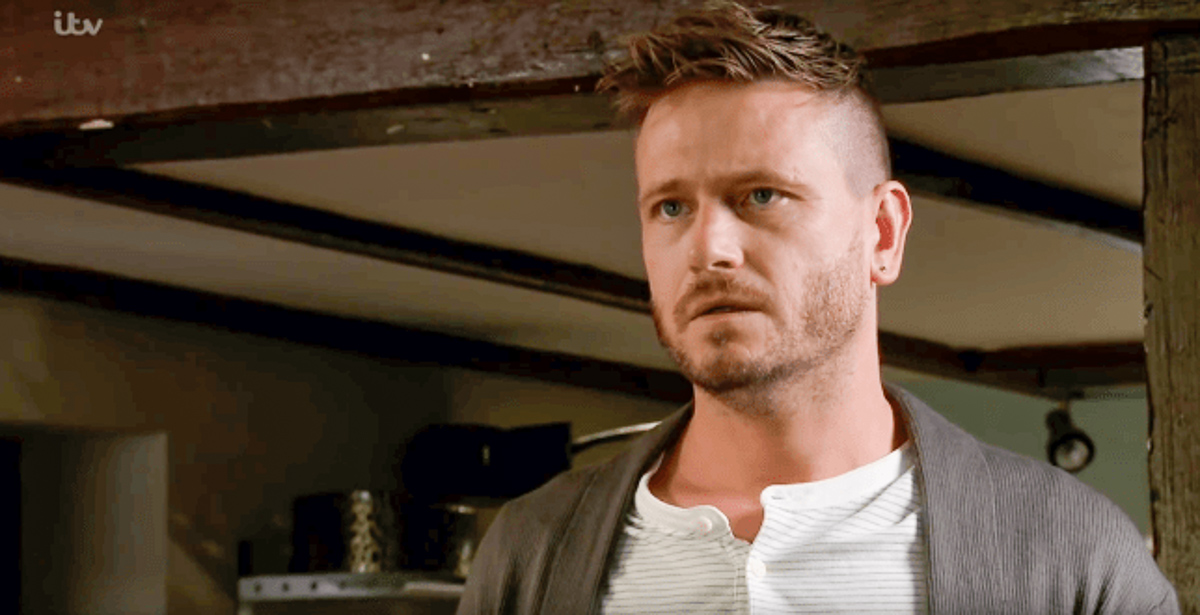 Emmerdale spoilers for the week of December 30 reveal three significant plots are going to happen. David Metcalfe (Matthew Wolfenden) and Jacob Gallagher (Joe-Warren Plant) wait for the paternity test results. They will learn which one of them is the father of Maya Stepney’s (Louisa Clein) baby. Also, Charity Dingle (Emma Atkins) will brainstorm a plan. Meanwhile, Marlon Dingle (Mark Charnock) freaks over some news.

One of the Christmas spoilers includes a baby being left on David’s doorstep. It is the child that Maya was pregnant with when she went to prison. Now she is out, which is stressful enough for David and Jacob to deal with. In fact, we have already seen Jacob spiral downward after hearing the news. Now that he is getting help for his trauma, there is another bombshell to deal with.

It is teased that David and Jacob will wait for the paternity test results. Until they find out who the father is, it is agreed that they will keep quiet about the situation.

It is indicated that Charity will come up with a plan. No additional information about this storyline was released, but it could refer to a few different situations. First, she is causing trouble with Cain Dingle (Jeff Hordley). It has to do with her actions regarding Nate Robinson (Jurell Carter). Could it have something to do with the family feud?

Another theory is that it revolves around Nate Dingle’s (Jack Downham) medical crisis. He is rushed to the emergency room after a drug overdose. She blames Graham Foster (Andrew Scarborough) for the health crisis.

There is still the issue of what is going on with Sarah Sugden (Katie Hill), too. Could Charity’s plan have something to do with getting bad boy newcomer Danny (Louis Healy) away from the teenage girl?

Emmerdale spoilers reveal Kim Tate’s (Claire King) scheme to get rid of a problem led to her get Rhona Goskirk (Zoe Henry) out of town. She predicted that Graham would go with her. Although Rhona is tempted to take the surprise job offer, there has been some back and forth with the decision. This is mainly due to Graham.

In two weeks, expect Marlon to find out that Rhona has quit her job at the vets. When he discovers this news, he will confide in Paddy Kirk (Dominic Brunt) about his concerns. If Rhona leaves town, Marlon worries there will be no way to stop her from taking Leo Goskirk (Harvey Rogerson). With Graham’s murder happening soon, could Marlon’s desperation lead to a deadly action?

Be sure to tune in to catch up on everything happening with the soap right now. Come back here often for Emmerdale spoilers, news, update and rumors!