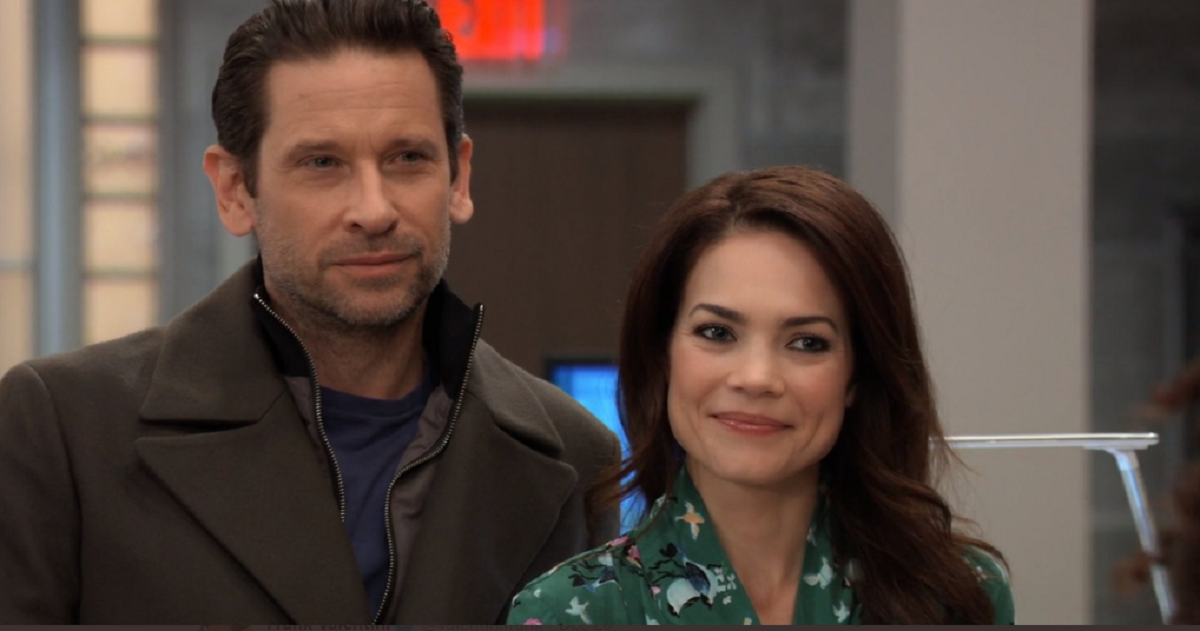 General Hospital (GH) spoilers update for Thursday, December 26, teases that some Port Charles surprises are in store. We should mention that GH won’t air a new episode on Wednesday, but they’ll be back with some hot drama on Thursday. Here’s what you can expect if you’re watching in the U.S.

First, Anna Devane (Finola Hughes) will be torn over her next move. GH viewers will recall that Anna found a connection between the gunman and Peter August (Wes Ramsey), who both worked at EuroTech at the same time. Since the company was a DVX front, it’s easy to see why Anna will struggle with this information.

Hamilton Finn (Michael Easton) will offer Anna a warning in Thursday’s episode. He’ll insist that Anna needs to reach out to the PCPD or Robert Scorpio (Tristan Rogers). Finn will worry that more lives will be lost if Anna doesn’t do something.

As for Violet Barnes (Jophielle Love), she’ll start asking questions about her mommy and whether she’ll be home for Christmas. When distractions don’t work, Finn will sit Violet down and assure her of her mother’s love. He’ll suggest that Hayden Barnes (Rebecca Budig) must have good reasons for staying away before handing over a present for Violet to open.

At Turning Woods, Gladys Corbin (Bonnie Burroughs) will upset Sonny Corinthos (Maurice Benard). Sonny will realize Mike Corbin’s (Max Gail) excited about Gladys taking him to the track, so Sonny will voice his displeasure. Gladys and Mike’s plans will be derailed anyway thanks to missing Yvonne Godfrey (Janet Hubert). Mike will go into meltdown mode over his wife being taken away.

Marcus Godfrey (Nigel Gibbs) will appear and get an earful from Mike, but Sonny will convince his father to go sit. Yvonne’s been hospitalized and has a feeding tube, but Gladys will suggest maybe Yvonne hasn’t been eating on purpose. She’ll mention a friend doing the same thing in an effort to die with dignity.

After Mike gets assurance that Yvonne will return, talk will turn to holiday plans. Mike won’t want Gladys to be by herself, so he’ll push Sonny to give her an invite to the Christmas gathering. Meanwhile, Peter will dismiss Maxie Jones’ (Kirsten Storms) claims that he’s a hero. After all, he shot a man. Maxie will insist the true bad guy’s still out there – and Jason Morgan (Steve Burton) won’t rest until he finds him.

Over with Brook Lynn Ashton (Amanda Setton), she’ll bond with Julian Jerome (William deVry) after she shows off some pics of Leo Falconeri (Aaron Bradshaw). Julian will be thrilled to see photos from the time of Leo’s life that he missed. It’s a wonderful gift, and he’s grateful to Brook Lynn. She’s perplexed by what a complex person Julian is emotionally.

Afterward, Brook Lynn will cross paths with Maxie and Peter. General Hospital spoilers say Maxie will gloat about what a big success she is before Brook Lynn eventually takes off. She’ll wish Peter luck in dealing with Maxie. Once Brook Lynn’s gone, Maxie will discuss how Brook Lynn was never really sorry for her mistakes like Peter was.

At home, Franco Baldwin (Roger Howarth) will still be in shock over Elizabeth Baldwin’s (Rebecca Herbst) bombshell. She revealed that Franco slept with Kim Nero (Tamara Braun) while he had “Drew Cain’s” memories, so Franco will hate that he hurt Liz. Of course, Liz will put the blame on Kim and “Drew.” She’ll also point out that Kim can’t be confronted since she already headed out of Port Charles.

Once Liz assures Franco that she trusts in his love for her, it’ll be time to lighten the mood. Cameron Webber (William Lipton) will be a little miffed about his community service later, but this is still the best Christmas the “Friz” family could hope for. Jake Webber (Hudson West) will show off some art he made while Franco was out of the picture. It’ll be nice to see Franco, Liz and the boys sharing in some holiday joy.

At GH, Willow Tait (Katelyn MacMullen) will nearly be tricked into handing “Wiley Cooper-Jones” (Erik and Theo Olson) to Nelle Benson (Chloe Lanier). Before Willow can give “Wiley” to the manipulative mom, Michael Corinthos (Chad Duell) will put a stop to it. He’ll lash out at Nelle and make it clear this isn’t Willow’s fault. Brad Cooper (Parry Shen) will take “Wiley” in his arms later and suggest he’s eager to take the kid home.

Finally, Tracy Quartermaine’s (Jane Elliot) jaw will drop over the redecorated Quartermaine mansion. She’ll seem horrified as she gapes at the new color scheme and furniture. Once Brook Lynn appears and calls her “Grannie,” her grandmother will insist she’d like to be called Tracy instead.