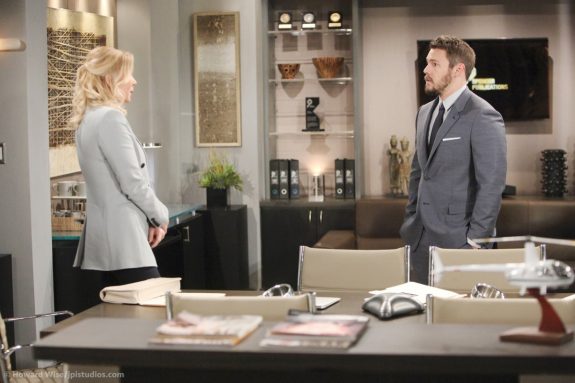 The Bold and the Beautiful spoilers for Thursday, December 26, tease that the action’s really heating up on the CBS soap. But before we get into that, we have a quick programming update. B&B will show a special encore episode on Wednesday, December 25th for the Christmas holiday, so the next new episode that viewers will see will be on Thursday, December 26th, and we’ve got the scoop about what will happen on Thursday right here.

First off, Brooke Forrester (Katherine Kelly Lang) will learn more details about the plan that Steffy Forrester (Jacqueline MacInnes Wood) and Liam Spencer (Scott Clifton) have going on with respect to Thomas Forrester (Matthew Atkinson). As B&B viewers know, Brooke has just heard from Steffy that they’ve enlisted Zoe Buckingham (Kiara Barnes) in a scheme to spy on Thomas and find out what he’s up to.

The Bold and the Beautiful Spoilers: Is Thomas Playing Zoe? Forrester Model Gets Caught In The Heat Of The Moment

Of course, Liam doesn’t trust Thomas at all, and he thinks that Thomas is still obsessed with Hope. He strongly suspects that Thomas is only pretending to be interested in Zoe in order to get Hope to agree to work with him on her line. As B&B viewers know, Hope desperately needs a designer for Hope For The Future, so that she stands a chance in the upcoming fashion showdown against Steffy and Sally Spectra (Courtney Hope).

Bold And The Beautiful Spoilers: Brooke Forrester Feels Left Out

Well, on Thursday’s episode of B&B, Brooke and Steffy will continue their conversation about the plot to use Zoe to find out what Thomas is up to. According to B&B spoilers, Brooke will have some strong feelings about the whole plan. First, she’ll feel that she’s been left out of the plan. Of course, Brooke has been insisting for months that Thomas is disturbed and needs professional help.

Recently, Brooke has even suggested that Thomas’ behavior rises to the level of being psychopathic. She’s anxious to get Ridge Forrester (Thorsten Kaye) to see that she’s right about Thomas, so that the two of them can repair their marriage. At any rate, it seems that Brooke may feel a bit hurt that Liam and Steffy didn’t include her in their big scheme with Zoe. But now that she’s filled in, she might have some input to give on the plan.

Of course, Brooke would probably like to be kept apprised about the plan, since she wants to be a part of bringing Thomas down. And it seems that she’ll have some opinions about the efficacy of the plan as well, as B&B spoilers say that Brooke will tell Steffy that they may have a hard time outwitting Thomas. She believes that Thomas is a master manipulator, and she might even suspect that he could be onto their plan.

At any rate, despite her reservations about Liam and Steffy’s plan, it appears that Brooke will ultimately be on board with it. But according to B&B spoilers, she and Steffy will be hoping for very different outcomes to the plan. Steffy is hoping that Thomas is truly reformed and that he’s no longer obsessed with Hope, while Brooke will want to find evidence that Thomas is dangerous just like she believes to be true.

Interestingly, the whole plan is banking on Zoe actually doing her job and betraying Thomas. There’s an interesting wrinkle in the plan, though, and that’s that Zoe seems to be developing real feelings for Thomas. And according to B&B spoilers, Zoe and Thomas will wind up pushing forward in their relationship, as they ultimately make love. This will for sure be a deliberate move on Thomas’ part in order to convince everyone that he’s moved on from Hope.

But for Zoe, the whole scenario will seem real. And the closer Zoe gets to Thomas, it gets more unlikely that she’ll be willing to spy on him and betray him. Still, Steffy, Liam, and Brooke will be banking on Zoe to come through for them. Will she?