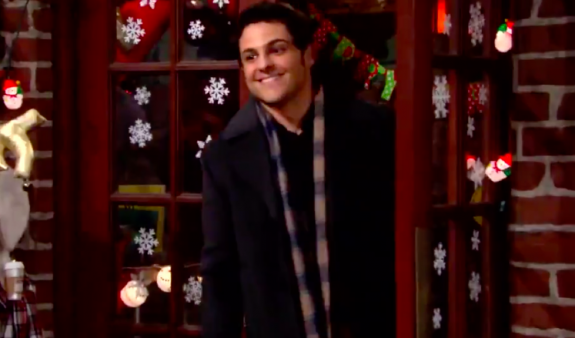 The Young and the Restless (Y&R) spoilers for Friday, December 27. tease that Ashely Abbott (Eileen Davidson) will catch up with Traci Abbott (Beth Maitland). They’ll discuss Ashley and Jack Abbott’s (Peter Bergman) difficulties earlier this year and how they made up. They’ll be disappointed that Dina Mergeron (Marla Adams) can’t join them tonight, but a restaurant would overwhelm her. They’ll also touch on the current tension between Theo Vanderway (Tyler Johnson) and Kyle Abbott (Michael Mealor).

Next on Y&R, at home, Billy Abbott (Jason Thompson) will be working when he texts Amanda Sinclair (Mishael Morgan) to let her know that he’s home tonight. Jack will arrive and insist that Billy come to the Abbott dinner – Billy will promise that he’ll be there. Amanda will then text asking him to go out for food with her, and he’ll leave Victoria Newman (Amelia Heinle) a voicemail before texting Amanda that he’ll meet her later.

Meanwhile, at Society, Abby Newman (Melissa Ordway), Kyle, and Lola Abbott (Sasha Calle) will prepare for the Abbott Christmas dinner. Lola will reference Theo having other plans for the evening, and Kyle will question how she knows that. She’ll admit that they text each other before telling Kyle to have some sympathy for Theo, since he’s all alone for the holiday.

The Young and the Restless Spoilers: Kyle’s Negativity Towards Theo Costs Him Lola And Summer

Young And The Restless Spoilers: Fen Baldwin Returns For The Holiday

Next on Y&R, at Crimson Lights, Michael Baldwin (Christian LeBlanc) and Lauren Baldwin (Tracey E. Bregman) will get coffee in advance of the Abbott dinner when Fenmore “Fen” Baldwin (Zach Tinker) calls, then appears in the doorway. Lauren will be thrilled to see him. Turns out, he’s now living in a halfway house, and they’ll talk about his relapse and recovery. His parents will be proud that he got help.

Back at Society, various people will gather for the Abbott dinner. Traci and Ashley will arrive, followed by Jack. Kyle will even offer to invite Theo to the gathering, which will make Lola happy. Fen, Lauren, and Michael will arrive, and Fen will congratulate Lola and Kyle on getting married. Billy will arrive late, and he and Fen will talk a bit about Fen’s rehab.

Jack will offer a toast for everything they have to be thankful for. He’ll reference Dina and her struggle, as well as the loss of Neil Winters (Kristoff St. John) this year. Later, as things wind down, Traci will surprise everyone with copies of her new novel. Lots of little conversations among the attendees will take place, and Billy will leave after getting another text from Amanda.

Michael, Fen, and Lauren will leave, and as they’re on their way out, Fen will give his parents a compass as a symbol of them being there to guide him. He’ll tell them that they saved his life, and they’ll have a nice family moment.

Next on Y&R, back at their apartment, Kyle and Lola will exchange gifts. He’ll have given her a book about the best restaurants, along with a voucher to travel to any one of them. Kyle will open his gift from Lola, which is a framed picture of the night sky in Idaho that includes their special star. She’ll tell him that she booked a cabin in Idaho just for them.

Meanwhile, at home, Billy will call Victoria and tell her that he’s going to bed. He’ll consider Amanda’s text, but will end up playing solitaire by himself.

Finally, on Friday’s new episode of Y&R, Dina will take in the Abbott family Christmas tree along with Jack, Traci, and Ashley. She’ll open her presents, and Jack will read The Night Before Christmas, while Traci sings Oh Come All Ye Faithful. Dina will start singing, and the rest of them will join in, singing together.