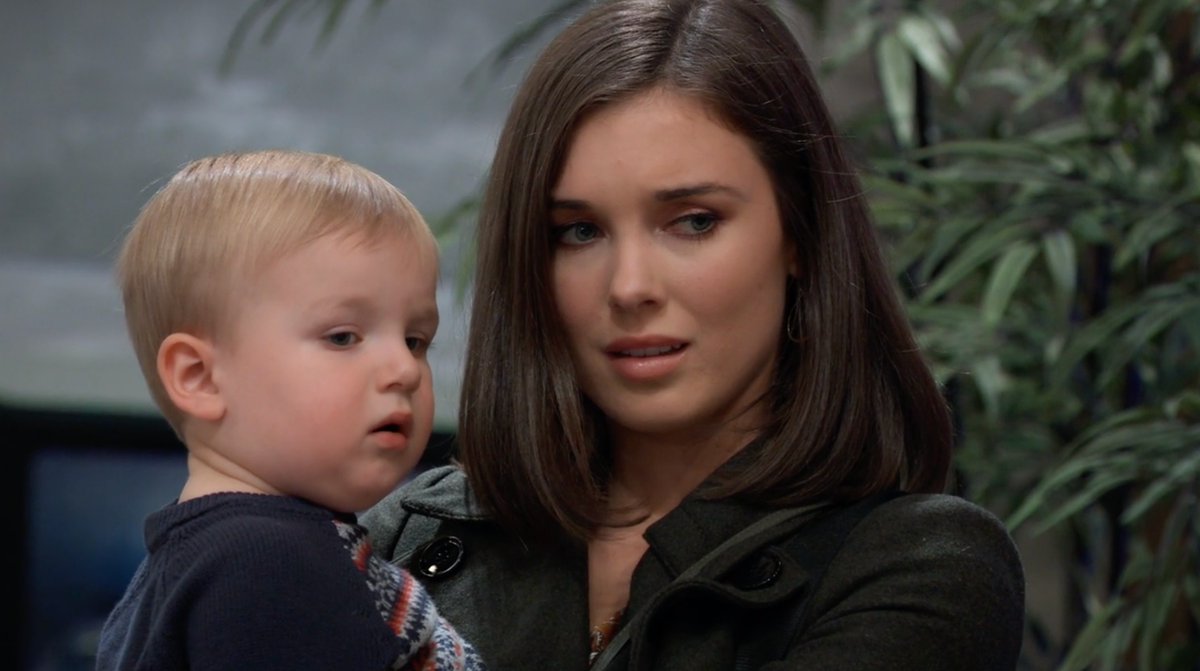 General Hospital (GH) recap for Thursday, December 26, 2019, reveals Mike Corbin (Max Gail) is pacing the floor. Mike tells Sonny Corinthos (Maurice Benard) he has to get out of there.

Sonny offers to take Mike where he wants. Gladys Corbin (Bonnie Burroughs) is there to take Mike somewhere. Sonny thinks this is about their deal. Gladys says Mike has been asking for her. Gladys is taking Mike to bet on horses. Yvonne Godfrey (Janet Hubert) has been taken to the hospital to have a feeding tube inserted. Gladys tells Marcus Godfrey (Nigel Gibbs) he is making a mistake.

Sonny tells Gladys to back off Marcus. Gladys talks about a friend who had stopped eating. Gladys says patients do that for their dignity. Bridget says her friend’s death was miserable. Marcus tells Mike that Yvonne is still in the hospital. Sonny encourages Mike to get into the Christmas spirit by singing some carols later. Bridget talks about not having anywhere to celebrate Christmas. Mike wants Sonny to invite Gladys to his house.

General Hospital Spoilers: Ned Struggles To Be A Good Dad, Can He Help Brook Lynn?

General Hospital’s Franco Baldwin (Roger Howarth) can’t believe he slept with Kim Nero (Tamara Braun). Liz Baldwin (Rebecca Herbst) tells Franco that Drew Cain (Billy Miller) slept with Kim, not him. Liz blames Kim for the whole situation. Liz tells Franco he isn’t to blame for what happened. Franco apologizes for going away. Franco says if the boys don’t make their lists they get socks. Cameron says this day is perfect except he has to do his community service. Cameron dresses up for community service. Liz snaps a picture. Cameron snaps a picture of Liz and Franco.

General Hospital’s Michael Corinthos (Chad Duell) talks to Brad Cooper (Parry Shen), Brad is stunned the Wiley Cooper Jones is at the hospital. Brad doesn’t want Wiley around Nelle Benson. Meanwhile, Nelle approaches Willow and talks about her son. Michael assures Brad that Wiley is fine between him and Willow, he has great care. Brad decides he needs to see Wiley. A nurse interrupts needing Brad to sign papers. Michael goes to get Wiley as Nelle asks to hold him.

Michael stops Willow before she hands Wiley to Nelle. Michael tells Willow that is Nelle and ushers her and Wiley away. Nelle speaks to Michael who tries to ignore her. The guard approaches claiming to have been watching Nelle the whole time. Nelle is supposed to leave for Pentonville in a matter of minutes. Willow can’t believe she almost fell into Nelle’s trap. Brad holds Wiley. Michael asks Brad if he knew Nelle was there. Brad tells Michael why he didn’t mention it. Brad can’t think about Nelle. Brad says he is taking Wiley home. Michael and Willow both offer to be there for Michael.

General Hospital’s Anna Devane is investigating Peter August (Wes Ramsey). Hamilton Finn (Michael Easton) joins Anna, who seems distracted. Finn asks if Anna found something on Peter. Anna tells Finn what she has found. Anna tries to defend Peter. Finn wants to know why Anna is waiting to tell Robert what is going on. Violet Barnes (Jophielle Love) interrupts asking about her mom. Finn doesn’t know what to tell her. Anna shows Violet her stocking. Violet asks if her mom has a stocking too.

Anna tries to explain that Hayden Barnes (Rebecca Budig) had to go away. Violet doesn’t care he mom needs to come home now. Finn tries to explain that the secret was very important. Anna and Finn try to explain that Hayden will be home soon. Finn gives Violet a gift saying her mom sent it. Finn sets Violet up at a table to make something with beads. Anna says they will have to figure out what to tell Violet. Finn has no idea where Hayden is. Anna tells Finn he has to reassure Violet that he’s not going anywhere. Finn tells Anna that telling the truth about Peter could save lives. Anna is shocked that Finn sounds like Robert. Finn asks Anna what she is going to do.

General Hospital’s Peter and Maxie Jones (Kristen Storms) are taking up winter coats for kids. Jake Spencer (Hudson West) and Cameron Webber (William Lipton) make a donation. The boys are glad to have Franco back, Maxie thinks they have Peter to thank for that. Peter isn’t proud of killing a man. Maxie thinks the man behind Franco’s attack should be put away. Jake and Cameron take a Christmas tree home. Jake has made pictures for Franco every day he has been gone. Franco sits with the boys and hugs them. Maxie gives Peter a Christmas Stocking. Peter has never had one before.

General Hospital’s Brook Lynn Ashton (Amanda Setton) approaches Julian Jerome (William DeVry). Brook and Julian discuss Lucas Jones (Ryan Carnes). Brook wonders how Olivia Quartermaine (Lisa LoCicero) and Julian got together. Brook shows Julian picture of his son when he was a baby. Brook promises to make Julian an album. Brook confronts Julian about thinking she was a hooker. Brook storms off and runs into Maxie. Maxie introduces Brook to Peter. Maxie talks about everything going on in her life. Maxie tells Brook to grow up and stop making stupid mistakes. Peter asks what that is about. Maxie tells Peter what she thinks about Brook. Tracy Quartermaine (Jane Elliot) arrives home and is shocked by what she finds.