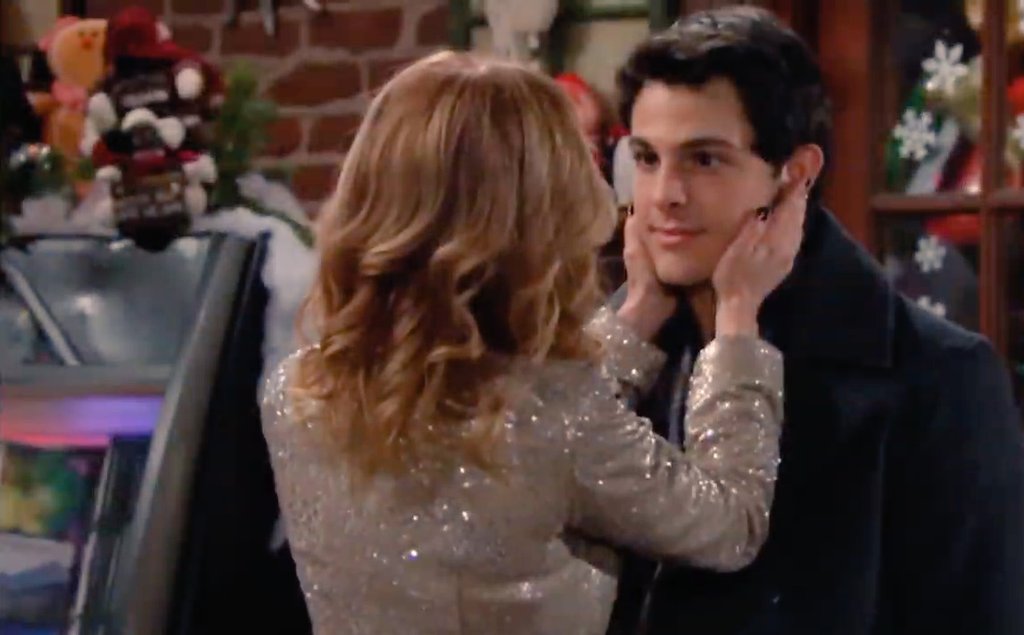 The Young and the Restless (Y&R) spoilers for Friday, December 27, tease that Ashley Abbott (Eileen Davidson) and Traci Abbott (Beth Maitland) will happily wish each other good morning at the Abbott estate. They’ll catch up on the recent goings-on in the family and establish the that the Abbott family dinner will be at a restaurant this year and that Dina Mergeron (Marla Adams) won’t be able to attend, as the scene would be overwhelming for her.

Meanwhile, at Society, Abby Newman (Melissa Ordway), Kyle Abbott (Michael Mealor), and Lola Abbott (Sasha Calle) will get Society all set up for the dinner. Abby will wonder aloud whether Theo Vanderway (Tyler Johnson) is coming, and Lola will say that Theo has other plans. Kyle will ask how Lola knows that, and Lola will admit that she and Theo texted. That will irritate Kyle, but he’ll later apologize to Lola and they’ll go on with the festivities.

Next on Y&R, at his home, Billy Abbott (Jason Thompson) will be on a heated call with some colleagues trying to get the big deal done. He’ll then text Amanda Sinclair (Mishael Morgan), saying that he’ll be in town overnight. Suddenly, Jack Abbott (Peter Bergman) will burst in and invite Billy to the dinner at Society. Billy will agree to attend, then he’ll text Amanda about getting together after.

The Young and the Restless Spoilers: Nikki Finds An Abandoned Baby On Ranch – Could The Infant Be Adam’s Daughter?

At Crimson Lights, Lauren Baldwin (Tracey E. Bregman) will be feeing melancholy since she and Michael Baldwin (Christian LeBlanc) will be spending Christmas without Fenmore “Fen” Baldwin (Zach Tinker). Michael will comfort his wife, and they’ll suddenly receive a call from Fen. They’ll talk to him over speakerphone, and Fen will say that there was a mix up with the delivery of their present, so he had to make other arrangements.

Suddenly, he’ll appear in the doorway, and Michael and Lauren will be pleasantly surprised to see their son back home looking happy and healthy. They’ll discuss his relapse and he’ll say that he’s living in a halfway house now and things are going well for him. Fen will tell them that he’s sorry and will ask for their forgiveness. He’ll say that he felt like a disappointment when he relapsed, but they’ll tell him that he’s absolutely not a disappointment.

Young and The Restless Spoilers – The Abbotts Celebrate Christmas

Next on Y&R, attendees will start to arrive for dinner at Society. Abby and Ashley will catch up, and Fen will congratulate Kyle and Lola on their wedding earlier this year. Billy will arrive a little late, and he’ll listen intently to Fen talk about his relapse and recovery, and about how he’s trying to be the best version of himself. Later, Jack will offer a toast as everyone stands around with drinks.

He’ll say how thankful he is for everyone who is there, as well as for those who aren’t there this year – including Dina and Neil Winters (Kristoff St. John). As things wrap up, Billy will get his deal done over the phone, freeing him up to go to Telluride with Victoria Newman (Amelia Heinle) and the kids. And Traci will give everyone signed copies of her new novel.

On their way out of the restaurant, Fen will stop to give Michael and Lauren their Christmas present, which is an antique compass as a symbol of them being there to guide him. Fen will tell his parents that they saved his life, and they’ll share a group hug.

Next on Y&R, at their apartment, Kyle and Lola will get comfortable and open their presents together. Kyle will give Lola a book about the best restaurants along with a voucher to travel to any of them. Lola will be touched, and Kyle will love his gift, which is a framed picture of the Idaho night sky. Lola will say that she booked a cabin for them there so they could enjoy the scene in person.

Meanwhile, at home, Billy will speak to Victoria and the kids by phone, and he’ll tell Victoria that he’s going to sleep to rest up for his flight in the morning. Afterward, he’ll look at a text from Amanda, but ultimately, he’ll just play cards and drink beer by himself.

Young and The Restless Spoilers – Dina Mergeron Celebrates With Her Family

Finally, on Friday’s new episode of Y&R, Jack will have arranged for Dina to have a quiet Christmas celebration at the house with Abby, Ashley, Traci, and himself. Dina will marvel at the Christmas tree and the gifts, and after opening her gifts, Jack will read The Night Before Christmas.

Dina’s children will be truly grateful to have some nice moments with their mother, and Jack will remark that he should have brought in carolers, which will prompt Traci to start singing Oh Come All Ye Faithful. Dina will be delighted, and she’ll stand and start singing along. Soon, they’ll all be singing, and they’ll join hands and tell each other Merry Christmas.