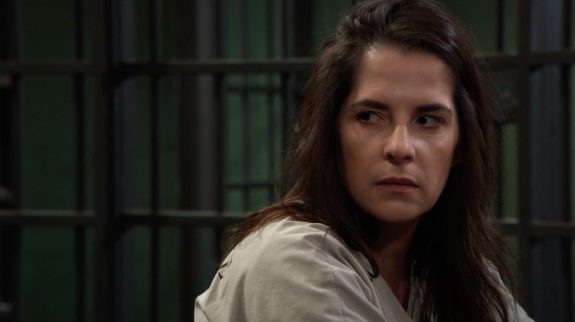 Santa tells Leo is it better to give than to receive. Santa tells Scout her candy cane is magic and will bring her memories of her mommy. Trina says that Cameron only has one more week of community service. Dev goes to get drinks, Trina tells Jocelyn that Dev has a crush on her. Alexis Davis (Nancy Lee Grahn) arrives and discusses Lucas with Jordan. Jordan gets a call about a friend who has passed away.

General Hospital’s Jason Morgan (Steve Burton) brings Danny Morgan (Porter Fasullo) and Scout Cain (Ella Ramacieri) to see Santa. Scout tells Santa what she wants for Christmas. Scout wants mommy to come home for Christmas. Jason discusses Christmas decorations with the kids. Jason asks Alexis to take the kids home. Jason has to do something for Sam. Jason arrives home with a surprise, Sam is with him.

Nelle tells Sam her baby is gone. Sam has her kids but can’t be with them. Nelle continues to taunt Sam until she threatens to shut her up. The guard comes back and tells Nelle that Sam has been paroled. Alexis is thrilled Sam is home and kisses her goodbye. Jason and the kids put the final touches on the tree. Sam hugs Jason.

Brook and Michael wonder why Tracy is back in town. Brook warns Michael to watch his back. Ned and Olivia arrive and are surprised to see Tracy. Sasha talks about the deal Michael made for her with Lucy Coe (Lynn Herring). Ned calls Jason and invites him over, Jason declines and thanks Ned for his help. Ned tells Tracy a lot has happened since she’s been gone. Ned begins to play and they sing carols.