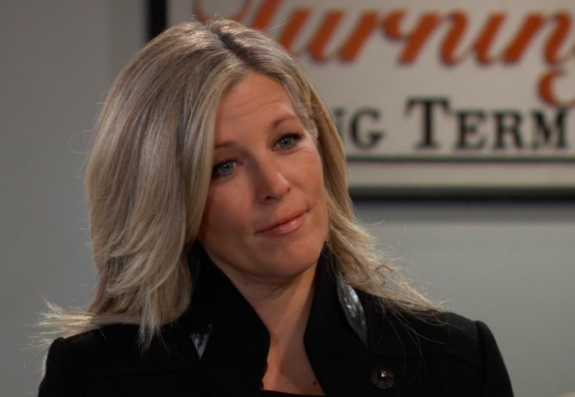 General Hospital (GH) spoilers for Monday, December 30, tease that Carly Corinthos (Laura Wright) will have another secret meeting with Jasper “Jax” Jacks (Ingo Rademacher). Of course, she’s not fooling Sonny Corinthos (Maurice Benard)! He already knows Carly and Jax are keeping him out of the loop on something major, so he’ll undoubtedly suspect they’ve been off discussing it somewhere.

GH Spoilers: Carly Corinthos Makes It Back To The House

Once Carly makes it back to the house, Sonny will wonder where she’s been. Carly will ask if this is an interrogation, so Sonny will admit he doesn’t know. He’ll think if Carly’s got something to confess, that’d certainly make things easier. General Hospital spoilers say Carly will get irritated over all the questions and suspicions. She’ll be sick of her own husband acting like she’s the enemy.

However, Sonny will point out that he wouldn’t have to treat Carly that way if she’d just tell him the truth. Carly will eventually admit it’s time for Sonny to know what’s going on. Will she confess as planned? Since General Hospital spoilers say Sonny will battle a sense of betrayal in the following episode, it sure sounds like it!

In the meantime, Jason Morgan (Steve Burton) will fret about Sonny and Carly’s conflict – as well as how Jax fits into it. GH fans know Sonny has quite a temper, so Jason may not want Sonny doing anything he might regret. Like it or not, Jax is Josslyn Jacks’ (Eden McCoy) father and she loves him. She’ll turn against Sonny if he pushes things too far.

General Hospital Spoilers: Jason Morgan Will Get A Hint About Sonny Corinthos’ Next Move

Jason will ultimately get a hint about Sonny’s next move and worry about his motives. Carly’s gotten herself into a big mess that’s only going to get bigger! At Wyndemere, Jax will arrive and most likely have a confrontation with Valentin Cassadine (James Patrick Stuart). Valentin may be annoyed by Jax’s presence, but he’ll feel confident he’s got a grip on the situation.

Meanwhile, Laura Webber (Genie Francis) will sit down for a chat with Curtis Ashford (Donnell Turner). General Hospital spoilers say they’ll have something important to discuss, so this may be about the custody battle that’s brewing. Curtis might bring Laura up to speed on his hunt for Claudette Beaulieu (Bree Williamson) and how it’s going so far.

Whatever the case, Curtis will be committed to helping Lulu Spencer (Emme Rylan) score the leverage she needs. General Hospital spoilers say some great drama’s ahead, so don’t miss what’s in store. We’ll give you updates as other GH news and rumors emerge. Stick with the ABC soap and don’t forget to check back often for the latest General Hospital spoilers, rumors, updates and news.