Days Of Our Lives Spoilers: Steve Reveals Himself To Salem 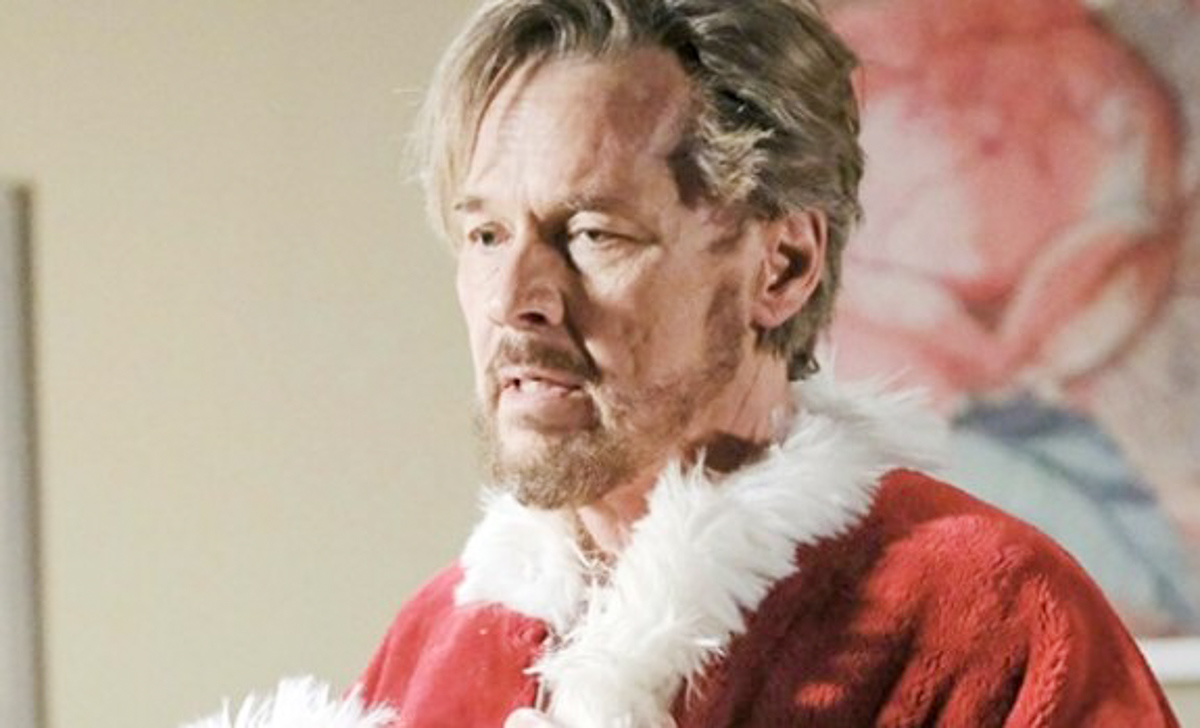 Days of Our Lives spoilers tease that Steve Johnson – or is that Stefano DiMera? (Stephen Nichols) will reveal himself to Salem in an upcoming episode of Days of Our Lives!

The big reveal will begin when Kayla Brady (Mary Beth Evans) suspects that the Santa Claus at Salem University Hospital’s children’s’ Christmas party is her ex-husband Steve Johnson. She will recognize something about the way he goes about handing out gifts to the children, and she’s been thinking about all those years when “Patchy Claus” came to give the children gifts at the hospital anyway and has had a hard time with those memories, getting tears in her eyes when she has talked about them.

She will sneak up behind Santa at the party and ask him straight out if he’s Steve, and Stefano will be affected by her question – perhaps there’s something left of Steve subconsciously after all that is affected by the woman he called “Sweetness” for all those years?

Days of Our Lives Weekly Spoilers December 23 to December 27: JJ Comes Clean While Eve And Hattie Both Receive An Early Christmas Gift

Then Kayla will follow Santa Claus “home” from the party and confront him about his lack of contact for the time he was away from her, confront him about why he never even showed up for his own sister’s, Adrienne Kiriakis’ (Judi Evans) funeral, and why he signed the divorce papers after having them for several months, and probably explain to him that she hadn’t really even wanted the divorce at the time, she was just trying to get his attention and to prove a point!

He had been calling fairly regularly, but then the calls just abruptly stopped, and it put her through hell not knowing if he was even dead or alive, and she couldn’t get any information from the ISA! Of course, once Steve had been undoubtedly kidnapped by Stefano or Dr. Wilhelm Rolf (William Utay) he would not have been able to make contact with anyone and even the ISA would not have known where he was, or they undoubtedly would have assigned and sent agents to search for him. But none of those things apparently ever happened, and Kayla certainly wasn’t contacted about Steve having gone missing! They never even contacted her as to if she had heard from him or not!

Days of Our Lives Spoilers – How Will Stefano DiMera Reveal Himself To Salem?

With Kristen DiMera (Stacy Haiduk) having returned to Salem intent on taking control of DiMera Enterprises, with Chad DiMera (Billy Flynn) and Gabi Hernandez DiMera (Camila Banus) fighting over the company that Stefano built, he may have to reveal himself as part of stepping in to take back what is rightfully his and running DiMera Enterprises himself. He may keep his son Chad on working with him, but he would not stand for Kristen trying to take it over, only being his daughter through adoption. He may also want to reveal his plans publicly as well!