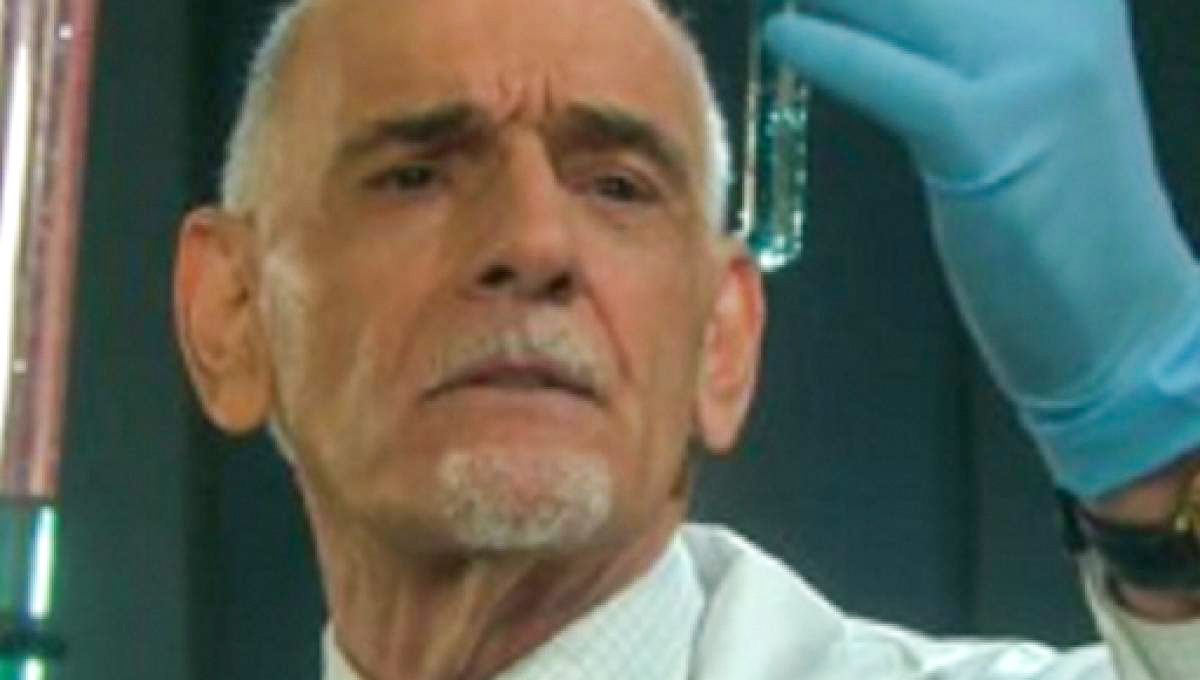 Days of Our Lives (DOOL) spoilers tease that “Stefano Dimera” (Stephan Nichols) may have taken Dr. Wilhelm Rolf (William Utay) for granted one too many times. Stefano had to think fast when Abigail Dimera (Kate Mansi) wanted access to the security footage rom the night Jennifer Horton (Melissa Reeves) was pushed off the balcony of the Bistro,

Abigail believed Eve Donovan (Kassie DePaiva) when she told Abigail that she didn’t do it. Eve has done a lot of horrible things and her tongue sometimes says things that she doesn’t mean, but Eve isn’t a cold blooded murderer. She prefers to make long term ways to make her enemies suffer like her plan to marry an amnesiac Jack Devereaux (Matthew Ashford) just to keep him away from Jennifer.

But Eve wouldn’t have pushed Jennifer off the balcony, and Abigail finally believes her. She’s mostly gotten involved just in case the killer is still out there. Abigail was shocked though when the video footage showed Dr. Rolf is actually the culprit.

DOOL Spoilers – Dr. Rolf didn’t do it either

But Dr. Rolf isn’t guilty of this particular crime either. As viewers know, it was Princess Gina (Kristian Alfonso), who has somehow managed to fool everyone into believing she is Hope Williams (also Kristian Alfonso) for over a year now. Jennifer had read the information on the hard drive that she stole that detailed Rolf’s plan to bring back Princess Gina. But the transfer had already taken place, and the Princess couldn’t risk being exposed. So she pushed Jennifer off the balcony and thought she would remain in a coma.

Eve was an easy target to frame since she had made a drunken spectacle of herself just a few minutes earlier. She even lamented to Roman Brady (Josh Taylor) that she wished Jennifer had died in the elevator accident. But Eve was just talking trash. After crashing the wedding, she went back to her hotel room and passed out.

But now that Abby has insisted on reviewing the video footage, it would be obvious that the original footage was doctored and that Eve was never there. So Stefano had Rolf’s image replace Eve’s. Dr. Rolf has been Stefano’s most loyal supporter and for Stefano to just throw Rolf under the bus, it might be time for Rolf to rethink his priorities. He will need to find a way to keep himself out of prison.

DOOL Spoilers – Dr. Rolf could offer to restore Hope Brady to stay out of jail

In order to stay out of prison, Rolf might only have a couple options. He could take another cyanide pill to give himself another temporary death or perhaps he could return Hope to her body, perhaps even Steve Johnson (also Stephan Nichols) too. And since Stefano and Princess Gina were so quick to abandon him, perhaps his will tur his back on them and do what’s best for him.

Rolf is a brilliant scientist but if Stefano isn’t going to appreciate and respect him, then maybe he will take Princess Gina away from him. Of course, all of this is assuming that someone finally figures out the Hope has been replaced. Here’s hoping Jennifer’s memories all come back sooner rather than later.

Will Dr. Rolf offer to restore Hope in exchange for staying out of prison. Will Stefano regret taking Rolf for granted? Only time will tell, so stay tuned to Days of Our Livesl airing weekdays on NBC. And don’t forget to check back here regularly for all your Days of Our Lives news, information and spoilers!