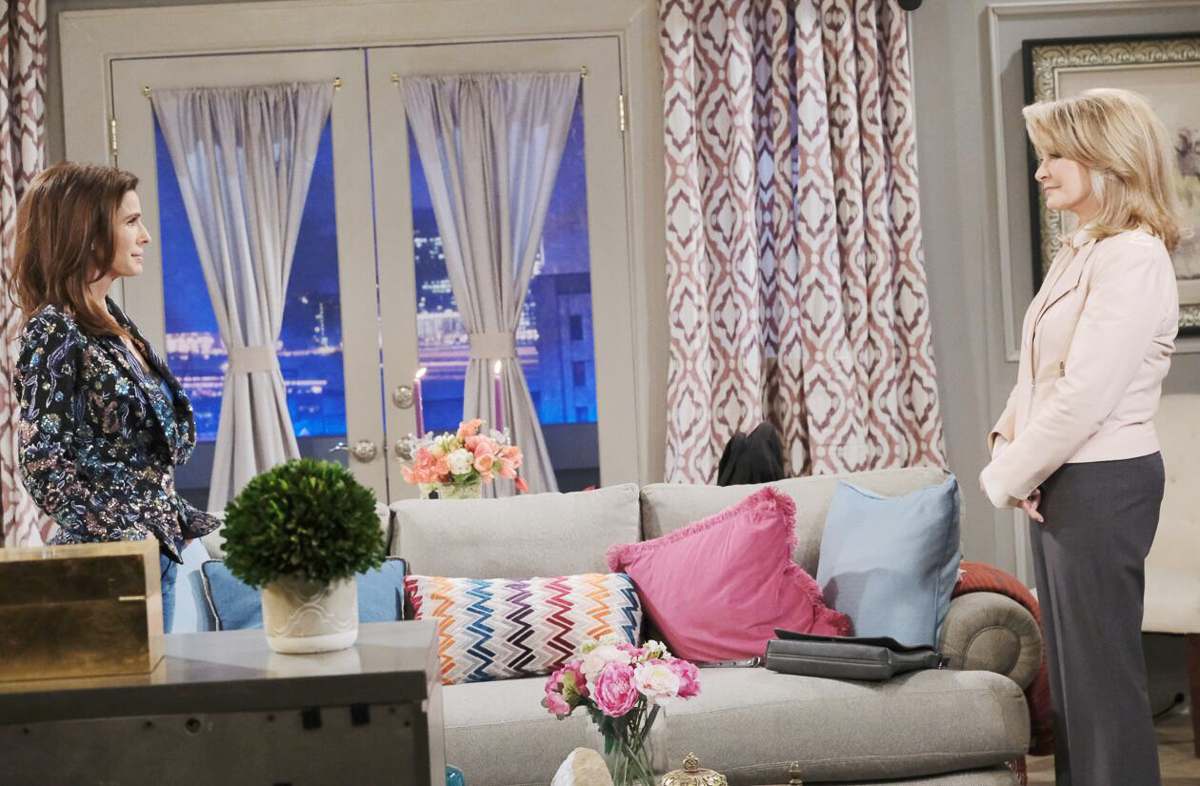 Days of Our Lives spoilers for the week of Monday, December 30 through Friday, January 3 tease another week of exciting drama for Days of Our Lives fans as we enter the new year of 2020! Wednesday, January 31 will be pre-empted but Monday, Tuesday, Thursday and Friday’s action promises to make up for it!

Days of Our Lives Weekly Preview

Eli Grant (Lamon Archey) and Gabi Hernandez DiMera (Camila Banus) caboodle in front of Room 311 at the Salem Inn, while outside Julie’s Place, Brady Black (Eric Martsolf) and Nicole Walker (Arianne Zucker) engage in a passionate embrace – not noticing as a glaring Kristen DiMera (Stacy Haiduk) with her eyes shooting daggers approaches them, dressed in her nun’s habit! Meanwhile, inside Julie’s Place, John Black (Drake Hogestyn) and Dr. Marlena Evans (Deidre Hall) are talking with Kayla and Justin, when suddenly John, Kayla, and Justin turn their heads, obviously looking at the same thing; it’s Steve Johnson (Stephen Nichols) complete with patch on his eye, announcing he’s back! Stefano DiMera apparently is disguising himself by not disguising himself except for the eye patch! Elsewhere, Lani Price (Sal Stowers) emerges from Room 311 at the Salem Inn, dressed in her nun’s habit, shocking Gabi and Eli as she approaches them!

Back in front of Julie’s Place, Brady confronts Kristen as Nicole looks annoyed; Brady wants to know why would Kristen care, she is married to God and they had broken up! Kristen makes a non-verbal statement as she pulls off her habit to reveal a low cut, slinky red dress, and as Brady starts walking away, she attacks Nicole!

On Monday, Dr. Marlena Evans confronts “Hope Brady” otherwise known as Princess Gina Von Amberg (Kristian Alfonso) about her feelings for her husband, John Black. Marlena definitely does not appreciate someone she considered a friend trying to move in on her husband, which is very un-Hope like to begin with, so Days viewers can expect some words between the two. Elsewhere, Gabi discovers her Gabi Chic store in Horton Town Square has been vandalized, with the window completely shattered and broken out. She will accuse Chad and Abigail DiMera (Billy Flynn, Kate Mansi) of the crime! Also on Monday, Kate Roberts (Lauren Koslow) threatens to expose Stefano, and Kristen is enraged when she spies Brady and Nicole kissing.

Days of Our Lives Spoilers: Kayla Drawn Back to Steve, But Stefano Only Has Eyes for Marlena

On Tuesday, Kayla, Marlena, Justin and John share theories about who the mystery Santa was that showed up at the children’s Christmas party at Salem University Hospital since now everyone knows it wasn’t Roman Brady (Josh Taylor) because his Santa suit had been stolen! Then, Eli Grant (Lamon Archey) receives surprising news when the security tapes from Gabi Chic are viewed and it shows a nun throwing a large flower pot through the window – who looks like Lani! Also on Tuesday, Julie and Doug’s New Year’s Eve party is crashed by an unexpected couple, and Kristen is tormented by the thought of Brady being with Nicole.

Wednesday is pre-empted for New Year’s Day programming, but Days of Our Lives will return on Thursday.

) Days Of Our Lives Spoilers: Is The “Real” Stefano Still Out There – Is He Aware Of Steve’s New Role? https://t.co/N7HQxqHNIH pic.twitter.com/ixlYgrHU6m

On Thursday, Marlena, John, Kayla and Justin are stunned – with no prior notice whatsoever, “Patch” shows up Julie’s Place during the New Year’s Eve Party and announces he’s back! As Days of Our Lives viewers can imagine, “Steveano” who is Stefano in Steve’s body, will not receive a warm welcome, in fact, Justin will rip into him and Kayla won’t be far behind! Outside Julie’s Place, where Kristen spotted Brady and Nicole kissing, she will tell Brady she wants him back, and when he declines and starts walking away, she will attack Nicole! Also on Thursday, Gabi will be stunned to learn that Lani is back in town.

Friday, Ciara Brady (Victoria Konefal) supports Ben Weston (Robert Scott Wilson) on the day of his final appeal, while Princess Gina as Salem Police Commissioner Hope Brady lashes out at Detective Rafe Hernandez, and fires him! Also on Friday, Xander Kiriakis (Paul Telfer) and Victor Kiriakis (John Aniston) realize that Ciara has been playing them, and Kayla confronts Steve one-on-one in an intense, emotional scene where “Steve” will coldly tell her that she and their family is not the reason he returned to Salem!