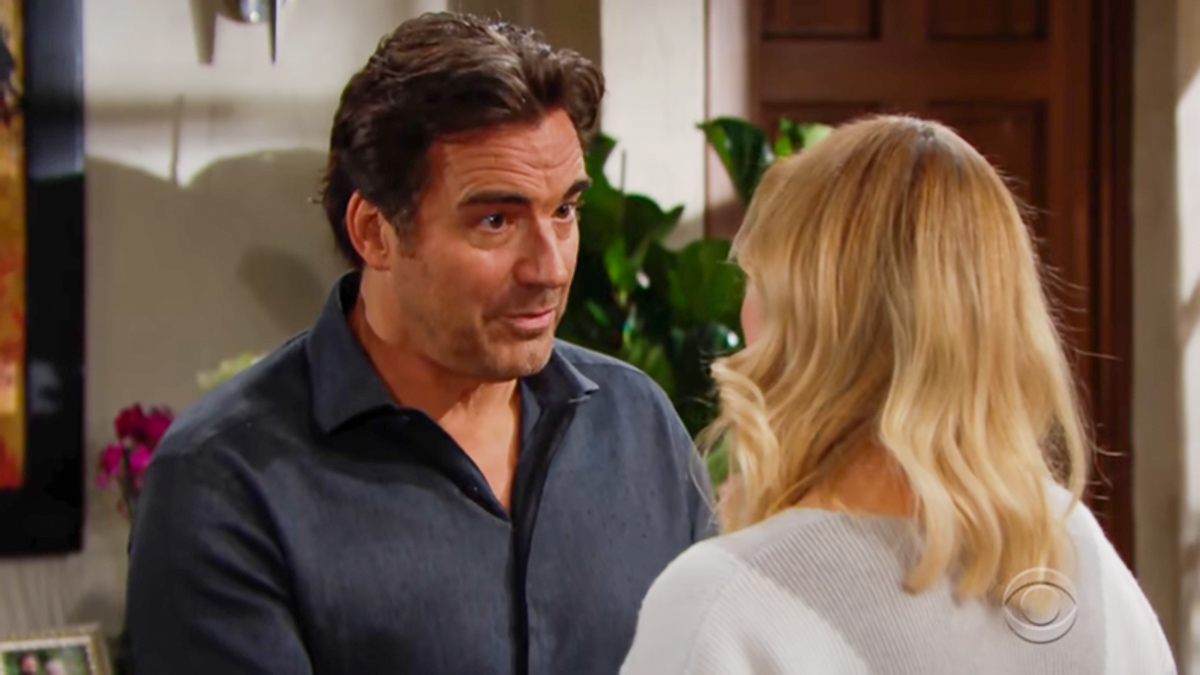 In the living room of the Forrester mansion, Ridge Forrester (Thorsten Kaye) changes his mind about the divorce he had recently pursued from his wife of many years, Brooke Logan (Katherine Kelly Lang). He looks in her eyes and takes her hands in his as he tells her, “You want to be together, right? Let’s tear up those divorce papers and revive our marriage, can we do that?” As viewers of the Bold and The Beautiful will recall, Ridge and Brooke had been at an impass over her refusing to accept that his son, Thomas Forrester (Matthew Atkinson) had changed since he came back to town, and that he was no longer a danger to her daughter, Hope Logan (Annika Noelle) who he had been obsessed with.

The Bold and the Beautiful Spoilers: Monday, December 30 – Liam’s Concerned About Zoe & Thomas’ Date – Zoe Gives Into Passion With Thomas

Thomas has his dad fooled, at least in Brooke’s opinion, by taking up with Zoe Buckingham (Kiara Barnes) who Brooke doesn’t trust either, since she had been such an integral part, along with Thomas, in the baby switch scheme where Hope was told her baby girl Beth (Zoe Pennington) was dead, and in reality she was adopted out to Ridge’s daughter Steffy Forrester (Jacqueline Macinnes Wood) who named her Phoebe. The truth had come out thanks to Thomas’ young son, Douglas Forrester (Henry Joseph Samiri) who had recognized the baby and told Liam Spencer (Scott Clifton) that Phoebe was really Beth! Will Ridge still want to work things out with Brooke if she tells him the truth, that she still thinks Thomas is manipulating Hope by dating Zoe?

The Bold and the Beautiful: Zoe Caught Up in Passion – Too Blinded to See Through Romantic Ruse? https://t.co/TI5nhQFC1B pic.twitter.com/NvMRQdXqAp

Meanwhile, at Forrester Creations, Hope tells Thomas it seems like he and Zoe seem to be getting a little more serious, as a scene of Thomas and Zoe kissing passionately is shown. Thomas tells Hope that he’s trying to move on with his life, asking her that’s what she wanted, right? Thomas may have started this relationship with Zoe as a way to make Hope jealous, and Liam and Steffy may have intended Zoe to romance Thomas as a way of spying on him to see if he was still obsessed with Hope or not, but it looks like both Thomas and Zoe may fall for each other in spite of themselves!

Zoe admitted that she was very attracted to Thomas, but agreed to be a double agent of sorts, observing Thomas around Hope and reporting back to Liam and Steffy as a condition of her re-employment at Forrester Creations, and if what appears to be happening between Zoe and Thomas is real, many of the fears Brooke and Liam have of Thomas continuing to be obsessed with Hope and trying to get her back may actually cease to exist!