Bold And The Beautiful Spoilers: Steffy Forrester Takes A Huge Risk – Will It Pay Off 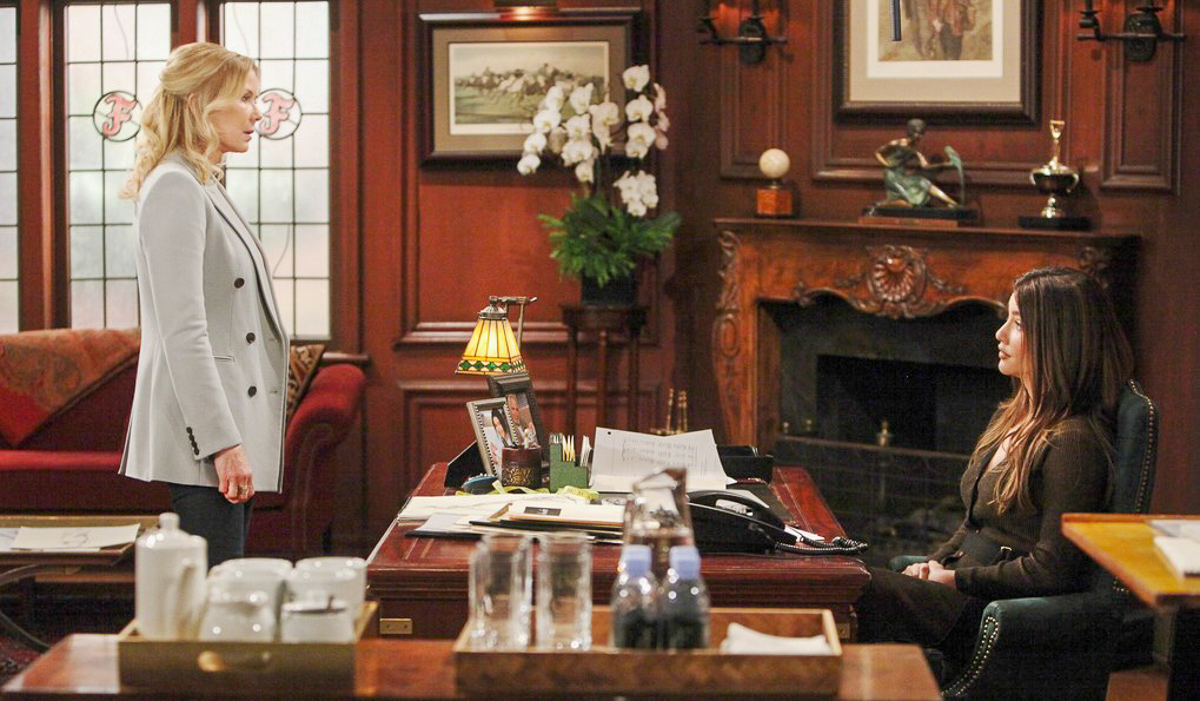 Brooke Logan (Katherine Kelly Lang) couldn’t believe what Steffy Forrester (Jacqueline MacInnes Wood) was doing on ‘The Bold and the Beautiful’. How could she possibly agree to hire Zoe Buckingham (Kiara Barnes) after what she did to Hope Logan (Annika Noelle) and to Steffy?

Well, Steffy’s tell to Brooke answered the question raised within B&B’s pages of dialogue and above. Zoe isn’t trusted, she’s a needed part of the plan.

Bold And The Beautiful Spoilers – Steam Working Together Makes Sense

Liam Spencer (Scott Clifton) has no bones about discussing his distrust. He thinks Thomas Forrester (Matthew Atkinson) is putting on a front and remains a danger to Hope, among others.

Clifton’s character’s pitch to Steffy played off the other forever connection he has. Like Hope, Steffy is the mother of one of his daughters. But instead of being Thomas’ point of obsession, Wood’s character is Thomas’ sister.

The former ‘Steam’ is working together in order to either prove Thomas is actually reforming, which both Liam and Steffy are actually hoping for, or to verify through a third party (Zoe) that his brain remains off balance.

B&B Spoilers – Ties To Hope Logan Cause For Serious Concern

Having Hope voluntarily agree to become Douglas Forrester’s (Henry Joseph Samiri) adoptive mother wasn’t something Liam, or Steffy wanted. Liam sees Hope’s choice as dangerous, as it ties her to Thomas more deeply than ever. Steffy feels that Hope can’t be trusted with this type of legal power and may be angling for more.

Now, after outright rejecting Thomas’ pitch to be the lead designer on Hope’s eponymous fashion line, Noelle’s character was basically forced to use his services. That wasn’t actually necessary, as the world is filled with many talented designers. But the audience suspended disbelief as this part of the storyline was forwarded.

In linking herself to Thomas at work, Hope has created a second connection to the man who was (and still is) obsessed with her. While Thomas continues to deny his unhealthy interest in Hope, B&B fans know otherwise.

‘The Bold and the Beautiful’ Spoilers: Liam Takes A Page From Thomas’ Playbook – Manipulation and Recklessness Abound https://t.co/bNI8shaUZx pic.twitter.com/EasO3vfADS

Brooke wasn’t relieved to learn what Steffy confided. However, she is encouraged in knowing that Thomas’ sister shares her concern and is willing to do something about it.

There is risk for Steffy in widening the circle of those in the know. Sure, Brooke could reveal this secret plan to Ridge Forrester (Thorsten Kaye) while under duress in the near future. But more likely, she could pass the information along to Hope, or talk about it while Thomas overhears it.

Hope’s awareness would be a double-edged sword, as she’d gain useful knowledge. But she would also need to develop a believable and sustained demeanor whenever Thomas and Lope are around.