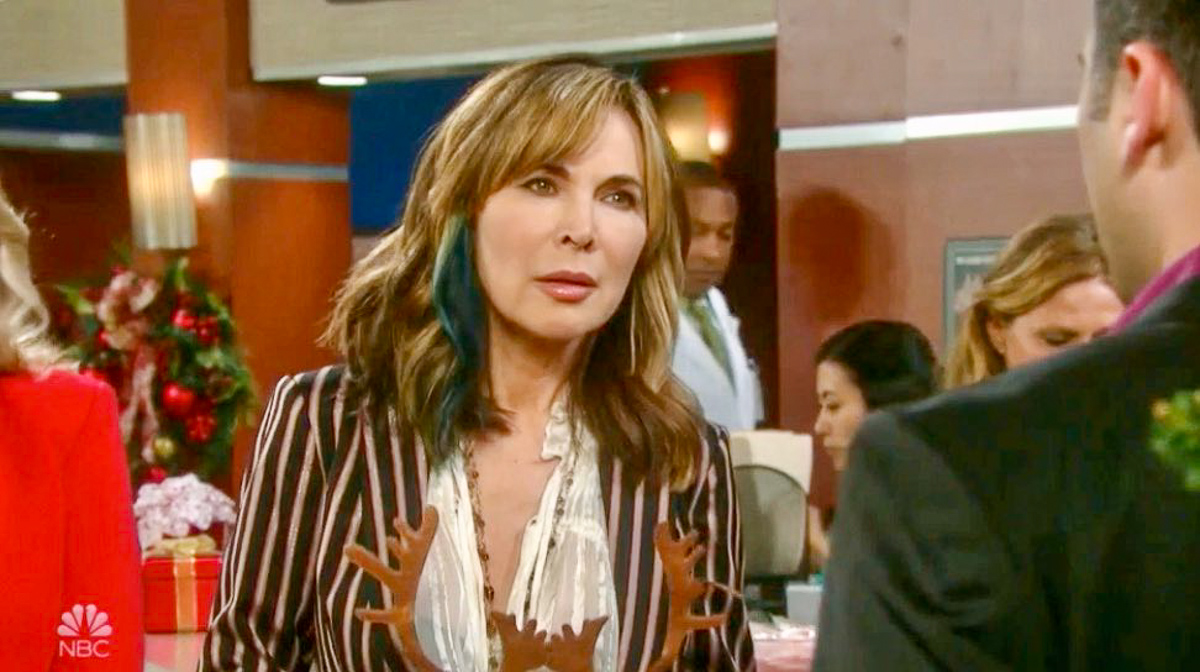 Days of Our Lives spoilers tease that Kate Roberts (Lauren Koslow) will become frustrated with Stefano DiMera (Stephen Nichols) and threaten to expose him in an upcoming episode of Days of Our Lives!

Stefano is getting on Kate’s nerves, as she has been finding it increasingly difficult to hide him out since there has been police presence and an investigation into what was found in his lair! Detective Rafe Hernandez (Galen Gering) has been particularly troubling, since he is after Dr. Wilhelm Rolf (William Utay) like a dog after a bone, and recognized the fact that what he thought was Rolf’s lair was so full of Stefano-esque items such as his original portrait that had been missing from the DiMera mansion for over a year, and the characteristic Strega liquor and the chessboard!

Princess Gina Von Amberg aka Hope Brady (Kristian Alfonso) tried to convince him that Rolf was such a loyal henchman of Stefano’s that he collected mementoes of the probably dead Stefano but Rafe doesn’t quite seem to be totally buying the story, although he didn’t have a problem with Rolf having stayed there in the abandoned loft. He recently interrupted an argument between Gina and Kate over whether Stefano could return, which of course, he cannot and so Kate is the only person who can hide him for the time being.

Roman Brady (Josh Taylor) is also suspicious, knowing that Kate has been hiding a man in her room. As long as it doesn’t interfere with her work he considers her love life her own business, but a secret live-in boyfriend would be another matter entirely! Of particular interest to Roman would be why he has to be kept a secret? Is he a married man fooling around? Can’t her lover pay for a room at the Salem Inn? He didn’t believe her story about the boot he found under her bed although he didn’t go for a search for its owner! Then there was the day Marlena Evans (Deidre Hall) visited and saw Stefano’s ring on the dresser! Kate is getting tired of lying to her friends – lying to her friends for her own purposes would be one thing, but doing it for Stefano is getting to be a real drag!

Kate might come to the point of reminding him there is a perfectly good wine cellar at the DiMera mansion he could hide out in, he just needs to be better prepared to stay there than she was when she and Ted Laurent (Gilles Marini) were locked in there by Kristen DiMera (Stacy Haiduk)! He’ll have to bring his own bottles of Strega, she and Ted finished off the champagne!

Plus, the gatehouse is empty now that Ciara Brady (Victoria Konefal) moved into the Kiriakis mansion and Ben Weston (Robert Scott Wilson) is in prison! Why doesn’t he just take his things and hide out there? Kate will come to the point where if he is not willing to find another place to hide on his own, even after she gives him some suggestions, she will become frustrated to the point of threatening to expose him!