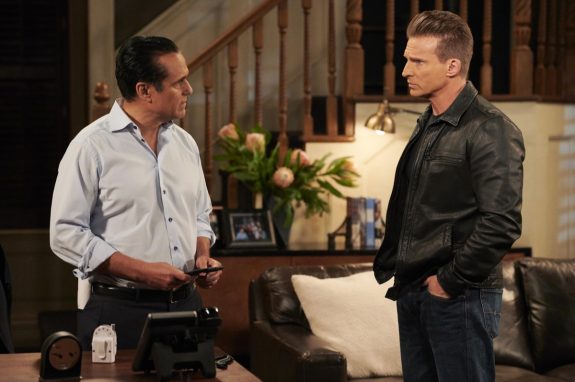 Jax tells Carly that Nikolas Cassadine (Marcus Coloma) has disappeared. Jax explains to Carly that Nik just wants to destroy Valentin Cassadine (James Patrick Stuart). Jax is waiting to see what happens and then step in. Carly cannot wait for this to be over. Carly is under enough stress and needs this taken care of. Jax promises to always be there for Carly.

General Hospital’s Curtis Ashford (Donnell Turner) arrives and speaks to Ava Jerome (Maura West). Ava calls Nina Reeves (Cynthia Watros) and demands she follows through with their plan. Valentin Cassadine and Charlotte Cassadine (Scarlett Fernandez) interrupts her. Nina hangs up on Ava. Nina takes the flowers and admits they are beautiful. Charlotte wants to go riding, Nina refuses. Charlotte goes to find a toy. Valentin mentions they will be family in a number of hours. Valentin still plans to sue for full custody. Nina doesn’t want Valentin’s past to cause him to lose Charlotte. Valentin plans to make sure Nina and Charlotte are safe. Charlotte mentions her bodyguard. Charlotte tells Valentin her mom has a picture of her bodyguard on her phone.

General Hospital’s Sonny Corinthos (Maurice Benard) is getting an update on Carly. Jason Morgan (Steve Burton) arrives and wonders if something is wrong at the warehouse. Sonny is having something checked on. Jason wonders if he needs to know what is going on. Jason asks for Carly, Sonny says she’s not there. Jason asks if Sonny’s man is watching Carly for him. Sonny admits to having Carly followed. Jason tries to calm the situation and convince Sonny to talk to Carly.

Sonny feels like Jason is siding with Carly. Jason tries to explain that Sonny could be making things worse. Sonny admits to being upset over Mike Corbin (Max Gail). Sonny tells Jason that Mike gets worse at night. Jason promises to check on Mike for him. Jason suggests Sonny talk to Carly. Sonny gets an update on Carly. Sonny’s man tells him what he overheard. Carly arrives and argues with Sonny. Carly says it’s time she tells Sonny what is going on.

Sam and Willow get an invitation to Shiloh Archer’s (Coby Ryan McLaughlin) memorial services. Harmony Miller (Inga Cadranel) joins Sam and Willow. Harmony is there for a job interview. Harmony knows nothing about the text. Harmony thinks Daisy Kwan (Kelsey Wang) is behind this. Sam wonders why any of them have been invited. Willow is glad that Harmony isn’t involved. Harmony is determined to do better for herself and Willow. Harmony explains she has a friend in long-term care. Jason arrives and Harmony thanks him for his help. Jason tells her to make this second chance count. Sam asks Jason if he got an invitation to the memorial too. Sam questions why anyone would want Shiloh’s enemies at his funeral.

General Hospital’s Julian insists Brad go get some rest or take a walk. Julian wants Brad to meet him on the pier. Sam tries to calm Willow down. Brad runs into Carly on the pier. Carly offers to help with Wiley anytime. Brad is having a hard time with his. Brad says if it weren’t for Nelle he wouldn’t be in this position to begin with. Julian interrupts Carly and Brad’s conversation.

Carly leaves but Sonny’s man stays behind. Sonny’s man hears Julian say something about crossing Sonny and Michael Corinthos (Chad Duell) and take the information back to Sonny. Julian joins Ava who advises him to find out who Wiley’s guardian is. Valentin arrives and hears Ava say Julian doesn’t want a codicil showing up and ruining everything. Valentin listens in on the rest of their conversation.