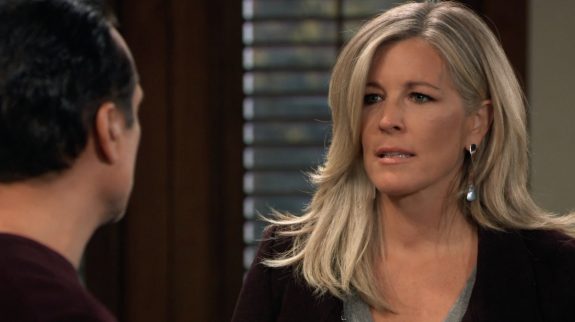 General Hospital (GH) spoilers for Thursday, January 2, tease that Carly Corinthos (Laura Wright) will come clean. She knows this secret with Jasper “Jax” Jacks (Ingo Rademacher) is taking a toll on her marriage, so she’ll spill all the Nikolas Cassadine (Marcus Coloma) details. Carly will urge Sonny to remain calm after he learns the truth. She won’t want Sonny lashing out and making things worse.

Carly will talk about visiting Jax’s house to confront him about Josslyn Jacks (Eden McCoy). She found it odd that Jax was hesitant to let Joss move in, but the reason became clear after Nik appeared. General Hospital spoilers say Carly will also explain Nikolas’ agenda. He’s been in hiding due to his mission to take back the Cassadine estate and recruited Jax to help him with it.

General Hospital Spoilers: Michael And Sasha And Willow And Chase Feel The Fallout Of Nelle’s Plan

Naturally, this info will leave Sonny upset with Jax. He’ll note that Nikolas is a fugitive and by providing help, Jax committed a crime. However, it’s not wise to use this news against Carly’s ex. After all, Jax could turn right around and expose Sonny’s Dev Cerci (Ashton Arbab) secret. Carly will hopefully offer a stern reminder of that and convince Sonny to stand down.

Other General Hospital spoilers say Nina Reeves (Cynthia Watros) will pick up the DNA results. She’ll get proof from GH that Valentin Cassadine (James Patrick Stuart) was behind the Sasha Gilmore (Sofia Mattsson) deception. Of course, that’s not what Sasha claimed after it all blew up. She took the blame and tried to salvage Valentin’s relationship with Nina.

Sasha will once again fight for Nina and Valentin’s future on Thursday. Nina will decide she’s done with Valentin, but Sasha will push her to reconsider. She’ll want Nina to remember that Valentin did everything out of love. Sasha will hope Nina can move past her anger and hold onto the happiness she’s found with her family, including Charlotte Cassadine (Scarlett Fernandez).

Speaking of Charlotte, she’ll have a tense conversation with Laura Webber (Genie Francis). Laura will likely try to make Charlotte understand that her secret bodyguard isn’t real. She may even point out that the picture is of Nik, who’s believed to be dead. Nevertheless, Charlotte will make it clear that she knows her bodyguard is real and has talked to him repeatedly.

While Laura deals with this crisis, Jason Morgan (Steve Burton) will mull over another one. Sam McCall (Kelly Monaco) was just invited to Shiloh Archer’s (Coby Ryan McLaughlin) memorial along with Willow Tait (Katelyn MacMullen). Of course, this stirred up questions about who’s holding this memorial for Shiloh and why.

Jason will continue to ponder this mystery in Thursday’s GH episode. He may do some digging in hopes of figuring out who’s responsible – especially since this person could be plotting revenge.