The Bold and the Beautiful Spoilers: Tuesday, December 31 – Brooke & Ridge Reminisce – Thomas Takes His Relationship With Zoe To The Next Level 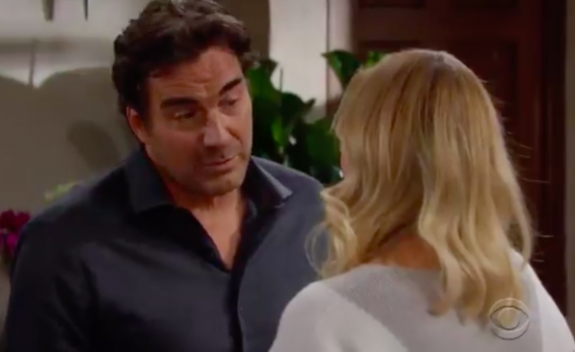 The Bold and the Beautiful spoilers for Tuesday, December 31, tease that the action’s really heating up on the CBS soap. But before we get to that, we have a quick programming note. B&B will air a new episode on Tuesday on the east coast, whereas on the west coast, the show will be preempted for The Sun Bowl. Then on Wednesday, January 1st, an encore episode will air on the east coast, while the new episode from Tuesday, December 31st will air on the west coast.

So, depending on where you live, you’ll see the next new episode of B&B on either Tuesday or Wednesday. On that episode, Brooke Forrester (Katherine Kelly Lang) and Ridge Forrester (Thorsten Kaye) will spend some time reminiscing. As B&B viewers know, they recently signed divorce papers to end their marriage. Ridge hasn’t filed the papers yet, since he’s hoping they can still work out their differences and save their marriage.

Bold And The Beautiful Spoilers: Steffy Forrester Takes A Huge Risk – Will It Pay Off

It appears that Brooke and Ridge will take a look back over their fondest memories. That means that B&B viewers will likely see some flashbacks of some of “Bridge’s” key moments in recent years. Ridge will also ask Brooke to spend Christmas with the Forresters, although it’s unlikely that Brooke will agree to do so, since it would necessarily mean spending time with Thomas Forrester (Matthew Atkinson).

It also looks like “Bridge” will discuss where they go from here, as Ridge will reveal that he hasn’t yet filed their divorce papers. That will probably be music to Brooke’s ears, since she doesn’t want the divorce any more than Ridge does. However, they still have a huge problem between them…Thomas. But once Ridge learns that Thomas is dating Zoe Buckingham (Kiara Barnes), it looks like he’ll suggest that they reconcile.

Bold And The Beautiful Spoilers: Thomas Forrester Ramps Up His Efforts To Make Hope Logan His

Meanwhile, Thomas will escalate his efforts in his plan to get Hope Logan (Annika Noelle) all for himself. As B&B viewers know, he just romanced Zoe at the Forrester mansion, and the two went upstairs to get intimate. According to B&B spoilers, the two will spend the entire night together and will wake up the next morning side by side.

Of course, Zoe is supposed to be working for Liam Spencer (Scott Clifton) and Steffy Forrester (Jacqueline MacInnes Wood) to discover what Thomas’ intentions are for Hope. Liam believes that Thomas is still obsessed with Hope and that he’s manipulating her into thinking he’s over her…and of course, he’s right about that.

The Bold and the Beautiful Star Denise Richards Planning A Huge Move – Is She Leaving Los Angeles? https://t.co/GRXT3mM6Ji pic.twitter.com/iLWOK4Gbda

However, Thomas is determined to prove that he’s moved on from Hope. He wants everyone to think that he’s with Zoe now and has no interest in Hope, so that he can keep working as the lead designer on Hope For The Future. That’s the only way he can stay close to Hope, and he knows it.

Well, now that Zoe and Thomas have made love, Thomas’ ruse will be in full force. B&B spoilers say that he’ll even invite Zoe to the Forrester Christmas dinner as his plus-one, so he’ll really be ramping up his plan. He’ll want everyone to believe that they’re a genuine couple, even though it’s all a big ruse on his part.

Of course, Brooke and Liam are probably still going to be skeptical of Thomas’ arrangement with Zoe. Brooke just doesn’t trust that a fling with a new woman means that Thomas will be 100% over Hope, and it looks like Liam will worry that the relationship with Zoe is just part of Thomas’ manipulative plan…which, of course, it is.