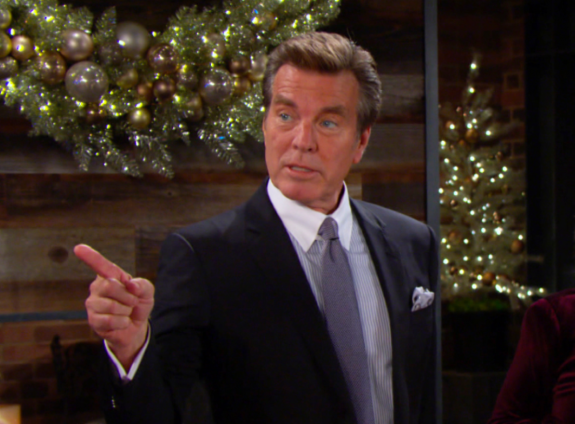 The Young and the Restless (Y&R) spoilers for Tuesday, December 31, tease that Jack Abbott (Peter Bergman) will meet with Phyllis Summers (Michelle Stafford) at Society after Phyllis wanted to meet. They’ll see Adam Newman (Mark Grossman) there, and it will be apparent that Phyllis is still peeved with him. Jack will wonder what Adam did to Phyllis, but she won’t say.

Next on Y&R, at Nick Newman’s (Joshua Morrow) place, he’ll tell Chelsea Lawson (Melissa Claire Egan) that Adam asked Phyllis to seduce him in order to break up their relationship. She won’t be happy that Nick didn’t tell her this sooner, and when Nick asks what they’re going to do about it, she’ll reply that she’ll handle it since she was the prize.

Chelsea will then head to Adam’s penthouse, where she’ll blast him for his actions. He’ll say that it was a cheap move that he regrets taking, but that he can’t take it back. He’ll go on to say that he was desperate to fix things, which will irritate Chelsea since he was trying to decide her future for her.

The Bold and the Beautiful Spoilers: Liam Proposes to Hope, But There’s One Condition

Adam will then profess his love for her, and he’ll ask her to open her heart and admit that she loves him, too. But Chelsea will think that he’s confused and will tell him to stop chasing the past. Adam will say that he needs her, and that he needs their family to be reunited. He’ll point out that Nick makes her feel safe, but that he can make her feel whole.

Next on Y&R, Theo Vanderway (Tyler Johnson) and Summer Newman (Hunter King) will pitch an idea to Kyle Abbott (Michael Mealor), who will like the idea and compliment Theo. Theo will note that the compliment must have been painful for Kyle. Soon, Lola Abbott (Sasha Calle) will arrive with food, and it will be revealed that Theo has been tasting and providing feedback on her new recipes.

Later, Summer and Theo will jab each other – Summer will insist that Theo wants Lola, and Theo will insist that Summer wants Kyle. Then after the ladies have gone, Theo and Kyle will argue about work, which will lead to an argument about their sordid New York past. Jack will walk in as they’re arguing and will want to speak to Kyle privately.

Next on Y&R, Jill Abbott (Jess Walton) will talk with Chance Chancellor (Donny Boaz), who will be getting a room at the Grand Phoenix. They’ll discuss their respective holiday visits with family, and Chance will tell Jill that he’s staying in Genoa City and will work there, rather than on the force. Jill will think it might not be a good fit.

Abby Newman (Melissa Ordway) will then come along and Jill will get the picture why Chance wants to stay in Genoa City. Chance will tell Jill that he and Abby are dating, but that’s it just fun for now. Later, Abby will invite Chance to accompany her to the Abbott-Newman New Year’s Eve party, and he’ll happily accept.

Jill will then head to Devon Hamilton’s (Bryton James) penthouse, where the two will talk about Devon’s first Christmas without Neil Winters (Kristoff St. John). Devon will say that Elena Dawson (Brytni Sarpy) as really been there for him. Talk will turn to Colin Atkinson (Tristan Rogers) and Jill will promise Devon that she’ll get his money back. Devon will say that whoever is involved will pay.

Young And The Restless Spoilers: Summer Newman Makes An Accusation

Finally, on Tuesday’s new episode of Y&R, Phyllis and Nick will catch up at Crimson Lights. Nick will relay that he told Chelsea about Adam’s indecent proposal. He’ll think that Adam will do his best to talk his way out of it, and Phyllis will realize that Nick’s afraid that Chelsea will fall for Adam’s excuse.

Nick and Phyllis will be talking about their friendship when Summer walks in and sees them together. Nick will get a call and have to leave, and Summer will turn to her mom, assuming that Phyllis is pursuing Nick again. Phyllis will say that’s not the case, and that Nick’s life is too complicated.