Days Of Our Lives Spoilers: Kristen Uses Gabi To Get What She Wants 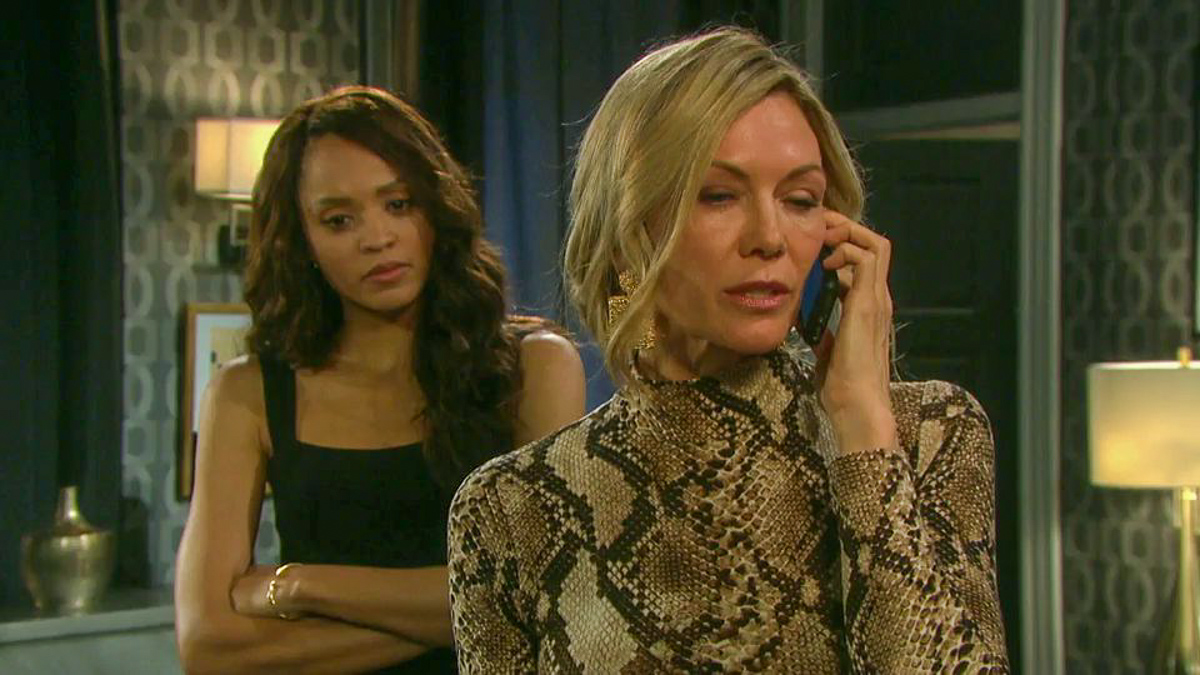 Days of Our Lives spoilers tease that Kristen DiMera (Stacy Haiduk) will use Gabi Hernandez DiMera (Camila Banus) to get what she wants in an upcoming episode of Days of Our Lives!

Days of Our Lives Spoilers – There Are Two Things That Kristen DiMera Wants: DiMera Enterprises And Brady Black

There are two things that Kristen wants: DiMera Enterprises and Brady Black (Eric Martsolf)! Days of Our Lives viewers will recall that Kristen and Gabi have fought over DiMera Enterprises for over a year, and that the two are enemies. Kristen even locked Gabi in the wine cellar at the DiMera mansion one time along with her late husband Stefan DiMera (Brandon Barash), and Gabi nearly tore her Nicole Walker (Arianne Zucker) mask off her when they got in a catfight while Kristen was still impersonating Nicole!

There is a lot of history between the two women, none of it good, and certainly not peaceful! Gabi would not be a lot of help is getting Brady back, but Kristen can definitely use her to get DiMera Enterprises back under her control!

Kristen’s brother, Chad DiMera (Billy Flynn) also has a bad history with Gabi, although it didn’t start out that way. Long before he ever met Abigail DiMera (Kate Mansi) and got involved with her, he dated Gabi for a short time when they were younger, but then left her for Mia McCormick (Taylor Spreitler) and Gabi eventually moved on as well. Mia was one of two women Will Horton (Chandler Massey) was involved with, Gabi being the other.

Gabi and Abigail were once close friends as well, but now are frenemies at best, after Gabi falsified paternity records and tests so Charlotte DiMera (Chloe Teperman) would be Stefan’s daughter instead of Chad’s. But even though Chad and Kristen don’t totally get along, one thing they do have in common is wanting to get Gabi out of their father’s company! Kristen really wants the company for herself, but getting rid of Gabi is the first step and Chad is a strong ally in that regard!

Days of Our Lives Spoilers For Dec 30 – Jan 3: Stefano DiMera Reveals Himself, But As Steve Johnson https://t.co/46XAVzdKuE pic.twitter.com/D6sqgu4CjB

Kristen will have to trick Gabi in some way into relinquishing control over DiMera, or find some dirt on her that the DiMera board members will find appalling enough to fire her over. Kristen knows about the phone app that Gabi procured from Visionary Bionics, a company under the DiMera Enterprises umbrella, to control Julie Williams’ (Susan Seaforth Hayes) pacemaker.

She also knows that this app is what Gabi used to force Lani Price (Sal Stowers) into dumping Eli Grant (Lamon Archey) at the altar, and she also has noticed that she still wears her brother Stefan’s wedding ring on a chain around her neck, even though she’s been involved with Eli for at least a year now – and Kristen noted that Gabi wasted no time in getting busy with Eli when Stefan was barely cold in the ground. That kind of disrespect to a DiMera family member must be something that the board would fire her over, and Kristen will make sure that they know it, using Gabi’s own actions against herself to get the family company out from under her control!