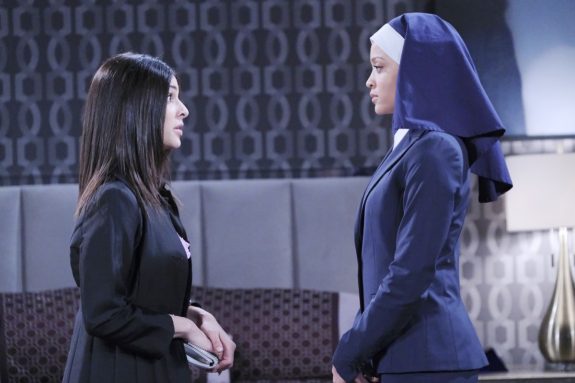 Days of Our Lives (DOOL) spoilers for Thursday, January 2, tease that more stunning moments are on the way. We should mention that Days will be preempted on Wednesday, January 1. Fortunately, DOOL will return with an all-new episode on Thursday, so they’ll get right back in the action.

Days of Our Lives Spoilers: Nicole Tells White Lie To Keep Kristen And Brady Apart – But For How Long?

Now that we’ve covered that programming note, let’s dive in! For starters, we have to talk about the shocker that unfolded at Julie’s Place. “Steve Johnson” aka Stefano DiMera (Stephen Nichols) just made his big Salem comeback, so the other guests were naturally left reeling. Days of Our Lives spoilers say we’ll see some mixed reactions as everyone discusses this bombshell on Thursday.

John Black (Drake Hogestyn) considers “Steve” to be his best pal, so he looked pretty happy to see him. Even so, John understands that “Steve” has made major mistakes. He gets why there are other Salemites dealing with pain over this sudden “Steve” sighting, so he should be sensitive to that.

Since “Hope Brady” aka Princess Gina Von Amberg (Kristian Alfonso) showed up with “Steve,” that should bring suspicions for Marlena Evans (Deidre Hall). She doesn’t trust “Hope,” so she may feel like there’s more to the story here. As for Kayla Brady (Mary Beth Evans), she’ll be terse with Steve on Thursday. Kayla will have a lot of strong emotions to process, but she won’t want Justin Kiriakis (Wally Kurth) to see how upset she is.

Days Of Our Lives Spoilers: Kayla Brady Will Hide Her Sorrow And Anger

Instead, Kayla will hide her sorrow and anger. She’ll hold most of her questions until a private confrontation with “Steve” on Friday – and that’s when Kayla’s fury will really be unleashed! In the meantime, “Steve” will face backlash from Justin and try to avoid saying anything that might expose his true identity.

Other Days of Our Lives spoilers state that Kristen DiMera (Stacy Haiduk) will blast Nicole Walker (Arianne Zucker). She’ll voice her displeasure over that kiss between Nicole and Brady Black (Eric Martsolf), but Brady won’t get why Kristen cares. He’ll contend that Kristen’s supposed to be married to God, but Kristen will make it clear that they broke up. She’ll ditch the nun’s habit and reveal the red dress she was hoping to wear on the New Year’s Eve date they once planned.

Nicole will pipe up about Kristen reverting to form and argue that Brady shouldn’t give his shady ex another chance. Days of Our Lives spoilers say Nicole’s meddling won’t go over well! Kristen will attack Nicole and spark a heated catfight, so Brady will get stuck in all the drama.

Speaking of being stuck in drama, Eli Grant (Lamon Archey) should find himself in a similar position. He just showed up at Kristen’s room with Gabi Hernandez (Camila Banus), which led to the shock of seeing Lani Price (Sal Stowers) back in town. Days of Our Lives spoilers say Gabi’s rage will explode as she hurls vandalism accusations. She’ll have some harsh words for Lani, so Eli may intervene before things escalate any further.

It looks like some fantastic scenes are ahead. We’ll give you updates as other Days news and rumors emerge. Stay tuned to DOOL and don’t forget to check back often for the latest Days of Our Lives spoilers, rumors, updates and news.