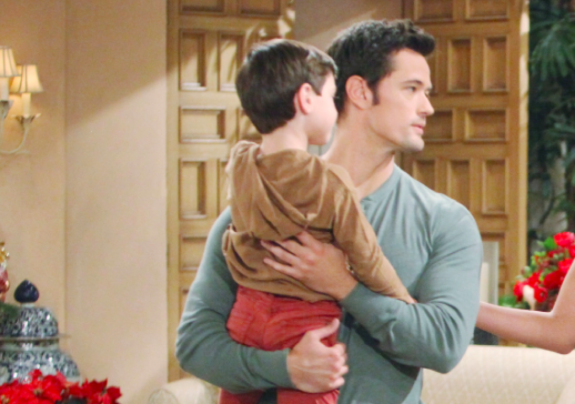 The Bold and the Beautiful spoilers for Thursday, January 2, tease that Hope Logan (Annika Noelle) will find herself in an uncomfortable position. As B&B viewers know, Thomas Forrester (Matthew Atkinson) is still obsessed with her, even though he has officially embarked on a romantic relationship with Zoe Buckingham (Kiara Barnes).

Well, on Thursday’s episode of B&B, Thomas will give Hope an unexpected surprise, and that surprise will make her feel unsettled. Exactly what Thomas gives her remains to be seen – but it could be a present for the holiday, perhaps something signifying that they are a family with Douglas Forrester (Henry Joseph Samiri).

Whatever the case, it looks like the surprise will give Hope pause and make her wonder whether Thomas is really over her. It may lead to some confusion, since Hope knows that Thomas is currently sleeping with Zoe. There are sure to be some awkward moments, much like when Thomas made an inappropriate gesture toward Hope at Forrester Creations recently.

The Bold and the Beautiful Spoilers: Liam Proposes to Hope, But There’s One Condition

B&B Spoilers: Ridge Forrester Has Renewed Hope For His Marriage

Meanwhile, on Thursday’s episode of B&B, Ridge Forrester (Thorsten Kaye) will feel optimistic. As B&B viewers know, both he and Brooke Forrester (Katherine Kelly Lang) have been feeling depressed about the current state of their marriage. As is stands, Ridge has possession of the signed divorce papers, but he hasn’t filed the papers yet.

Unfortunately, “Bridge” can’t seem to get to a place of agreement when it comes to Thomas. Brooke strongly believes that Thomas is “sick” and a psychopath who needs professional help, and Ridge refuses to turn his back on his son. Brooke wants Ridge to admit that Thomas is unstable, which he won’t do, and Ridge wants Brooke to forgive Thomas, which she won’t do.

Despite their impasse when it comes to Thomas, both Brooke and Ridge still love each other very much and they’d like for things to be different. And on Thursday’s B&B episode, Ridge will start feeling a bit more hopeful about things when he learns more about Thomas’ new relationship with Zoe.

As B&B viewers know, Thomas is trying to convince everyone that he and Zoe are a hot new item, so that everyone thinks he’s moved on and is no longer obsessed with Hope. He made sure that Ridge saw himself and Zoe come downstairs after their night together, to solidify the big ruse. It looks like Ridge right witness Thomas and Zoe together some more, perhaps at the Forrester Christmas dinner.

At any rate, Ridge will come to believe that Thomas is now happily with Zoe and is over his obsession with Hope. And that will lead him to think that perhaps there is hope for his marriage to Brooke. In fact, he’ll probably want to tell Brooke right away that Thomas has moved on and is no longer a threat to her daughter.

The Bold and the Beautiful’ Spoilers: Fulton’s Stock Rising – Shauna and Flo In Demand https://t.co/HiIND4ZcSQ pic.twitter.com/k54puroe5F

But of course, Brooke knows something that Ridge doesn’t – that Zoe is part of a plot designed by Liam Spencer (Scott Clifton) and Steffy Forrester (Jacqueline MacInnes Wood). They have enlisted Zoe to spy on Thomas and to find out his true intentions for Hope. So, if Ridge comes to Brooke with news that Thomas is now with Zoe, that’s probably not going to be too persuasive to her.

And that will probably confuse Ridge and leave him wondering why Brooke isn’t moved by Thomas having started a new relationship with another woman. Of course, Brooke won’t be able to tell Ridge about Liam and Steffy’s plot, so he won’t have any sense of why Brooke still doesn’t trust Thomas.