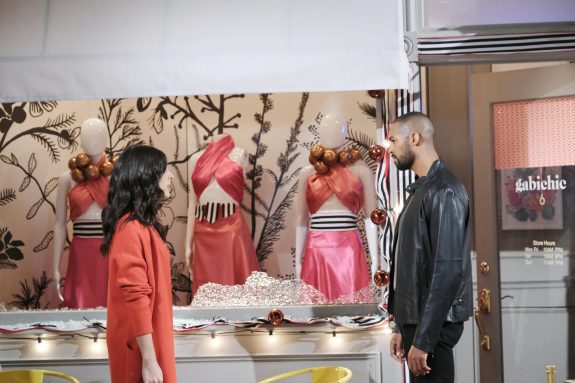 Days of Our Lives (DOOL) spoilers update for Thursday, January 2, teases that “Steve Johnson” aka Stefano DiMera (Stephen Nichols) will cause quite an uproar at the New Year’s Eve bash. He just arrived with “Hope Brady” aka Princess Gina Von Amberg (Kristian Alfonso), but he won’t exactly be welcomed with open arms. Of course, there’ll be a few partygoers like John Black (Drake Hogestyn) who are thrilled to see “Steve’s” face again – even if his behavior while he’s been gone has been atrocious.

However, Justin Kiriakis (Wally Kurth) won’t appreciate “Steve” just showing up out of the blue like this. He may point out that “Steve” managed to make it home for a party but not Adrienne Kiriakis’ (Judi Evans) funeral! Justin will be most upset about how this is affecting Kayla Brady (Mary Beth Evans).

Although Kayla will reassure Justin, he’ll be able to see that she’s rattled and broken over this “Steve” sighting. “Steve” burned Kayla big time, but she’ll delay her big showdown with him. Kayla will indeed step forward to look “Steve” in the eye, but she’ll keep their conversation brief. Then on Friday, Kayla will track “Steve” down to rip into him with everything she’s got!

As for Marlena Evans (Deidre Hall), she may mosey over to “Hope” and wonder how she ended up with “Steve” as her plus one. None of this will make any sense to Marlena, but nothing “Hope” ever does makes much sense either – at least not to Marlena. She doesn’t know this is actually Princess Gina, so “Hope’s” actions have certainly seemed wild and will continue to seem that way.

Days Of Our Lives Spoilers: Lani Price Will Get An Earful From Gabi Hernandez

Other Days of Our Lives spoilers say Lani Price (Sal Stowers) will get an earful from Gabi Hernandez (Camila Banus). Eli Grant (Lamon Archey) just took Gabi over to Kristen DiMera’s (Stacy Haiduk) room in hopes of grilling her about the Gabi Chic vandalism. Lani opened the door instead, so Gabi will be furious over her return to town. She may worry that old blackmail plot will come back to haunt her if she doesn’t put Lani in her place.

Days spoilers say Eli will witness this confrontation, so Gabi can’t get into specifics while he’s in the room. Nevertheless, Lani may not be able to fight back too much due to Gabi’s leverage. Plus, DOOL fans know Lani really did Gabi’s store window. That should become clear to Eli and Gabi, so Lani will have some explaining to do soon.

Days of Our Lives Spoilers: Kristen Confides in Lani About ‘Bricole’ – Will She Help Villain Get Brady Back for Her New BFF? #DAYS #DOOL #DaysOfOurLives #DaysSpoilers #DOOLSpoilers #Salem #NBCDaytime https://t.co/wIwd4n7BTG

DOOL Spoilers: Kristen DiMera Will Have A Tense Exchange With Nicole Walker

Back at the party, Kristen will have a tense exchange with Nicole Walker (Arianne Zucker) and Brady Black (Eric Martsolf). When Brady realizes Kristen’s back and complaining about that “Bricole” kiss, he’ll note that Kristen’s supposed to be married to God. Kristen will suggest they broke up as she ditches the nun look and unveils her steamiest red dress. She’ll insist she came home to reunite with Brady, but Nicole won’t think that’s wise.

After Nicole discourages Brady from this reunion, Days of Our Lives spoilers say Kristen will fly off the handle. She’ll lunge forward to start a physical confrontation, but Brady will break things up and wonder what he’s going to do about all this drama! We’ll give you updates as other Days news and rumors emerge. Stay tuned to DOOL and don’t forget to check back often for the latest Days of Our Lives spoilers, rumors, updates and news.