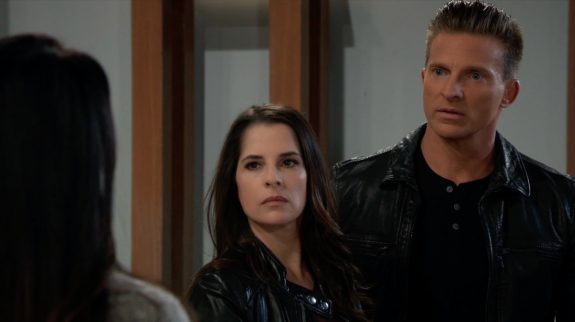 Jax will try to be menacing as he tells Ava he doesn’t want Nina hurt. He’ll ask for confirmation that Ava’s understood, but Ava obviously won’t be scared of Jax or anybody else. She’s going to do whatever the heck she wants no matter what Jax has to say about it!

At GH, Nina will open the DNA results envelope and get evidence that Valentin lied to her. The results will show exactly what Liesl Obrecht (Kathleen Gati) predicted and will completely turn Nina against Valentin. In a private moment with Nina, Sasha Gilmore (Sofia Mattsson) will ask how long Nina’s known that she wasn’t acting alone.

Nina will get emotional as she prepares to give her answer. She’ll probably admit she never really bought Sasha’s cover-up. Nina knows Valentin better than anyone, so she could tell this fake daughter scheme was right up his alley. The fact that Valentin doubled down on his deception to back up Sasha’s claims made things even worse.

Nevertheless, Sasha will encourage Nina to fight for love as well as her family. She can see that Valentin and Nina share something special. Sasha understands that Valentin’s a pretty messed up individual, but he adores Nina despite his many flaws. So does Charlotte Cassadine (Scarlett Fernandez), who would be devastated if Nina called off yet another wedding to her papa.

Sasha’s speech will at least make Nina mull this over a bit longer. Nina will also get some advice from Jax at some point. He’ll hope to talk Nina out of a public spectacle, but Nina won’t be the one causing it in the end. It looks like Nikolas Cassadine (Marcus Coloma) is set to disrupt the nuptials in a big way!

Until then, Valentin will fret over the codicil still existing. He’ll snap at Martin Gray (Michael E. Knight) over what could be a serious problem. Meanwhile, Charlotte will argue with Laura Webber (Genie Francis) about that “secret bodyguard” of hers. Laura will gently try to help Charlotte understand that this bodyguard doesn’t exist. The pic is of Charlotte’s dead uncle, so Laura just won’t think it’s possible.

Charlotte will insist she’s indeed seen and spoke to a man who looked just like that – one who assured her that he’d get rid of all the baddies. Laura’s in for a rude awakening soon enough, but let’s shift gears and talk about Carly Corinthos’ (Laura Wright) secret. She’s been keeping Nik’s survival from Sonny Corinthos (Maurice Benard), but she’ll finally tell Sonny everything on Thursday.

Once Carly reveals her encounter with Nik after Halloween and his plan to reclaim the Cassadine fortune, General Hospital spoilers say Sonny will consider his next move. He’ll worry Carly when he mentions that by assisting a fugitive, Jax committed a crime. However, Jax has some leverage since he could get Dev Cerci (Ashton Arbab) deported and Sonny in trouble for helping him.

General Hospital Spoilers: Carly Corinthos Will Do Everything In Her Power To Keep Peace With Sonny And Jax

Carly will do everything in her power to keep the peace between Sonny and Jax, but that may be a difficult task. Speaking of difficult tasks, Jason Morgan (Steve Burton) will face one along with Sam McCall (Kelly Monaco). This whole Shiloh Archer (Coby Ryan McLaughlin) memorial mystery will definitely stump them.

Jason pointed out that someone could be plotting revenge, so he’ll battle concerns about what’s looming and how it’ll affect Sam. If anyone needs to stay dead and buried, it’s Shiloh! It appears that’s what Sam will tell Jason as they discuss this vengeful threat and how to handle it.