The Bold and the Beautiful Spoilers: Thursday, January 2 – Ridge Hopes For A Reconciliation With Brooke – Thomas’ Surprise Unnerves Hope 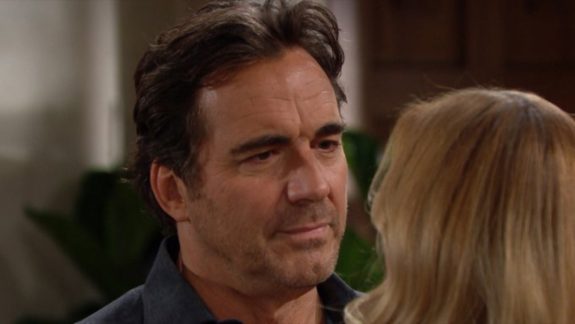 The Bold and the Beautiful spoilers for Thursday, January 2, tease that Ridge Forrester (Thorsten Kaye) will have renewed hope for his marriage to Brooke Forrester (Katherine Kelly Lang). As B&B viewers know, Ridge and Brooke recently signed divorce papers, but Ridge has told Brooke that he hasn’t yet filed the papers. He’s still holding out hope that their marriage can be saved.

Well, it seems that on Thursday’s episode, Ridge will approach Brooke with an overture to save their marriage once again. Of course, Ridge has tried to reconcile with Brooke before, and his attempt have fallen flat because of their inevitable disagreement on the issue of Ridge’s son Thomas Forrester (Matthew Atkinson).

But now, Ridge will think that he’s found a reason why he and Brooke may be able to get back together. Ridge will find himself convinced that Thomas has moved on romantically and is over his prior obsession with Hope Logan (Annika Noelle). It looks like Thomas will pull out all the stops during the Forrester Christmas celebration to convince everyone that he’s now solid in his new relationship with Zoe Buckingham (Kiara Barnes).

Bold And The Beautiful Spoilers: Thomas Forrester Is Still Obsessed With Hope Logan

Of course, B&B viewers know that this is just a ruse on Thomas’ part. He’s still very much obsessed with Hope, and in fact his relationship with Zoe is all part of his big master plan to get back together with Hope. As convoluted as it seems, he thinks that if he convinces Hope that he’s moved on, then she’ll let her guard down and he can get closer to her.

His big plan is to continue to work with Hope on her line at Forrester Creations. But the only way he can do that is if Hope believes that he’s truly moved on with someone else and is no longer a threat to her. And so far, Hope seems to be buying it – she’s a little skeptical now and then, but overall she seems to be hoping that Thomas and Zoe are a real item.

At any rate, Ridge will find himself honestly believing that Thomas is now ensconced in a real relationship with Zoe, and that will give him hope for his marriage to Brooke. He’ll think that Brooke might finally be able to find it in her heart to let go of her animosity toward Thomas, since he’s with Zoe now.

‘The Bold and the Beautiful’ Spoilers: Brooke Won’t Give Up Two Fights – Tough Year Ahead https://t.co/4S44kc2Bjh pic.twitter.com/Sw9lOAXmCl

Meanwhile, on Thursday’s new episode of B&B, Hope will be feeling unnerved. As B&B viewers know, Thomas still wants Hope and he’s doing his best to get closer to her under the guise of being co-parents to Douglas Forrester (Henry Joseph Samiri). He even made sure to arrange it for Hope and Liam Spencer (Scott Clifton) to stop by the Forrester mansion on Christmas so they could spend a little time together.

Of course, part of the reason he wants Hope to be there is to witness him and Zoe together, so that he can continue the ruse that he’s moved on. But another side of him just wants to see Hope on Christmas, and it seems that he’ll end up giving her some sort of surprise that will make her feel unsettled.

It remains to be seen exactly what Thomas will give Hope, but it could be a Christmas present of some sort, or perhaps another drawing by Douglas depicting all of them together as a family. We’ll see what it ends up being, but B&B spoilers are clear that it will make Hope momentarily uncomfortable.