The Young and the Restless Spoilers: Thursday, January 2 – Chelsea Celebrates With Adam After Breakup With Nick – Tessa Gets An Unnerving Text 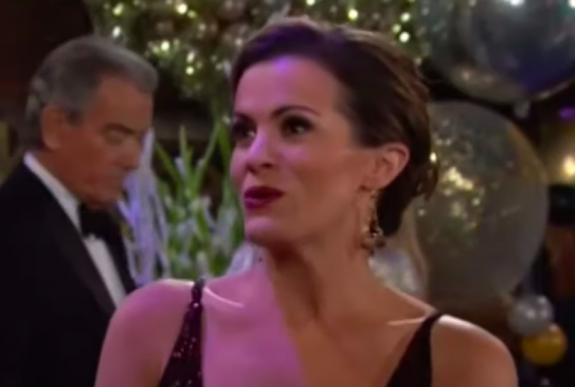 Nick Newman (Joshua Morrow) and Chelsea Lawson (Melissa Claire Egan) will arrive, greeting Chance Chancellor (Donny Boaz). They’ll all head toward Nikki and Victor, who will acknowledge Nick’s birthday and say hello to Chance. Adam Newman (Mark Grossman) will then arrive, along with Theo Vanderway (Tyler Johnson), who will get a nod from Kyle.

Next on Y&R, Nick will be surprised to see Phyllis Summers (Michelle Stafford) appear at the party, since she had previously declared that she wouldn’t be attending. Phyllis will gripe to Chelsea about Grand Phoenix business, and while she’s at it she’ll remark that Chelsea is stringing Nick along while encouraging Adam. Chelsea will fire back that she confronted Adam about his indecent proposal, but Phyllis will balk at that.

Summer will notice Phyllis and Chelsea’s discussion, and afterwards she’ll accuse her mother of causing problems so that she can justify going after Nick again. Phyllis will say that she has no plans to get involved with anyone, and while she does so she’ll look in Chance’s direction.

Victoria Newman (Amelia Heinle) will then arrive to the party, while Victor walks up to Adam at the bar and remarks that his New Year’s resolution is to keep better tabs on his medications. He’ll then say that he’s glad that Adam is looking out for Connor Newman (Judah Mackey), and that he himself is still alive and well.

Across the room, Nikki and Victoria will discuss Billy Abbott (Jason Thompson). Nikki will encourage Victoria to get Billy to go to a meeting, while Victoria says that she doesn’t want Billy to backslide. And nearby, Phyllis will needle Chance about how she can keep a secret when she wants to.

Over at the bar, Nikki will tell Adam that she got Connor’s school principal to let him stay enrolled there, while across the room Jack will listen to Nick worry about possibly losing Chelsea and that perhaps they’re just together because he’s “safe.”

Nick will finally have had enough, and he’ll talk to Chelsea privately, telling her that it’s clear that she should be with Adam and not him. He’ll say that he’s got to let her go. Emotionally, she’ll thank Nick and tell him that he’s a wonderful man. They’ll kiss and hug, which Adam will see before leaving.

Near the bar, Theo will talk to Lola, and they’ll discuss the fact that she made his favorite dish before he asks her to dance. Suddenly Summer will break things up between them. Theo will then tell Summer privately that he’s setting a new goal…to eliminate what’s in his way.

Next on Y&R, Billy and Amanda Sinclair (Mishael Morgan) will be at the little bar outside of Genoa City together. He’ll apologize to her for not being more talkative tonight, but he’ll note that he can breathe and be himself with her. She’ll say that she feels the same way when she’s with hm.

Throughout the course of their conversation, Amanda will tell Billy about how she felt free when she was in high school, then she went to law school and started doing all the right things. Billy will relate to her story, and he’ll say that he’s glad that he left Jabot and that it was the right move for him.

Billy will note that he just wants to be himself, and Amanda will wish that she could stop feeling like she always has to be in control of things. Before leaving, Billy will say that she has his number if she needs anything.

Young And The Restless Spoilers: Theo Needles Summer About Her Obvious Attraction To Kyle https://t.co/vubQYdNBIN pic.twitter.com/Fbm7dQVJsE

Next on Y&R, at Crimson Lights, Sharon Newman (Sharon Case) and Rey Rosales (Jordi Vilasuso) will be ready to ring in the New Year. Mariah Copeland (Camryn Grimes) and Tessa Porter (Cait Fairbanks) will come in and join them. Turns out, Sharon will have decided to stay open late for the holiday.

Tessa will sing for the crowd, and afterwards she’ll get a text from Tanner Watts (Chase Coleman), which Mariah will see and make a big deal over, since he’s a platinum recording artist. The text will say that he wants to meet with Tessa, and Mariah will think that’s awesome, while Tessa looks unnerved by the whole thing.

Young And The Restless Spoilers: Genoa City Rings In The New Year

Back at Society, Billy will arrive right before midnight. As the clock strikes midnight, Billy will go to Victoria and various kisses will be shared around the room. Nick will of course be without Chelsea, and he’ll be with Summer, who will say that this will be their best year yet.

Finally, on Thursday’s new episode of Y&R, Chelsea will return home to Adam’s penthouse. At the window, they’ll watch the fireworks and listen to Auld Lang Syne play. They’ll take hands and look into each other’s eyes.