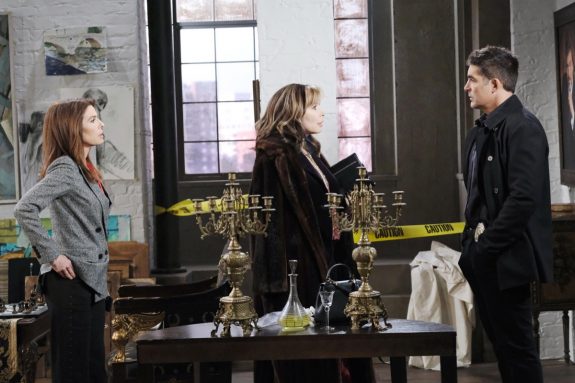 Days of Our Lives (DOOL) spoilers for Friday, January 3, tease that Ciara Brady (Victoria Konefal) will throw her full support behind Ben Weston (Robert Scott Wilson). As the day of his final appeal arrives, Ben will definitely battle concerns. He’ll need Ciara to be his rock as he awaits news on his fate.

However, taking a trip to see Ben could be awfully risky. Ciara pulled off a trick with Marlena Evans’ (Deidre Hall) help on Christmas, but she may be on her own this time. If Ciara takes the gamble and goes to see Ben anyway, you can bet Victor Kiriakis (John Aniston) and Xander Cook (Paul Telfer) will find out about it.

Regardless, Days spoilers say Xander and Victor will indeed discover Ciara’s lies on Friday. They’ll get proof that Ciara’s been deceiving them, so they’ll have to figure out how to deal with that. Over with “Steve Johnson” aka Stefano DiMera (Stephen Nichols), he’ll get a visit from Kayla Brady (Mary Beth Evans). Kayla will make her way over to the townhouse for a one-on-one confrontation.

As DOOL fans might expect, this showdown will get heated on Kayla’s end. “Steve” should stay pretty calm, but his cold demeanor will only infuriate Kayla even more. She won’t understand “Steve’s” behavior over the past couple years, but “Steve” won’t clarify much of anything. He’ll simply reiterate that he didn’t come back for Kayla, so she won’t get any answers out of this faceoff.

Days Of Our Lives Spoilers: Rafe Hernandez Will Confide In Roman Brady

Next, Rafe Hernandez (Galen Gering) will confide in Roman Brady (Josh Taylor). Days of Our Lives spoilers say Rafe will talk about how strange “Hope Brady” aka Princess Gina Von Amberg (Kristian Alfonso) has been acting. Roman won’t get it either, but they won’t be able to crack this case just yet.

Other Days of Our Lives spoilers say “Hope” will drop a bomb on Rafe. He’ll push “Hope’s” buttons until she finally fires him from the Salem PD! Of course, that’s only going to further convince Rafe that he’s on the right track. It’ll become very clear to Rafe that “Hope” is hiding something, so he’ll want to find out what it is.

It sounds like some fantastic scenes are coming up. We’ll give you updates as other Days details and rumors emerge. Stick with DOOL and don’t forget to check back often for the latest Days of Our Lives spoilers, rumors, updates and news.